The Shorenstein Center’s Thomas Patterson has analyzed Hillary Clinton’s press coverage during the month of the two political conventions. He presents his findings today in the LA Times:

If Clinton loses, blame the email controversy and the media

My analysis of media coverage in the four weeks surrounding both parties’ national conventions found that her use of a private email server while secretary of State and other alleged scandal references accounted for 11% of Clinton’s news coverage in the top five television networks and six major newspapers, including the Los Angeles Times. Excluding neutral reports, 91% of the email-related news reports were negative in tone. Then, there were the references to her character and personal life, which accounted for 4% of the coverage; that was 92% negative.

….How about her foreign, defense, social or economic policies? Don’t bother looking. Not a single one of Clinton’s policy proposals accounted for even 1% of her convention-period coverage; collectively, her policy stands accounted for a mere 4% of it. But she might be thankful for that: News reports about her stances were 71% negative to 29% positive in tone. Trump was quoted more often about her policies than she was. 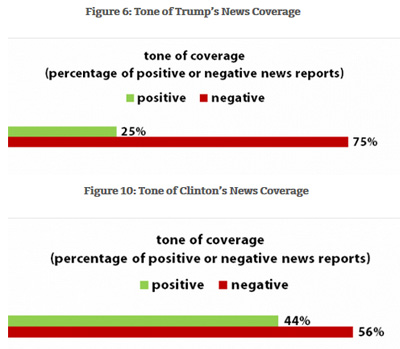 Trump’s claim that Clinton “created ISIS,” for example, got more news attention than her announcement of how she would handle Islamic State.

Luckily, the online version includes a link to Patterson’s report. It tells a different story. During the period Patterson studied, Trump’s news coverage was 75 percent negative, while Clinton’s was 56 percent negative. Overall, the media was harsher toward Trump than it was toward Clinton.

Nonetheless, the fact remains that Trump apparently got significantly more negative coverage than Clinton. What’s frustrating for a lot of Democrats, I think, is that Trump’s voluminous negative coverage doesn’t seem to do him any harm. And that’s largely because of a disconnect about what counts as “negative.” In the normal world inhabited by journalists, lying, cheating, bullying, insulting, and general ignorance are considered bad things. In Trumpworld they’re good things. His followers seem to agree that he’s a bastard, but by God, he’s going to be their bastard.

So, oddly enough, the more negative coverage Trump gets, the better his supporters like him. Whether the small number of undecided voters see things the same way as Trump’s fans is unknown, but the entire election might hinge on it.