Did prime-age men leave the labor force in huge numbers during the Great Recession and then never come back? One way to test this is to look at the trend from 1976-2007 and then extend the line to 2016. If it matches the actual data from 2016, then nothing special happened. The labor market 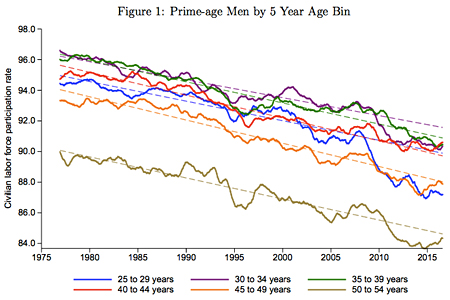 just kept following the same long-term trend as always. Via Brad DeLong, the chart on the right shows what this looks like.

For most age groups, the extended trendline matches the 2016 data. Nothing special happened during the Great Recession and the recovery. There are two exceptions: the blue line and the purple line, which are for men aged 25-34. In that age group, men left the labor force in big numbers during the recession and then stayed out. But why did they stay out? Gabriel Chodorow-Reich has some data to share:

The plurality of the decline in participation is due to increased schooling. This seems benign. The increase in those reporting disability is less so. Using 2000 as a benchmark, the transition rates back into employment for this

group also seem more elastic to a tighter labor market, which is consistent with other evidence.

I’m not sure the increase in schooling is all that benign. If it’s real, that’s fine. But to the extent that it reflects young men hanging out in school merely because they can’t find a job, it’s not so fine. If that represents half the school total, then we have about half a percent of young men in school waiting for a job to come along; another half percent who want a job and can’t find one; and nearly a full percent who are—or claim to be—disabled. All by themselves, those add up to two full points of non-recovery from the Great Recession.

But why only young men, and not any age group over 35, all of whom have recovered to trend levels? The answer is almost certainly not, “Because millennials are treated like crap, you idiot. What do you expect?” But what is the answer? It is a mystery.