Mike Pence won last night’s debate. Pretty much everyone agrees about that. Here’s what everyone also agrees about: Pence lied constantly. It was one of the most widespread observations about the debate: 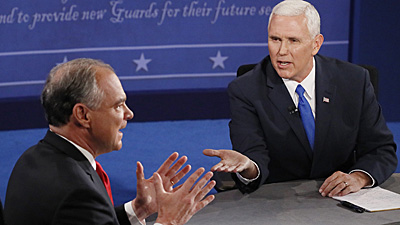 that cameras had recorded him holding.

New York Times, on Kaine’s charge that Pence and Trump have praised Vladimir Putin: “We haven’t,” Mr. Pence protested, even though he himself said on CNN last month that Mr. Putin was “a stronger leader in his country than Barack Obama has been in this country.” But Mr. Pence during the debate flatly denied making that remark.

Guardian: Mostly Pence flatly denied that Trump had made controversial statements and, instead of defending the candidate, resorted to the strategy of gaslighting, by repeatedly challenging known facts to manipulate the truth.

Politico: The main tenet of [Pence’s] strategy was to deny that Trump ever said these things to begin with — despite the fact that many of the statements were both real and a part of the public record.

McClatchy: During the few moments he did address statements Trump made, Pence denied them or even misstated them. “No he hasn’t,” he said repeatedly.

I didn’t have to go looking for this stuff. I just opened up seven debate recaps and found these six. (Only the Wall Street Journal seemed not to notice Pence’s behavior.) So here’s where we are: Pretty much everyone watching the debate agreed that Mike Pence lied over and over about simple stuff that’s on tape and easily verified. And yet pretty much everyone also agreed that he won the debate. Does anyone see the problem here?