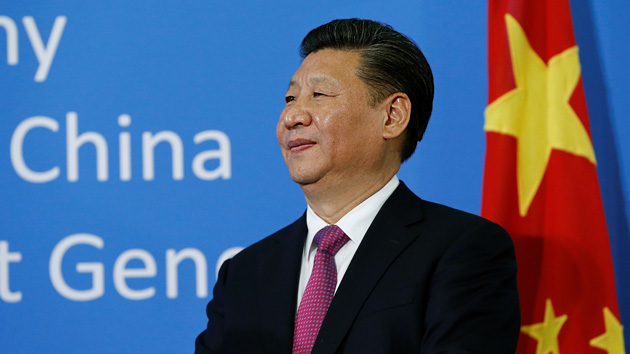 Behold the greatest negotiator our nation has ever seen:

President Donald J. Trump and President Xi Jinping of China had a lengthy telephone conversation on Thursday evening. The two leaders discussed numerous topics and President Trump agreed, at the request of President Xi, to honor our “one China” policy.

That’s a readout from the White House Thursday evening. Here’s the backstory:

December 2: Breaking tradition, Trump “risks China’s wrath” by speaking on the phone with the president of Taiwan.

December 12: Trump goes on Fox News Sunday to poke China further: “I fully understand the ‘one China’ policy, but I don’t know why we have to be bound by a ‘one China’ policy unless we make a deal with China having to do with other things, including trade.”

December through February: China gives Trump the silent treatment. “Stung by an earlier, and unorthodox, telephone call between Mr. Trump and the president of Taiwan, Mr. Xi had not spoken to the American leader since Nov. 14, the week after he was elected….Relations between Washington and Beijing had been frozen since December.”

February 8: Apparently uneasy over Xi shutting him out, Trump finally sends Xi a letter wishing him a happy Chinese New Year. The letter was hand delivered by Mike Flynn: “As a gesture of conciliation, Flynn and his deputy, K.T. McFarland, hand-delivered the letter to China’s ambassador to the United States, Cui Tiankai. Trump wrote that he wished ‘the Chinese people a happy Lantern Festival and prosperous Year of the Rooster.’ He also said he ‘looks forward to working with President Xi to develop a constructive relationship that benefits both the United States and China.'”

February 8: A Chinese surveillance plane “inadvertently” buzzes an American P-3C Orion in the vicinity of the disputed Scarborough Shoal in the South China Sea.

February 9: Trump caves in and agrees to honor the One China policy.

It’s worth noting that this was not just something that “came up” in the phone call. Xi would not have agreed to talk unless Trump explicitly promised beforehand that he would affirm the One China policy and do so publicly. Delivering that promise was probably the real point of Flynn’s meeting with the Chinese ambassador, and it’s why it was specifically mentioned in the readout. A single sentence in a late-night readout was the least humiliating way Trump’s aides could think of for him to publicly knuckle under to China. God knows, Trump would probably go to war before he’d be willing to personally back down in front of the TV cameras.

In any case, Trump really showed them, didn’t he? No matter what kind of spin the White House puts on this, China now knows that Trump’s threats and bluster are entirely hollow. That should do wonders for our negotiations with China on trade issues. And everyone else too.

POSTSCRIPT: Can anyone point me to any great deal that Trump has ever negotiated? I can think of plenty of disasters (Trump Air, the Plaza Hotel, his Atlantic City casinos, etc.), and I can think of plenty of ordinary deals he’s closed (all of his golf courses). But have there been any that were really spectacular? None come to mind, unless you count his ability to talk his bankers into sparing him personal bankruptcy after his businesses went bust in 1990. Or maybe the way he snookered all the poor schmoes who bought stock in his entertainment company when he took it public in 1995.

But how about a straightforward real estate deal where he negotiated a bargain price and made out like a bandit? Are there any?