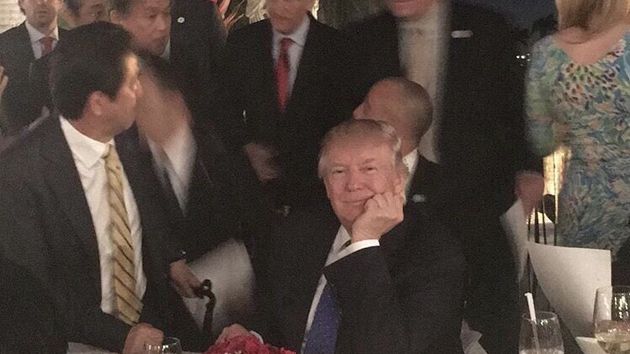 This was the scene at Mar-a-Lago as news came in that North Korea had conducted a missile test. The public is all around. Classified documents are lying on the table. People are on the phone where anyone can overhear them. There is no operational security at all. This picture was taken by some random guest from a few feet away. Trump himself just looks bored by the whole thing. Facebook

John Schindler got a lot of attention over the weekend for his Observer article, “The Spy Revolt Against Trump Begins.” Here’s the bit that raised the most eyebrows:

A new report by CNN indicates that important parts of the infamous spy dossier that professed to shed light on President Trump’s shady Moscow ties have been corroborated by communications intercepts….SIGINT confirms that some of the non-salacious parts of what Steele reported, in particular how senior Russian officials conspired to assist Trump in last year’s election, are substantially based in fact.

….Our spies have had enough of these shady Russian connections—and they are starting to push back….In light of this, and out of worries about the White House’s ability to keep secrets, some of our spy agencies have begun withholding intelligence from the Oval Office. Why risk your most sensitive information if the president may ignore it anyway? A senior National Security Agency official explained that NSA was systematically holding back some of the “good stuff” from the White House, in an unprecedented move.

….What’s going on was explained lucidly by a senior Pentagon intelligence official, who stated that “since January 20, we’ve assumed that the Kremlin has ears inside the SITROOM,” meaning the White House Situation Room, the 5,500 square-foot conference room in the West Wing where the president and his top staffers get intelligence briefings. “There’s not much the Russians don’t know at this point,” the official added in wry frustration.

“Inside” reporting about the intelligence community is notoriously unreliable, so take this with a grain of salt. Maybe it’s true, maybe it’s not. But just the fact that stuff like this is getting a respectful public hearing is damning all by itself. For any other recent president, a report like this would be dismissed as nonsense without a second thought. But for Trump, it seems plausible enough to take seriously. Stay tuned.