While I was out to lunch, I was feeling bummed that I wouldn’t immediately see the CBO score of the Republican health care bill. As Hyman Roth said, “This is the business we’ve chosen.” Still, that’s kind of pathetic, isn’t it?

But I’ve seen it now (click here), and the headline news is CBO’s projection of how many more people will become uninsured compared to Obamacare: 14 million in 2018, 21 million in 2020, and 24 million in 2026. But here’s the thing. The last time I saw a CBO estimate, it projected that Obamacare would reduce the ranks of the uninsured by 27 million people in 2025, and today’s report projects 28 million in 2026. So here’s what the Republican plan looks like: 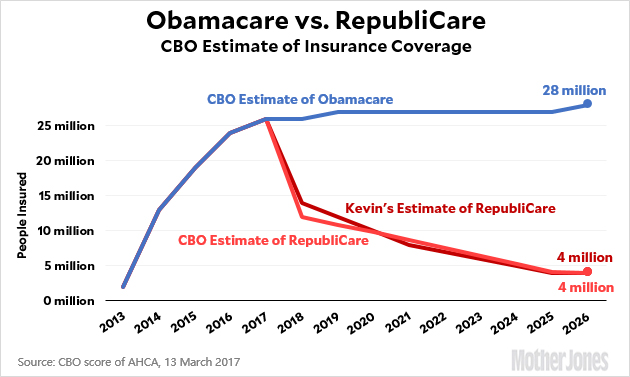 You read that right: CBO projects a decline of 24 million from a baseline of 28 million. Of the 28 million people currently insured because of Obamacare, only 4 million will be left by 2026.

With a couple of corrections because I mistakenly used an old CBO report, this matches almost perfectly my estimate from last week of the impact of RepubliCare. Not bad! Unfortunately, the price of my being right is that 24 million people will be uninsured yet again if Republicans manage to pass their monstrosity of a bill. Here are CBO’s other three main findings:

I’m a little surprised by the last bullet. According to the report, “key factors bringing about market stability include subsidies to purchase insurance, which would maintain sufficient demand for insurance by people with low health care expenditures, and grants to states from the Patient and State Stability Fund which would reduce the costs to insurers of people with high health care expenditures.”

Unless I’m missing something, CBO is projecting “sufficient demand” at the same time they’re saying that demand will crater. As for the stability fund, that comes to $10 billion per year, maybe half of which is actually for high-risk patients. That’s practically a rounding error in the health care market. Something doesn’t smell right here.

That said, the big news is the projection of 24 million people losing health coverage by 2026. I wondered last week if CBO would have the guts to make a projection like this, and it turns out they did. Republicans may try to keep up the pretense that their bill would continue to insure practically everyone, but the truth is just the opposite: almost no one would be covered. And that’s a feature, not a bug.

UPDATE: I’ve changed the headline and the text from 3 million to 4 million. The CBO report I linked above projected that Obamacare would be responsible for a net increase of 27 million insured people by 2025, so I initially used that number for 2026 as well. That left 3 million still insured after a decline of 24 million. But today’s CBO score says the 2026 number is 28 million under Obamacare. So 4 million would be left under the Republican bill.