What do people think about the new CBO report on RepubliCare? I don’t mean us bleeding heart liberals. Naturally we think it’s great since it confirms that the Republican bill will decimate health care in America. But what do conservatives think?

But over on Capitol Hill, Paul Ryan says he finds the CBO’s report “encouraging.” It exceeded his expectations and “gives us even more room to work on good, fine-tuning finishing touches.” Hoo boy. Even Fox News isn’t buying this:

This is some serious happy talk. Ryan must be taking lessons from Trump. In a statement, Ryan says the report confirms that the Republican bill will “lower premiums and improve access to quality, affordable care”—which is, um, a pretty creative reading of the report. More to the point, Ryan is thrilled that the CBO confirms that the bill will provide “massive tax relief.” This is true—though the tax relief is all for the rich—and it’s telling that Ryan doesn’t need to provide any spin on this point.

But what about all those people who will lose coverage? Ryan says, “I recognize and appreciate concerns about making sure people have access to coverage.” He doesn’t say he plans to do anything about this, but at least he appreciates the concerns. You know who else appreciates those concerns? Breitbart News: 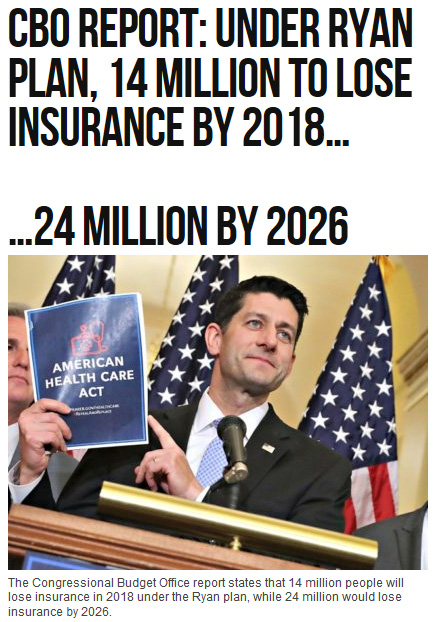 The Drudge Report is pretty much ignoring the whole thing for the moment, as if they’re waiting for some kind of conservative consensus to form before they wade in. National Review is pretty silent too, though Dan McLaughlin writes that “The projections of who will and won’t be insured don’t actually mean anything.” The Weekly Standard’s Chris Deaton has a carefully neutral post up that says millions of Americans “would opt out of purchasing coverage once the federal government stops penalizing them for doing so.” That’s not quite what CBO says, though I admit you have to read the report carefully to recognize this.1

Basically, no one outside of Congress or the White House really wants to defend the Republican bill. There are a few half-hearted gibes at the CBO, but nothing more. I’ll be curious to see if tribal defenses kick in more strongly by tomorrow, once everyone has had a chance to suffer through all the liberal jeers and taunts.

1CBO says that subsidies after 2020 would be “significantly smaller” than they are now and that “some people would forgo insurance in response to higher premiums.” However, they are oddly cagey about exactly how big an effect this would have compared to the elimination of the individual and corporate mandates. I’m not sure what the reason for this is.