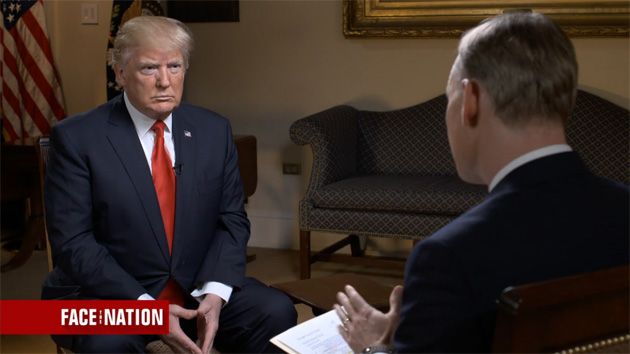 I’m going to go out and throw some frisbees around. In the meantime, enjoy John Dickerson’s interview with Donald Trump about his health care bill:

JOHN DICKERSON: So but in the bill, as it was analyzed, there were two problems. One, and you talked about this with Congressman Robert Aderholt, who brought you the example of the 64-year-old who under Obamacare the premiums–

PRESIDENT DONALD TRUMP: But that was a long time ago, John.

JOHN DICKERSON: But has that been fixed?

PRESIDENT DONALD TRUMP: How? We’ve made many changes to the bill. You know, this bill is–

JOHN DICKERSON: What kind though?

PRESIDENT DONALD TRUMP: –very much different than it was three weeks ago.

JOHN DICKERSON: Help us explain because there are people–

JOHN DICKERSON: –out there wondering what kind of changes.

PRESIDENT DONALD TRUMP: This bill is much different than it was a little while ago, okay? This bill has evolved. And we didn’t have a failure on the bill. You know, it was reported like a failure. Now, the one thing I wouldn’t have done again is put a timeline. That’s why on the second iteration, I didn’t put a timeline.

JOHN DICKERSON: But that’s not in–

JOHN DICKERSON: –this bill. The borders are not in–

Needless to say, it’s not in. It might be in a future bill, but it’s not in the current bill. On the bright side, I’m impressed that Trump even knows about the high-risk pool, even if he doesn’t quite know what it’s called.

We also learned that Trump’s response to North Korea’s missile test is that he’s not happy. What does that mean? “I would not be happy. If he does a nuclear test, I will not be happy.”