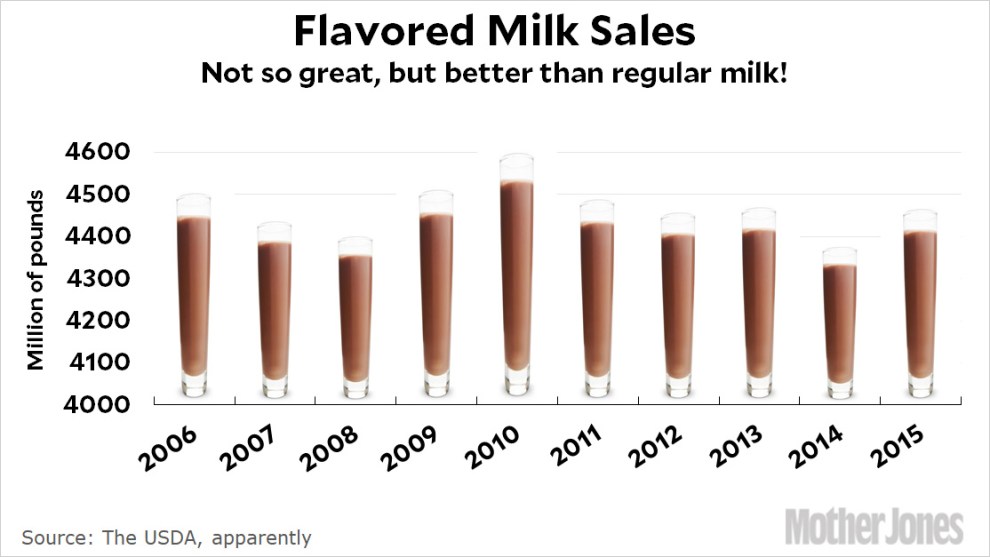 Seven percent of all American adults believe that chocolate milk comes from brown cows, according to a nationally representative online survey commissioned by the National Dairy Council.

….For decades, observers in agriculture, nutrition and education have griped that many Americans are basically agriculturally illiterate. They don’t know where food is grown, how it gets to stores — or even, in the case of chocolate milk, what’s in it. One Department of Agriculture study, commissioned in the early ’90s, found that nearly 1 in 5 adults did not know that hamburgers are made from beef. Many more lacked familiarity with basic farming facts, like how big U.S. farms typically are and what food animals eat.

I think Dewey misses the real question here: Why did the National Dairy Council commission a survey about whether chocolate milk comes from brown cows? I don’t know, and I can find no trace of the NDC’s survey online. However, common sense suggests that it has something to do with the milk industry’s endless battle to convince the American public that chocolate milk is good for you.

I agree, of course, since I think that chocolate anything is good for you. But I’ll concede that Science™ doesn’t really have my back on this. In any case, who cares? I’m pretty sure that 7 percent of Americans believe the sky is blue because it’s surrounded by a giant ocean.

But I do wonder where these 7 percent think white milk comes from?

POSTSCRIPT: Yes, it’s kind of a slow news day. Why do you ask?