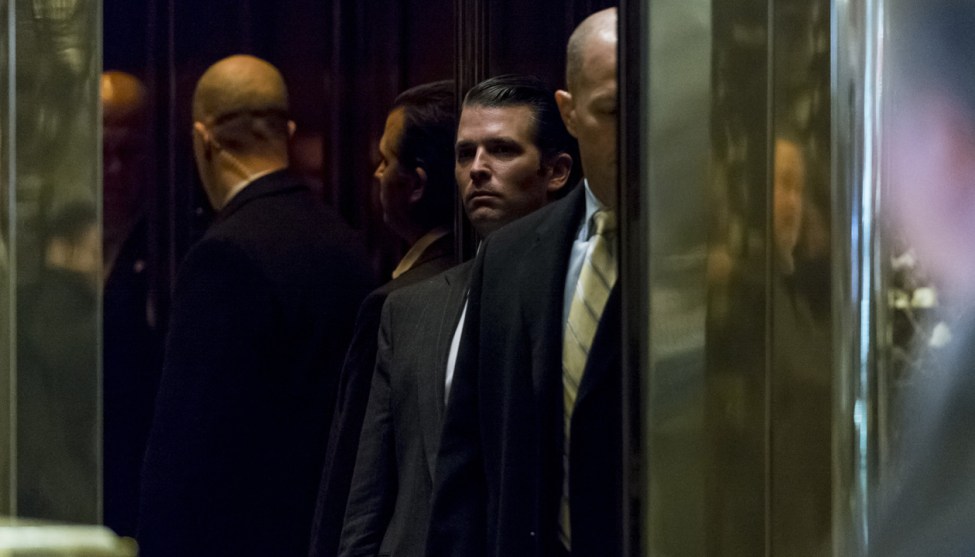 Last September, WikiLeaks sent a private direct message to Donald Trump Jr. via Twitter, suggesting that he look into a new anti-Trump site. This site, as it happens, is now part of Mother Jones, and Don Jr. promised to ask around about it. Which he did. Then, according to Julia Ioffe at the Atlantic, the Trump/WikiLeaks conversation continued:

On October 3, 2016, WikiLeaks wrote again. “Hiya, it’d be great if you guys could comment on/push this story,” WikiLeaks suggested, attaching a quote from then-Democratic nominee Hillary Clinton about wanting to “just drone” WikiLeaks founder, Julian Assange. “Already did that earlier today,” Trump Jr. responded an hour-and-a-half later. “It’s amazing what she can get away with.”

WikiLeaks didn’t respond to that message, but on October 12, 2016, the account again messaged Trump Jr….“Strongly suggest your dad tweets this link if he mentions us,” WikiLeaks went on, pointing Trump Jr. to the link wlsearch.tk….Just 15 minutes after it was sent, as The Wall Street Journal’s Byron Tau pointed out, Donald Trump himself tweeted, “Very little pick-up by the dishonest media of incredible information provided by WikiLeaks. So dishonest! Rigged system!”

Two days later, on October 14, 2016, Trump Jr. tweeted out the link WikiLeaks had provided him. “For those who have the time to read about all the corruption and hypocrisy all the @wikileaks emails are right here: http://wlsearch.tk/,” he wrote.

There doesn’t appear to be anything illegal here, but as Ioffe points out, “At no point during the 10-month correspondence does Trump Jr. rebuff WikiLeaks, which had published stolen documents and was already observed to be releasing information that benefited Russian interests.”

I suppose we already know that Trump would have happily accepted compromising documents straight from Vladimir Putin himself, so this is hardly a surprise. But it’s not exactly a credit to the principled patriotism of the Trump family, either.