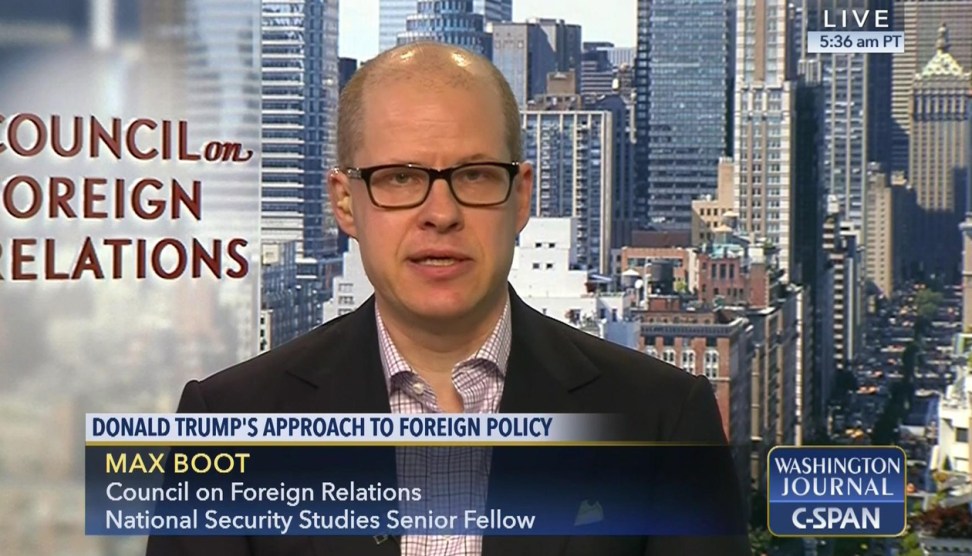 Politico’s Susan Glasser did a podcast last week with Max Boot and Eliot Cohen, both of whom are Republican foreign policy hawks deeply disturbed by the election of Donald Trump. But Boot is clear-eyed enough to see that the biggest damage Trump is doing probably isn’t in the foreign arena:

I think, in many ways, the damage he’s doing at home is even worse, where he’s undermining the rule of law. He’s actively obstructing justice. He’s backing—he’s lending the support of the presidency to monsters like Roy Moore. He is exacerbating race relations. He is engaging in the most blatant xenophobia, racism, and general bigotry that we have seen from the White House.

….I think the ascendancy of Trump…reveals something about the Republican grassroots…there is a lot of prejudice, racism, homophobia, all sorts of dark impulses out there, that I think were largely kept cloaked when you had leaders of the party like Mitt Romney and John McCain, who were fine individuals who did not appeal to the dark side of human nature. But Donald Trump is not a fine individual and he appeals to that dark side, and he has shown how much of the support for Republican candidates around the country is based on some of these dark impulses. And frankly, to me, it’s been unnerving. It’s been deeply disturbing as somebody who was a life-long Republican, because what I see happening is that a lot of the criticisms the Democrats have made about Republicans—and which I resisted for years—have actually been vindicated.

Policywise, Trump is mostly a standard-issue Republican. That’s never been the big reason to fear him any more than any other conservative in the White House. The two big reasons have always been:

Boot is disgusted by Trump’s public bigotry, and finally can’t deny any longer that both Trump and the Republican Party are actively exploiting this for political gain. The sad thing here is not that it took a toxic buffoon like Trump to make this clear, but that Boot is still in a tiny minority in his own party. Most Republicans continue to deny that bigotry has anything to do with anything, despite the overwhelming evidence of two years of Trump. I wonder what it would take to get them to open their eyes?