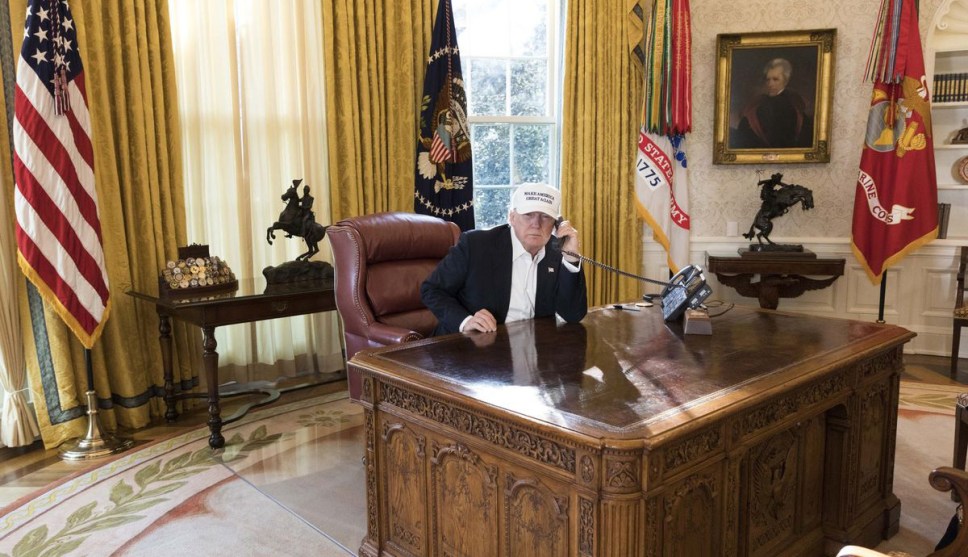 Over the weekend, the White House released this widely-mocked picture of Donald Trump "working to resolve the budget impasse." The fact that it's so obviously a joke is a sign of how seriously modern Washington takes budget issues these days.Joyce N. Boghosian/White House

Ramesh Ponnuru wants to get rid of government shutdowns:

The U.S. has had four partial shutdowns of the federal government in the last 25 years. Each time we have one, we debate who’s responsible: which party is the formal cause of it, which is being less reasonable in budget negotiations. Maybe it’s time instead to debate doing away with the possibility of shutdowns.

There’s no law of nature that requires the federal government to run at partial capacity when Congress and the president can’t agree on a budget bill. Long ago Congress could have passed, and a president could have signed, a law stipulating how the government would operate in case of such a disagreement.

This sounds appealing, and I’d certainly be in favor of eliminating debt ceiling standoffs, which truly are pointless and dangerous. But getting rid of budget-driven government shutdowns would be sort of like banning strikes by labor unions. Sure, strikes are annoying for everyone, but without them there’s no leverage to force a deal to be made. Human nature being what it is, both sides sometimes need the spur of looming catastrophe to force them toward an agreement.

If the government were put on automatic autopilot in the absence of a budget agreement, the incentive to pass a budget would shrivel even further than it already has. Sometimes this might favor Democrats and sometimes Republicans, so there’s no real partisan valence here. But I’d be very careful about “recognizing reality” and doing something like this. Half a century ago Mike Mansfield recognized the reality of filibusters and decided to change the Senate rules so that no one actually had to talk and the Senate could go about its business while simply acknowledging that a filibuster was taking place. Later the rules were changed so that nobody even had to be present in the Senate to keep a filibuster going. But guess what? When the price of a filibuster went down to nearly zero, the number of filibusters skyrocketed and we ended up with the 60-vote Senate we have today. That’s not something Mansfield or anyone else ever expected.

So what happens when the price of a budget deadlock goes down nearly to zero? My guess is that we’d have a lot more budget deadlocks. Contra Ponnuru, then, I might propose something 180 degrees different: pass a law that bans continuing resolutions and shuts down the government on October 1 if there’s no budget. Passing a budget is the prime purpose of Congress, but in recent years both Democrats and Republicans have all but abdicated this responsibility. Maybe they need some incentive to start considering the budget their top priority, not a bit of trivia to be ignored while they fight base-pleasing battles over ideological hot buttons.