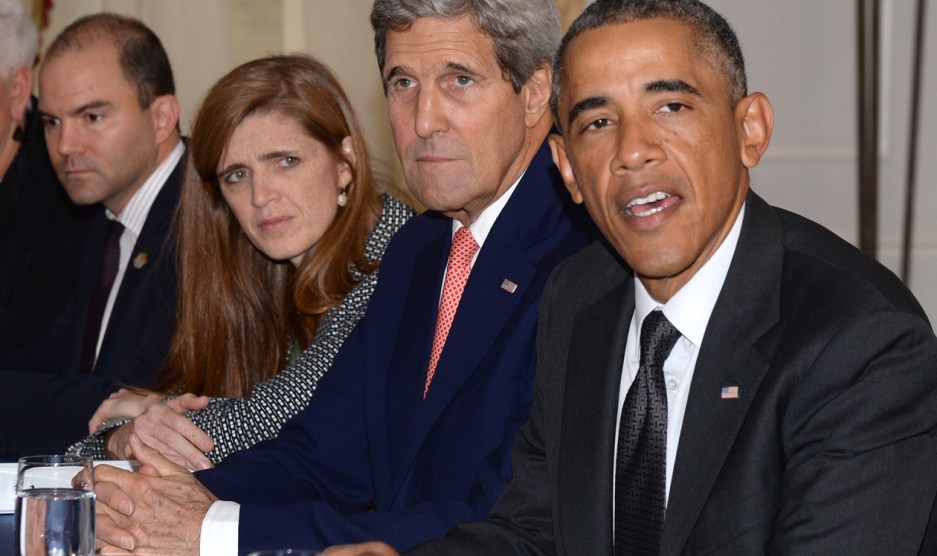 Ben Rhodes is an unlikely target of a sophisticated smear campaign. He's the guy on the far left that you don't recognize, behind all the famous people.Anthony Behar / Pool Via Cnp/DPA/ZUMA

The New York Times has obtained a copy of the report that Black Cube compiled on Ben Rhodes, one of the Obama administration’s biggest proponents of the Iran Deal:

A detailed report about Mr. Rhodes, compiled by Black Cube, a private investigations firm established by former intelligence analysts from the Israeli Defense Forces, contains pictures of his apartment in Washington, telephone numbers and email addresses of members of his family, as well as unsubstantiated allegations of personal and ethical transgressions.

It is unclear who hired Black Cube to prepare the report on Mr. Rhodes and a similar report on Colin Kahl, the national security adviser to Vice President Joseph R. Biden Jr., which were obtained by The New York Times from a source with knowledge of their provenance….There is no evidence in the documents that indicate any connection to anyone in Mr. Trump’s administration….One person with knowledge of the reports suggested that the company had been hired by a commercial client with an interest in opposing the nuclear deal.

Not the Trumpies, then—at least, not directly. Politically, then, this is of only minor interest. But I’d still like know what organization had a commercial interest in killing the Iran deal. It’s just not common for a corporate enterprise to think about smearing a political figure—especially an obscure one—as a tactic for getting what it wants. So does commercial really mean commercial, or does it merely mean “not an elected official”? Maybe a super PAC of some kind? Or a Sheldon Adelson donor type?

I’m pretty tired of everything being about Trump. If he’s truly not involved in this, that makes it even more interesting. Just who was the commercial client?

UDPATE: On the other hand, Julian Borger, who broke this story in the first place, says the “ultimate customer” was the Trump camp:

Most explicit statement yet tying Trump circle and #BlackCube dirty tricks ops…@julianborger: “our sourcing who are close to this private security firm said it was clear that, when the tasking for this went out, that the ultimate customer was the Trump team, the Trump camp.” https://t.co/FzZkeZO0Cx