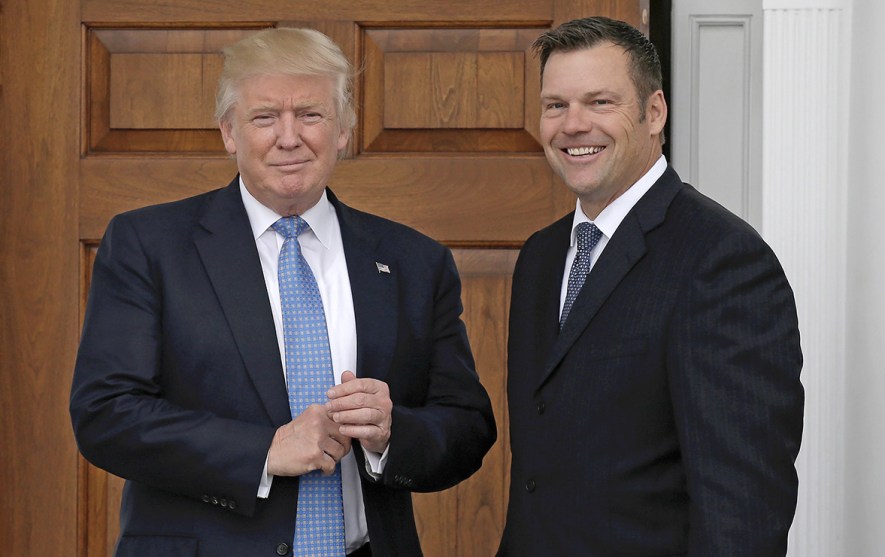 Kris Kobach in happier days with his pal Donald Trump.Peter Foley/CNP via ZUMA

Here’s something to cheer you up. A few years ago, Kris Kobach, the odious immigration hardliner who is currently Kansas Secretary of State, shepherded a voter ID bill through the Kansas legislature. Today, a Republican federal judge struck down the law in an opinion so incendiary it’s a wonder Kobach himself didn’t go up in flames. She ruled that the law was unconstitutional; that Kobach produced no real evidence of voter fraud; that Kobach’s “expert witnesses” were cretins; and that the law prevented tens of thousands of legal voters from casting ballots.

But that’s not the best part. Kobach chose to personally represent Kansas in this case, and he persistently flouted the rules of evidence by failing to disclose documents and repeatedly trying to introduce new data that he had not given opposing lawyers a chance to see:

The disclosure violations set forth above document a pattern and practice by Defendant of flaunting disclosure and discovery rules that are designed to prevent prejudice and surprise at trial. The Court ruled on each disclosure issue as it arose, but given the repeated instances involved, and the fact that Defendant resisted the Court’s rulings by continuing to try to introduce such evidence after exclusion, the Court finds that further sanctions are appropriate.

Rick Hasen tells us about these “further sanctions”:

And Kris Kobach himself gets the ultimate sanction from the court for his failure to comply with the court’s evidentiary rules: he has to go back to school to learn evidence! pic.twitter.com/nBYL1wqOm6

Ha! There’s no one more deserving of being humiliated like this than Kris Kobach. The only question left is whether the voters of Kansas will interpret this as a well-deserved rebuke that makes him unsuitable to become their governor in November; or if Kobach will somehow convince them that it was the act of an elitist judge who loves voter fraud because she’s black. I can hardly wait.