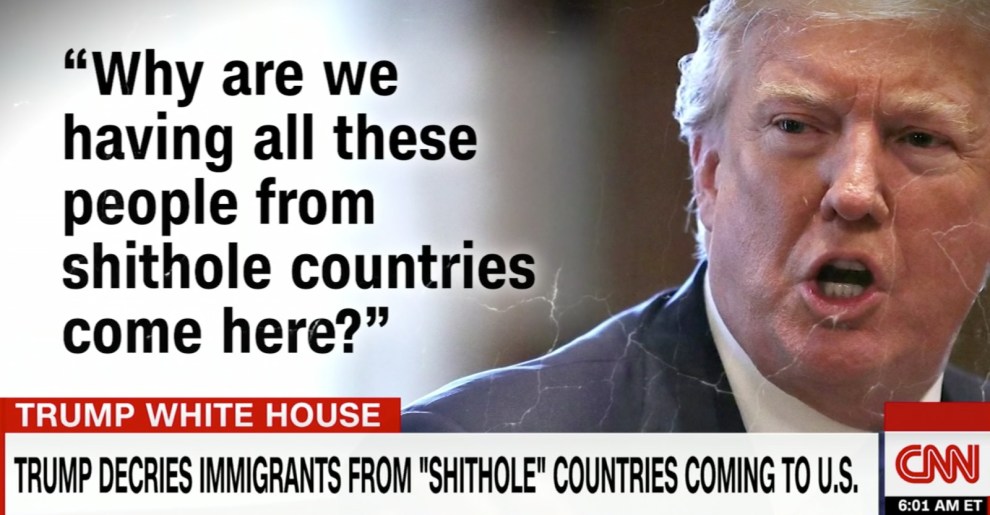 Donald Trump’s worst quality—which has been obvious since the first day of his presidential campaign—is that he’s a race-baiter. He appeals relentlessly to white racial resentment, sometimes explicitly and sometimes a little less so, but always and everywhere in a way we haven’t seen on a national level since Jesse Helms went to his reward.

There are many reasons that Republicans with any integrity should abandon Trump, but this is by far the biggest. Trump’s bigoted behavior is disgusting and despicable.

For those who continue to deny this, here’s a list. It starts on the day he announced his candidacy. It is by no means exhaustive—not even close—and any single item on it could be written off as a mistake or a bad moment. But all of them put together? There’s only one conclusion you can draw.

June 16, in the kickoff to his presidential campaign, calls for the construction of a wall on the southwest border and says of Mexicans: “They’re bringing drugs. They’re bringing crime. They’re rapists. And some, I assume, are good people.”

November 22: Retweets a racist graphic claiming that blacks are responsible for 81 percent of murdered whites. (The actual number is 16 percent.)

December 7: Trump calls for a “total and complete shutdown of Muslims entering the United States.”

January 22: Retweets a bit of anti-Jeb Bush snark from an account called @WhiteGenocideTM.

“@WhiteGenocideTM: @realDonaldTrump Poor Jeb. I could’ve sworn I saw him outside Trump Tower the other day! https://t.co/e5uLRubqla“

February 28, asked about the endorsement of white supremacist David Duke, pretends he has no idea who Duke was: “I just don’t know anything about him.”

April 21, speaking on TV about the plan to replace Andrew Jackson with Harriet Tubman on the $20 bill: “I think it’s pure political correctness”

September 29, avowed white supremacists tell the LA Times that Trump’s campaign has been great for them. Richard Spencer: “Before Trump, our identity ideas, national ideas, they had no place to go.” David Duke: “I love it. The fact that Donald Trump’s doing so well, it proves that I’m winning. I am winning.” Andrew Anglin, editor of the Daily Stormer: “Trump had me at ‘build a wall.’ Virtually every alt-right Nazi I know is volunteering for the Trump campaign.”

January 27: Signs an executive order that (a) temporarily bans visits from residents of seven predominantly Muslim countries and (b) effectively prioritizes the immigration of Christians from the Middle East over Muslims.

February 20: Establishes the Victims of Immigration Crime Engagement office, which is instructed to ensure that crime victims are “provided information about the offender, including the offender’s immigration status.”

May 1, in an interview, dismisses the adamant refusal of the white South to give up slavery in the decades leading up to the Civil War: “I mean, had Andrew Jackson been a little later you wouldn’t have had the Civil War….People don’t realize, you know, the Civil War, if you think about it, why? People don’t ask that question, but why was there the Civil War? Why could that one not have been worked out?”

August 1: The Justice Department announces its intent to focus the civil rights division on litigation “related to intentional race-based discrimination.” This is a reference to affirmative action programs that assist blacks and other minority groups.

August 12, in response to neo-Nazi violence in Charlottesville, refuses to specifically call out white supremacist violence: “We condemn in the strongest possible terms this egregious display of hatred, bigotry and violence on many sides, on many sides.”

August 14, under pressure from his staff, Trump reads a statement forcefully denouncing “the KKK, neo-Nazis, white supremacists and other hate groups,” but later tells his aides the statement was “the biggest fucking mistake I’ve made.”

August 15, backtracking from the previous day’s statement: “You also had people that were very fine people, on both sides. You had people in that group … that were there to protest the taking down of, to them, a very, very important statue and the renaming of a park from Robert E. Lee to another name.”

September 22, speaking to a mostly white crowd, goes after black quarterback Colin Kaepernick for kneeling to protest racism and police brutality: “You know what’s hurting the game? When people like yourselves turn on television, and you see those people taking the knee when they are playing our great national anthem.”

October 20, after hearing a report that crime was up 13 percent in Britain, falsely says it happened “amid spread of Radical Islamic terror.”

December 14, upon leaving her White House job, Omarosa Manigault Newman defends Trump by saying: “The things that he says, the types of pushback that he gives, involve people of color. These are racial exchanges. Yes, I will acknowledge many of the exchanges—particularly in the last six months—have been racially charged. Do we then just stop and label him as a racist? No.”

January 11, asked about protections for people from Haiti and various African countries during a meeting about immigration, replies: “Why are we having all these people from shithole countries come here” instead of more people from Norway?

February 5, in his State of the Union address, for the third straight year, Trump highlights murders committed by undocumented immigrants: “Here tonight is Debra Bissell. Just three weeks ago, Debra’s parents, Gerald and Sharon, were burglarized and shot to death in their Reno, Nevada home by an illegal alien. They were in their 80s and are survived by four children, 11 grandchildren, and 20 great-grandchildren. Also here tonight are Gerald and Sharon’s granddaughter, Heather, and great‑granddaughter, Madison.”

February 20: The LA Times reports that the Trump administration is separating families at the border.

August 21, Omarosa Manigault Newman changes her mind about Trump, saying: “It is very clear Donald Trump is a racist and he’s trying to undermine our democracy.”

I have asked Secretary of State @SecPompeo to closely study the South Africa land and farm seizures and expropriations and the large scale killing of farmers. “South African Government is now seizing land from white farmers.” @TuckerCarlson @FoxNews

March 17, after revelations that (a) Tucker Carlson had referred to Iraqis as “semiliterate primitive monkeys” and (b) Jeanine Pirro suggested that Rep. Ilhan Omar’s hijab might mean she supports sharia law, tweets: “Keep fighting for Tucker, and fight hard for @JudgeJeanine. Your competitors are jealous – they all want what you’ve got – NUMBER ONE. Don’t hand it to them on a silver platter. They can’t beat you, you can only beat yourselves!”

May 22: Treasury Secretary Steve Mnuchin delays plans to put Harriet Tubman on the $20 bill until Trump is out of office. The New York Times reports that this is because he was “concerned that the president might create an uproar by canceling the new bill altogether.”

May 30: The New York Times reports that the origin of Trump’s effort to add a citizenship question to the 2020 census was a study which concluded that it “would be advantageous to Republicans and non-Hispanic whites.”

Today: Jared Kushner swallows nervously and begs off having to comment on Trump’s birtherism and anti-Muslim executive orders.

Q) Has Trump ever said anything racist?

KUSHNER: “Absolutely not. You can’t not be a racist for 69 years then run for president and be a racist.”