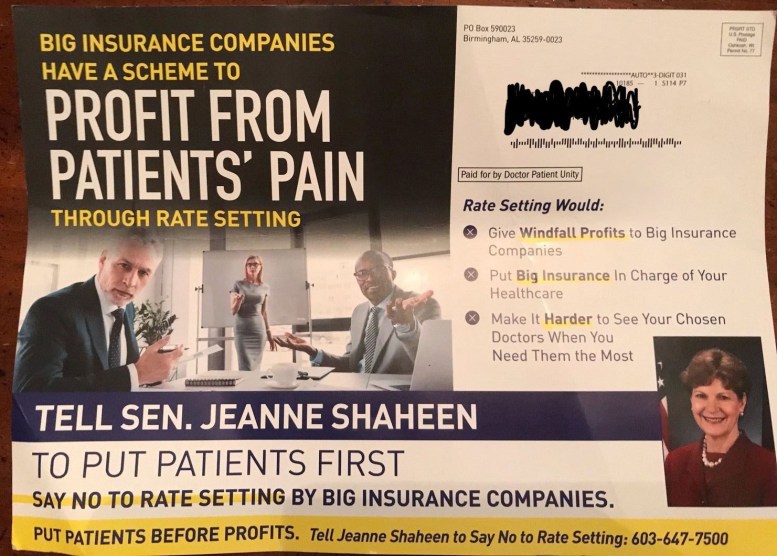 A mailer sent to New Hampshire voters telling them how horrible it will be if surprise out-of-network billing is banned.New York Times

One of the most outrageous aspects of American health care is surprise out-of-network billing. Most people, if they go to a hospital that’s “in-network,” quite reasonably assume that this means “the hospital’s doctors are in-network.” But that’s not the case. Sometimes hospitals contract with doctors who aren’t part of your insurance network, and these doctors can charge whatever they feel like. Your insurer won’t cover this—that’s what out-of-network means—which means that when you get home you’re likely to be greeted by a $40,000 anesthesiology bill.

This is obviously bad, and both Democrats and President Trump favor legislation to end it. However, there’s one group that thinks out-of-network billing is just fine: the private equity firms that own the medical groups that specialize in out-of-network care.

But this presents a problem: how do you make it sound bad to prohibit surprise out-of-network billing? Hmmm.

Here’s the answer: Attack the ban as “rate setting” by “big insurance companies.” Then add some scary stuff about not being able to see your doctor anymore and “profiting from patients’ pain” and you’re all set. Who wants to involved with anything like that?

But the best part of this particular attack ad comes at the very end: “Put Patients Before Profits.” How Trumpian! The whole point of out-of-network billing is to allow doctors to make lots of money at the expense of their patients. But who cares? You just say the opposite and then get huffy if anyone suggests you’re being a wee bit untruthful.

Out-of-network billing is hardly limited to medical groups owned by private equity firms. Still, they’re the only ones with the organized greed that’s required to mount an advertising campaign telling us that up is down and black is white. I wonder if it will work?