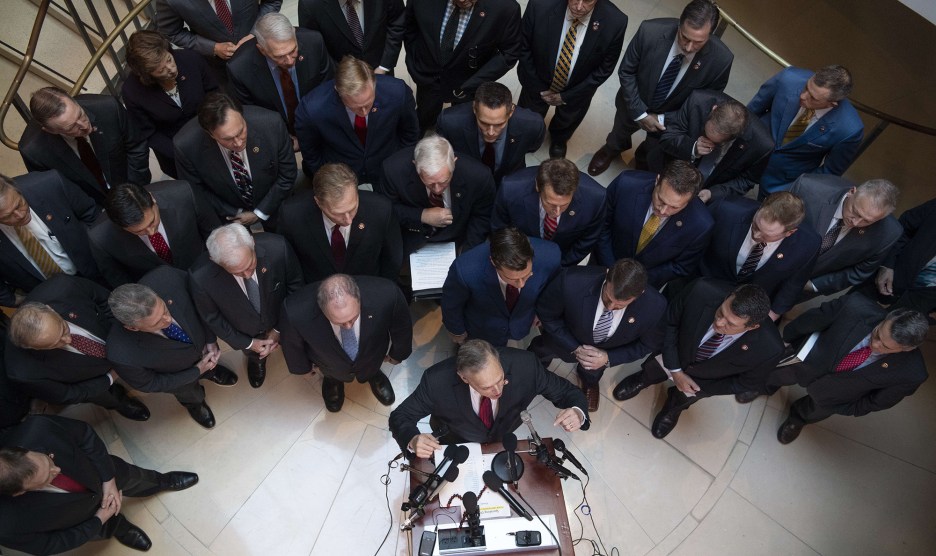 Marc Thiessen has taken on the thankless task of defending the ridiculous riot Republicans staged on Wednesday, as they gathered in the Capitol basement to protest closed impeachment hearings being held in a SCIF, a room specially designed to be immune to electronic eavesdropping. Let’s hear his case:

Let’s be clear: There is nothing wrong with holding hearings behind closed doors as long as there is due process. During the Nixon impeachment much of the evidence was presented in closed-door sessions. But there was not a flood of leaks from those executive sessions, as we are seeing today. And unlike today, the minority could issue subpoenas, and the president’s counsel was present to cross-examine witnesses and present evidence. Secrecy and fairness go hand in hand. One without the other is corrupt.

Funny thing: Thiessen mentions Watergate but fails to mention the Clinton impeachment. Why? Because in 1998 the House barely even bothered to hold impeachment hearings, relying instead on the Starr Report to do its work for them. And needless to say, there were no national security implications to Bill Clinton’s semen stains, and therefore no need for closed hearing held in a SCIF.

As for leaks, permit me a huge guffaw. Since there were no hearings to speak of in Clinton’s case, there were no leaks either. But that’s because Ken Starr’s shop had been leaking with abandon for months and months while it compiled its report. And let’s not even get started on Republican leaking during the Benghazi and Hillary email affairs. It’s a wonder Washington DC ever dried up after those House investigations.

As American Enterprise Institute President Robert Doar has pointed out, the Nixon inquiry was a model of bipartisan cooperation. The Democratic chairman of the House Judiciary Committee, Rep. Peter Rodino (N.J.), assembled a unified staff (including Doar’s father, John, a Republican whom Rodino appointed as special counsel). The full House voted on authorizing the inquiry. Etc.

This would be a good point except that what’s changed in the past half century isn’t the partisanship of Democrats but that of Republicans. Faced with overwhelming evidence of presidential malfeasance toward Ukraine, Republicans so far have unanimously refused to give the investigation the time of day. Instead they complain about process; they pass along absurd conspiracy theories on Fox News; and they insist that extorting a foreign country for help with a presidential campaign is a mere peccadillo, not impeachable at all.

In other words, Thiessen is right about the “partisan nature” of the Trump impeachment proceedings, but the partisan nature is almost entirely on the Republican side. There are a dozen Republicans in the SCIF who have heard all the evidence and participated in the questioning. If there were anything in the testimony so far that was favorable to the president, I can pretty much guarantee they’d be leaking it gleefully. If they haven’t, it’s because there’s been nothing but bad news for Trump so far.

Let’s cut the crap. These are preliminary hearings. Republicans are participating. They’re being held in a SCIF because there are potential national security issues involved. The evidence against Trump so far is overwhelming. And yet, Republicans refuse to take it seriously. To paraphrase Thiessen himself, “If the facts are on the Republicans’ side, they have nothing to fear from serious and thorough cooperation.” So far we’ve seen nothing of that.