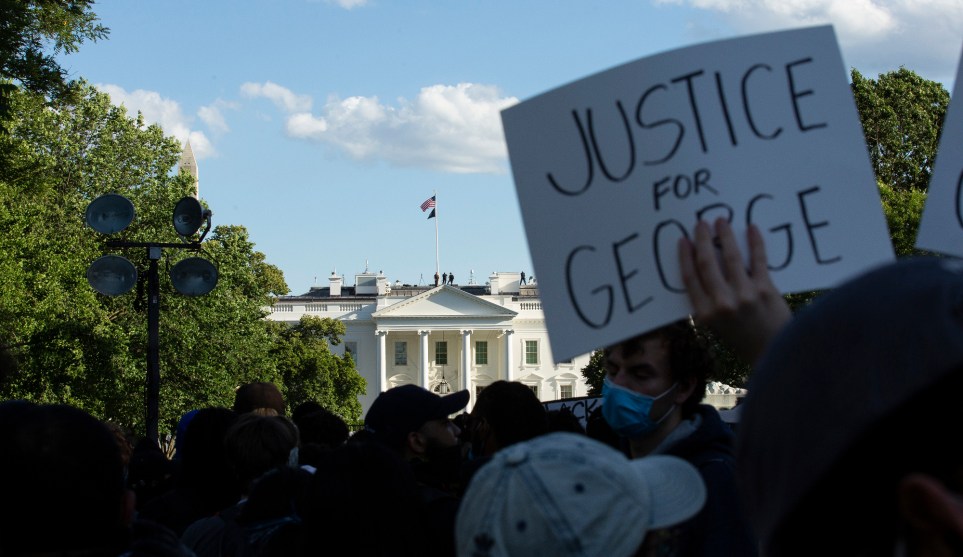 There will be no more of this nonsense where the president might be able to see it. There's now a big iron fence completely surrounding Lafayette Square.Stefani Reynolds/CNP via ZUMA

Oh hey, remember that federal cops forcibly cleared Lafayette Square last night with rubber bullets and tear gas so that President Trump could walk over to St. John’s Episcopal Church for a photo op? It totally didn’t happen that way:

A source says tear gas was never used — instead smoke cannisters were deployed, which don’t have an uncomfortable irritant in them. And, the source says Park Police didn’t know President Trump would be walking across the park several minutes later. Park Police say…

…the reason the crowd was disbursed with smoke cannisters is that at that moment, officers were being pelted with water bottles. Another factor was that protesters had climbed on top of the structure at the north end of Lafayette Square that had been burned the day before.

It’s good to set the record straight. I guess it was just a gigantic coincidence that they happened to clear the park just minutes before Trump headed over to the church. But sometimes life is like that, amirite?

And why did Gen. Mark Milley, chairman of the Joint Chiefs of Staff, accompany Trump dressed in battle fatigues? Ha ha, that’s a funny story:

A senior defense official indicates [Secretary of Defense Mark Esper] and Joint Chiefs Chairman Gen. Milley didn’t plan to accompany Donald Trump on his walk across Lafayette Park for a photo op outside St. John’s Church yesterday. They had left the Pentagon and were en route to the FBI field office to work with the director and AG “to observe and provide leadership.” After they left, the White House requested they redirect there to update Trump.

While they were there, as that meeting concluded, the president indicated an interest in viewing the troops that were outside. And the secretary and chairman went with him to do so. That’s the extent of what was taking place and at that point they were part of the group that was with the president as he continued through LaFayette Park.

So (a) Trump tricked them into coming to the White House, (b) Trump lied to them about viewing “the troops,” and (c) they fell for it and accompanied Trump all the way to the church even though no troops were there to inspect.

Meanwhile, Trump is posing this morning for yet another religiously-themed photo op at the John Paul II shrine despite the fact that the Archbishop of Washington basically told him to go to hell:

I find it baffling and reprehensible that any Catholic facility would allow itself to be so egregiously misused and manipulated in a fashion that violates our religious principles, which call us to defend the rights of all people even those with whom we might disagree. Saint Pope John Paul II was an ardent defender of the rights and dignity of human beings. His legacy bears vivid witness to that truth. He certainly would not condone the use of tear gas and other deterrents to silence, scatter or intimidate them for a photo opportunity in front of a place of worship and peace.

Needless to say, Trump doesn’t care. He went to the shrine, CNN followed along dutifully, and he got his photo op for use in the fall campaign.