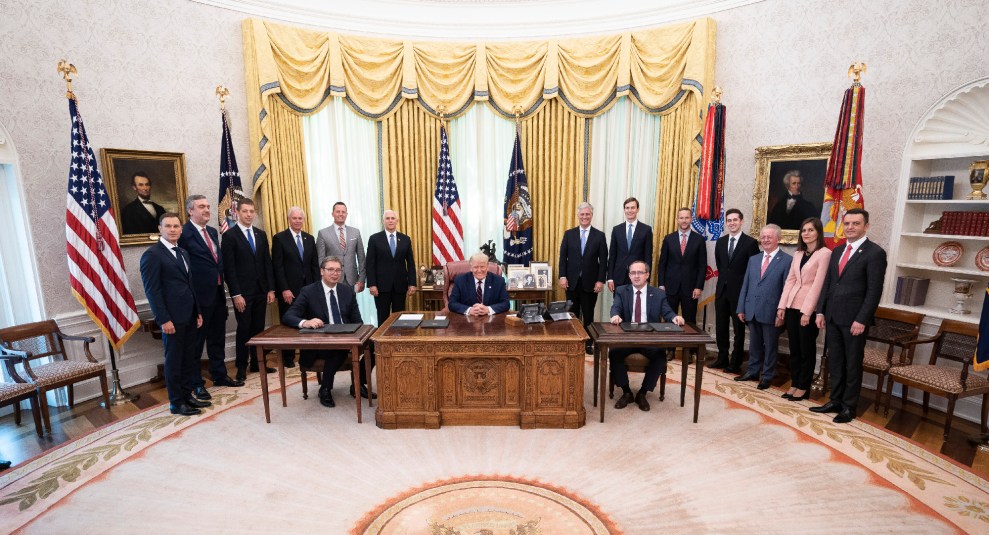 Hey, do you all remember that big Serbia-Kosovo treaty that President Trump bragged about last Friday? No? I don’t blame you. You probably don’t care all that much about Serbia and Kosovo in the first place, and anyway, according to Majda Ruge there was nothing new in it anyway. It was just a laundry list of stuff that both countries had already agreed to long ago.

Still, no harm, no foul, right? Presidents hype things during election years all the time. As long as no harm was done—

For all the supposed high-level political attention brought to this agreement, U.S. Ambassador Richard Grenell couldn’t get the parties to issue a unified statement—raising questions about the legal status of the signed documents and reflecting a degree of sloppiness that comes with prioritizing speed and showiness over content.

…Was it worth it? For this agreement to come about, Grenell helped bring down the reformist Kosovo government of former Prime Minister Albin Kurti, got Donald Trump Jr. to threaten the withdrawal of U.S. troops from Kosovo, and deepened a transatlantic rift that will certainly be exploited by regional politicians. This is amateur-hour diplomacy, and the damage done dwarfs any gains.

That’s peculiar. Even during election season, why bother with such heavy handedness to accomplish next to nothing? I mean, if that’s all there was to it—

The downside…is that both parties risk drifting further away from the EU, as it requires opening an embassy in Jerusalem. Whether Serbia and Kosovo will actually do so is a different issue altogether, but it creates additional problems for both countries when it comes to aligning their foreign policy with the EU.

Finally we get to the bottom of things. The agreement requires both Serbia and Kosovo to open embassies in Jerusalem, which is catnip to Trump’s evangelical base. Maybe you and I don’t care much about Serbia and Kosovo—and maybe evangelicals don’t either—but embassies in Jerusalem is a whole different thing. Even if they never actually happen, they will become a cause célèbre among evangelicals, spread via sermons, church newsletters, Facebook chains, and so forth. It may not be the greatest way of conducting foreign policy, but it’s a great way of running a political campaign.