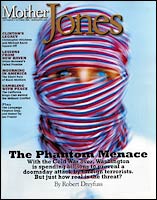 Features
The Phantom Menace
by Robert Dreyfuss
Could terrorists attack the United States with weapons of mass destruction? Highly unlikely, say defense experts. So why is the Clinton administration spending billions to foil a most improbable threat?

Death of a Neighborhood
by Rob Gurwitt
Throughout the nation, cities are preparing for a new wave of urban renewal. Before they call in the bulldozers, officials may want to consider the fate of New Haven’s once-bustling Oak Street district.

Good Bill? Or Bill of Goods?
essays by Christopher Hitchens and by Michael Kazin
Did Bill Clinton make social reform acceptable again — or lock in the Reagan revolution? From the left, two opposing views kick off the legacy debate.

The Silence and the Fury
Photo essay by Paul Fusco; text by Debra Dickerson
In New York City, Women in Mourning and Outrage bring a somber, dignified presence to police brutality protests.

The Bingo Connection
by Christopher D. Cook
Jewish settlements inflaming tensions in the Middle East are financed by an unexpected source — a lucrative bingo club in an impoverished Southern California town.

Unions.com
by Douglas Foster
In Silicon Valley, the moguls of the New Economy may have met their match — union organizer Amy Dean, who is working to forge an alliance between janitors, scientists, and high-tech professionals.

Departments
Backtalk
Readers sound off on Ralph Nader, reuse versus recycling in construction, reparations to families of former slaves, and Terry Gross of National Public Radio.

Outfront
What the EPA doesn’t recall about Dursban; patchy drug tests; white bread for warriors; the Unabomber and Harry Truman; our Top Ten Activist Campuses; and the hellraising Mr. Ruckus.

Power Plays: Beyond Excess
by Paul Taylor
A new era for campaign finance: Outrage is passé, and rules are meant to be broken.

The Commons
by Sue Halpern
The Guerilla Girls’ protest of the male-dominated arts world has brought agitprop to Broadway.

The Slant
by Ian Frazier
The press corps shows its true colors — Crayola.