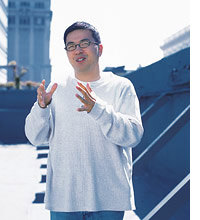 Filmmaker Justin Lin does not have a string of hit movies, an eight-digit studio budget, or even a marquee cast of Hollywood stars. But he does possess something equally powerful: buzz. The Asian American director and his upcoming Better Luck Tomorrow became instant causes célèbres at this year’s Sundance Film Festival when a disgruntled viewer stood up during a Q&A session to complain, “What kind of a portrait is this of Asian Americans? Don’t you have a responsibility to paint a more positive and helpful portrait of your community?” To his defense came none other than Roger Ebert, who stood up in the theater to rebuke the amateur critic, saying, “You would never make a comment like that to a white filmmaker.”

Better Luck Tomorrow (Trailer) takes a familiar media stereotype of Asian high-school students — studious, overachieving, etc. — and turns it inside out, as the film’s teenage scholars pick up cheat sheets, drug dealing, and armed theft to supplement their extracurricular activities. Ebert gave the film a rave review in the Chicago Sun-Times, as did Peter Travers in Rolling Stone. The buzz sparked a multistudio bidding war, from which Lin emerged with MTV Films as his distribution partner.

That experience has turned the 30-year-old Lin into the most prominent American filmmaker of Asian descent since Wayne Wang broke out in the 1980s with Chan Is Missing and Dim Sum. Mother Jones recently spoke to Lin in Los Angeles about his film, his sudden notoriety, and where all of this might lead both Hollywood and Asian American cinema.

Mother Jones: Rumors aside, what exactly went down at Sundance?

Justin Lin: Someone just stood up after a screening. He felt that the portrayal of the Asian characters, in his mind, was amoral and empty. But Roger Ebert stood up and defended the film and said, “This is not an amoral film — this is a film about amorality.” So that, in itself, became a very interesting discussion.

MJ: Did you expect that kind of reaction?

JL: It got to be pretty crazy at Sundance. The whole point of this was to stir things up a bit. This film should open up questions. It shouldn’t be something that you walk out and five minutes later forget about.

MJ: How do you respond to the criticism that the film isn’t portraying so-called positive images of Asian Americans?

JL: I think the whole notion of “positive” needs to be examined. Usually when you see Asian faces on screen, they’re there for an Asian American reason. Either they’re tourists or kung fu masters or whatever. As an Asian American watching film, that’s something I’d like to move away from. But I get the sense that anytime somebody tries to do something different, the Asian American community always looks at the negative aspect.

JL: They’re putting a lot of muscle behind this. They loved the film and the buzz was getting so big at Sundance — there were three different companies vying for it — that within one hour they decided to acquire it. Plus they already signed me up for my next film. It’s amazing — I left for Sundance worrying about my rent. I put everything I had into this film.

MJ: Given that you went from being in massive personal credit-card debt to being offered $40 million movie budgets, how hard is it not to get swept up?

JL: It’s really hard. There’s an anxiety of wanting to please the studios. You want to prove to them that you can do it and sometimes you might jump at a project that you’re not totally passionate about.

MJ: With all these studios recruiting you, is your ethnicity ever an issue?

JL: Not at all. I’m realizing that the only color that matters in the industry is green. For me, that’s actually kind of nice. Now, if Better Luck Tomorrow makes money, they will be open to making another Asian American film on a studio level.

MJ: I heard that you actually had trouble convincing Asian American investors to back the film.

JL: It’s probably one of the most disappointing aspects in trying to make this film. A lot of the Asian American investors that I’ve met, they were the ones asking to change these characters to Caucasian characters.

MJ: A little ironic, isn’t it?

MJ: What’s striking about Better Luck Tomorrow is that it’s not caught up in any “Who am I?” identity politics. The teens in the film might worry about their next heist but not existential questions about what it means to be Asian American.

JL: I was talking to a filmmaker — he made one of the early Asian American films — and he literally thought they were going to go bankrupt. He figured if they were going to do that, they were going to put as many messages as they could into that film. That’s the feeling — when you have the opportunity to speak, you’re eager to get all of your messages across. Hopefully, with this film, there is a maturity to it. People don’t want to sit there to have you explain why you need to exist. You just do, and people have to come along with it.

MJ: Do you think part of the reason the film strikes a chord, especially across ethnic lines, is that it is often more about the oppressive space of suburban life? So much of the film, visually, revolves around the homogeneity of the ‘burbs.

JL: This film, even though everybody’s Asian American, it might as well be Anywhere, USA, and I think that’s the point. Having grown up [in Orange County], it definitely was something that was on my mind. It’s this dichotomy that exists where they want everybody to be happy together as a community, but at the same time, no one talks to each other. I find it very funny that my family worked super-hard and they’ve finally gotten to buy this house inside this gated community, and it’s a fucking Nazi state over there.

MJ: Why address teen angst, violence, etc.? You could say we’re already inundated with these issues in the news media.

JL: It’s something you read about, but people don’t really talk about. And when they do talk about it, it’s never really in inclusive terms. It’s very close to us, yet everyone distances themselves from it. I became a filmmaker because I wanted to deal with issues that intrigued me, that I thought were pertinent, that would start dialogue. If Better Luck Tomorrow was just another film that makes you feel good, you might as well make a studio film.