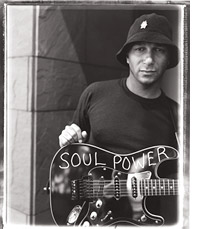 Morello, the former guitarist for the incendiary Rage Against the Machine, now wields his ax for Audioslave, the new band he formed with singer Chris Cornell, the ex-frontman for Soundgarden. The 38-year-old activist became a certifiable guitar god in the ’90s on the strength of albums like Rage Against the Machine, Evil Empire, and The Battle of Los Angeles. Morello seamlessly fused hard rock with influences from hip hop, helping give birth to what’s now known (and sometimes reviled) as rap metal.

Before the band’ s unceremonious dissolution two years ago, Morello (along with lead singer Zack de la Rocha) had been the driving force behind Rage Against the Machine, which is regarded as the most politically radical group ever to sell 10 million albums. Rage jammed to benefit Mexican revolutionaries, staged a protest concert outside the 2000 Democratic National Convention — even got booted off Saturday Night Live for trying to hang an American flag upside down over their speakers. In the aftermath of September 11, the radio conglomerate Clear Channel briefly pulled the band’s entire catalog off its airwaves.

Audioslave promises to be less overtly political, but Morello (the son of a Kenyan revolutionary and Mary Morello, Tipper Gore’s nemesis in the ’80s battles over music censorship) isn’t letting his activism slide. At this summer’s heavy-metal-palooza, Ozzfest, Morello rolled out his latest progressive project, Axis of Justice — a campaign to radicalize America’s head-banging youth. Morello spoke with Mother Jones from Los Angeles.

Tom Morello: I should say I’ve been a fan of Mother Jones magazine, and also Mother Jones, the historical figure. My mom lives in a small town in Illinois, and when you drive across country from Los Angeles you pass Mount Olive, Illinois, where Mother Jones is buried. I always stop and place some flowers on her grave. [Laughs.]

Mother Jones: What effect did your parents have on your becoming an activist?

TM: My dad, he was a member of the Mau Mau uprising in Kenya and fought against British colonial rule, so that story was always in my house when I was growing up. My mom was very involved in the civil rights movement, and for 12 years she headed Parents for Rock and Rap, the anticensorship organization which locked horns with Tipper Gore. Those things were tremendously influential to me. Of course, along the way I got bitten by the guitar bug. I am both blessed and cursed with being a guitar player — that’s my vocation. I don’ t have any choice in the matter. It chose me. But given that, I have tried to find a way throughout my career to twin my interests in music and politics.

MJ: Will Audioslave have the same activist presence as Rage?

TM: Rage Against the Machine had many successes politically. However, one of the lessons I learned from it was that often the band politics got in the way of the band’s politics. The personality disagreements would really hurt the political work that we intended to do. So, in Audioslave, we’ve designed a fire wall between the music and the political action. This way, it feels like I can get my hands as dirty as I want in the political realm without it hurting the band.

MJ: What about Audioslave’ s music?

TM: I think there is a much greater sonic diversity than in the past. There are some of the more predictable influences — Black Sabbath and Led Zeppelin — but we’ve been able to weave in some more esoteric influences like Chemical Brothers and Portishead, and even Woody Guthrie.

MJ: Tell me about Axis of Justice.

TM: A lot of times I used to tell kids, “If there’s not a political organization that suits you, then you should form your own.” Ultimately, I decided to take my own advice. In my view, the true Axis of Evil is pandemic poverty, degradation of the environment, and arms proliferation at great profit around the globe. So along with Serj Tankian from [the band] System of a Down, we decided to plant our own flag and form an Axis of Justice to combat that.

We offer everything from providing first-hand help to kids who are physically or sexually abused to offering kids ways that they — in their community, that day — can hook up with organizations fighting for causes they believe in. Everything from environment, to labor issues, to stopping this international cycle of violence. It’s an organization that’s still finding its footing, but it’s the most exciting political endeavor that I’ve ever been a part of.

MJ: How did the organizers of Ozzfest respond?

TM: They were very agreeable. [Laughs.] All they had to do was give up a tent in the midst of all the popcorn booths and henna paintings. What we provided was the most educationally intense 20-by-20 square feet that has ever gone out on a concert tour. We even had help from the Museum of Tolerance here in L.A. with a hate crimes presentation. The only complaint we had from people was that there wasn’t enough space in the tent. Now, we’re trying to expand this out internationally as well. Wherever the tours go, Axis of Justice will go as well.

MJ: A lot of your fans are teenage kids out in the Midwest who have no idea how to get involved in politics.

TM: There’s no way to plug in. I know that, because I was that kid. When I was 16 or 17 years old, I had these burning political passions, so me and my friends in high school in Libertyville, Illinois, made an underground paper. We tried to find the phone numbers of our congressmen to lobby them about foreign policy in El Salvador. [Laughs.] What we’re endeavoring to do — both with the tour and with axisofjustice.org — is to answer that question “How do I get involved?” I’ve heard that question thousands of times through the last 10 years. If you live in Peoria, Illinois, and are interested in environmental issues, we’ve got your hookup.

MJ: I think a lot of people have preconceived notions about hard rock fans.

TM: There are many fans of hard rock music that have been wrongly pigeonholed as apathetic. The music of Rage Against the Machine and now Audioslave is not music for the elitist coffeehouse culture in SoHo. It’ s rock ‘n’ roll music for kids across the land, and I think that makes it much more subversive in a way, in that it has the form and the function of a powerful, populist music, but it can carry very incendiary messages.

TM: Well, this horrific saber rattling about going to war and killing even more civilians in Iraq in the name of this “War on Terrorism” seems foolhardy to me. It defies reason that somehow we’ll be safer from terrorism if we economically and militarily control countries in the Middle East. So clearly something else is going on. Part of it is a sleight of hand to keep people’s minds off the fact that the economy is going in the toilet, and that corporate crime’s at an all-time high. But also it just seems like a naked power grab for oil-producing countries.

And people are going to pay the price — innocents. One of the lessons of 9/11 — which at least in some quarters has begun to bear some fruit — is that we were able to see the victims of that tragedy as real people. They were us. The key is to have that sentiment transcend borders — to look into other countries, whether Afghanistan or Iraq, as mothers and daughters and husbands and sons as well, and not just allow them to be painted as faceless evil beings by the imposter in the White House. In the ’60s, there were pictures of little girls burned after napalm attacks. Now, all that’s been sanitized. The U.N. estimates that thousands of civilians in Afghanistan were killed. Not Taliban, not Al Qaeda, but just folks. And we haven’t seen a picture of one of ’em!

MJ: Speaking of war, if you were somehow called on to fight, would you go?

TM: Absolutely not. Which is not to say there is no circumstance where I would take to the street to do battle, but it’s more likely to be on Sunset Boulevard than the deserts of Iraq.