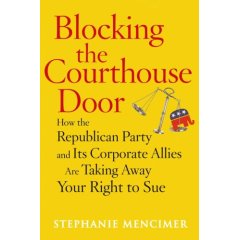 Stop me if you’ve heard this one before: A woman burns her lap with a cup of McDonald’s coffee and sues the fast-food chain to the tune of $3 million. There’s a good reason why you know this story, thanks to a decade-long campaign by Republicans, tobacco companies, and the insurance industry to awaken Americans to the dangers of “lawsuit abuse” and out-of-control juries. Here’s what you don’t know: As Stephanie Mencimer points out in this blistering book, the burned woman, Stella Liebeck, was not some yuppie rushing to work; she was a conservative 79-year-old retired department store clerk. At the time of her 1992 accident, McDonald’s had received more than 700 complaints about its coffee being too hot—including several from Cincinnati’s burn center. Liebeck’s award was reduced to $480,000, and she eventually settled for much less than $3 million. But her case had already become one of the causes célèbres of the tort reform movement.

From Texas, Mencimer follows the Republicans as they reshape the law to protect corporations from citizens’ right to a trial by jury. In terms of our democracy, the stakes could not be higher. For example, without uniform health care, the courts are the first and last resort for patients seeking redress for botched medical procedures. Malpractice cases are not simply about money. Suing a hospital is often the only way to find out what really happened. As Mencimer points out, a lot of malpractice cases are dropped once the facts are discovered in the legal process; big settlements are rare but inevitably make headlines. She convincingly corrects many other misperceptions about ambulance-chasing lawyers, “jackpot” juries, and the notion that frivolous lawsuits have made our lives more expensive. But everyone hates a lawyer—until they need one.