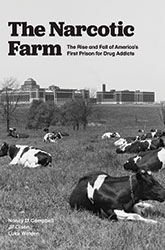 
Unfortunately for the screenwriters in Judd Apatow’s shop, the United States Narcotic Farm was not a place where the government grew pot and poppies. Rather, it was a joint venture of the United States Public Health Service and the Bureau of Prisons, a huge, vaguely art-deco building near Lexington, Kentucky, where, from 1935 to 1975, convicted drug addicts could get a new deal: Serve out your time on this 1,000-acre spread, the feds promised, and we will set you free from your jones and not treat you like dirt. Soon, addicts were asking judges to send them away for the six-month cure at “Narco.” Notable inmates included William S. Burroughs and Sonny Rollins.

The Narcotic Farm shows how Narco was instrumental in convincing the American public that addicts needed doctors more than they needed jailers. But it was the early days of the medical model: Narco graduates had a 93 percent relapse rate, and for decades patients were used as guinea pigs for drugs like methadone and lsd (the latter under the hidden auspices of the cia).

Its text interspersed with hundreds of photographs, the book keeps one eye on the details of daily life—haircuts and manicures, farmwork, golf, and music—and another on the befuddlements of American drug policy embodied by the farm. The farm’s doctors had a more humane approach to human weakness than cops did, but both shared the flawed assumption that allows the war on drugs to continue: that America can be drug free. (A companion documentary airs on pbs in November.)

Correction: An earlier version of this review listed Billie Holiday as a Narcotic Farm inmate, as per the publisher’s press release. Mother Jones regrets the error.