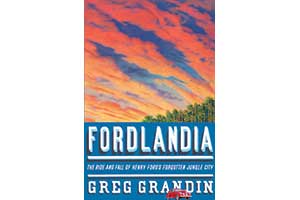 In 1927, Henry Ford was the richest man in the world—so when he needed cheap rubber, he simply bought a Brazilian rainforest and set about turning his little corner of the Amazon into a model American town. In this lively history, Greg Grandin enlists a cast of union-busting thugs, a Norwegian sea captain, and a cranky botanist to tell the story of the short-lived Fordlandia plantation.

More than just a company town, Fordlandia was an ambitious feat of sociological engineering. Indigenous workers lived in cozy cottages straight out of the Midwest and Swiss-style bungalows. Alcohol was forbidden; instead the company provided wholesome fun in the form of square dances, swimming pools, a golf course, movies, and recreational driving in company cars. Though Ford paid his workers more than they would have earned harvesting rubber elsewhere and provided free health care and education, he wasn’t motivated by altruism alone: Happy laborers, he reasoned, would be more efficient.

In the end, caterpillars and blight took hold, the rubber trees refused to thrive, and by 1945, the experiment had completely collapsed. And so died Ford’s utopian vision of profit-driven paternalism—a sentimental notion unrecognizable in an era of multinationals, slums, and sweatshops.