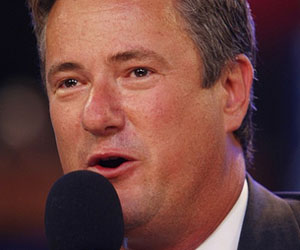 Photo used under a Creative Commons license by flickr user <a href="http://www.flickr.com/photos/7305404@N06/">Learfield News</a>

This story first appeared on the Women’s Media Center website.

The folks over at Fox News have taken to demonizing their MSNBC counterparts, accusing them of being radical tools of the far-left. But MSNBC’s morning program is dominated by one of their own ideological brethren, Joe Scarborough. While the Scarborough of “Morning Joe” has painted a moderate sheen over his (admittedly affable at times) personality, his previous attachment to the more extreme wing of the anti-choice movement combined with a pattern of sexist behavior on television should be the cause of concern for women viewers.

Several times at the beginning of the week of the murder of Dr. George Tiller, MSNBC host Rachel Maddow went into some detail about the long and storied history of the violent anti-choice fringe, beginning with the murder of Dr. David Gunn in Pensacola. What she did not mention was that her colleague Scarborough was initially the pro-bono lawyer for Gunn’s accused and later convicted killer, Michael Griffin. Scarborough, who at the time was about to run for Congress, where he served just under four terms, left the case after three months, leaving only after a final meeting with Griffin and Bob Kerrigan, who became the acting defense attorney on the case.

Village Voice investigative reporter Wayne Barrett wrote a blog post this week reminding readers of this connection, which he teased out in a 2008 cover story focusing on Scarborough’s image makeover. According to Barrett’s story, Scarborough brushes the episode aside as a “favor” because his then father-in-law and Griffin’s father were friends. Griffin, however, has a different story. Says Barrett:

Griffin handwrote the Voice two long letters last year after we contacted him in prison, describing in depth his relationship with Scarborough. While Scarborough tried to minimize his ties in an interview, claiming he was merely doing “a favor for a friend” and briefly searching for a lawyer who’d take the case to trial, Griffin detailed Scarborough’s efforts to stay on the case and work with the trail attorney. The court record itself shows that Scarborough told the judge he was prepared to try the case, and that he represented Griffin for nearly three months. Scarborough claimed that his then father-in-law was a friend of Griffin’s father and that’s why he did it, but neither would get on the phone and confirm that (not that it’s much of an explanation.) Griffin’s father contributed twice to Scarborough’s campaign—$200 apiece.

Scarborough’s championing of the anti-choice cause appears to have helped vault him into Congress. Barrett reports that the leading donors to Scarborough’s campaign were from “pro-life” groups, and even more disturbingly, he voted against clinic worker protection measures when he arrived in the House, even though he had seen the violent result of an attack on a clinic worker.

Scarborough’s ties, and even his votes, from a decade ago should not render him guilty by association—particularly since he’s said so little one way or another about the matter. But Scarborough should own up to these episodes from his past for the sake of journalistic transparency. The host has effectively softened his touch and, as Barrett reports, has adjusted his hard-line conservative image by doing some good works, like getting his hometown to name a street after Dr. Martin Luther King, Jr. He could do the same on this issue. But instead, bloggers report that he remained relatively silent on the Tiller murder, even as the headlines screamed across the bottom of the screen. Political blogger Taylor Marsh notes:

This in the same week “Morning Joe” relegated Dr. Tiller’s murder to quiet murmurs of “horrifying” and one mention in the “Morning Grind,” plus the crawl as a reminder of the carnage. But did they discuss it? Nah. After all, you wouldn’t want to put people off their Starbucks.

Barrett followed up with another post yesterday saying that Scarborough had yet to address the issue or his connection to it on three consecutive mornings. Whether Scarborough didn’t want to bring up the Tiller murder simply because it made him uncomfortable, or because he did not want his past involvement to come to light, or for another reason entirely, the omission suggests a conscious editorial decision to neglect a front-page story to which his own colleagues were devoting copious screen time.  He could have chosen to acknowledge his past as an anti-choice politician with ties to extremists, and then opened up a discussion on the crime.

There is one more piece to the Scarborough puzzle, which may suggest why he’s not eagerly talking about the abortion issue: his attitude towards women. Scarborough’s demeanor and attitude towards his female colleagues and women in the public eye has perhaps been dwarfed by a litany of complaints about fellow MSNBC pundit and host Chris Matthews. However, there have been plenty of documented moments of Scarborough displaying condescending, bullying, or objectifying attitudes towards women. For example, he asked whether Presidential candidate Fred Thompson’s wife “works the pole” a presumed reference towards stripping. He was a proponent of the obnoxious “Hillary cackle” theory. He once got so upset in a sparring match with Maddow that he ripped off his mike in disgust, although he’s been able to argue with his male colleagues without such a display. And he once threatened his co-host, Mika Brzezinski, with “backhanding.”

As for his influence, Scarborough is the host of three full hours of television—considerably more than Maddow. It should be in his interest, the public interest, and women’s interest for him to come clean on his anti-choice connections, past and present, so there can be a vigorous and fair discussion of women’s issues, including abortion-related ones, on his program. And hopefully if he ever hosts such a discussion, he will have the decency to stop himself from shouting down or marginalizing his female guests. Is that too much to ask?

Sarah Seltzer is a freelance writer based in New York City. She writes regularly about gender and pop culture for RH Reality Check, and has been published in Bitch, Venus Zine, and Publishers Weekly.