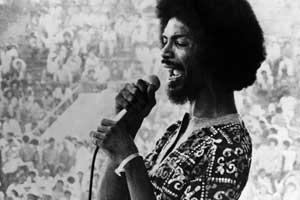 EDITOR’S NOTE: Gil Scott-Heron died on Friday at a hospital in Manhattan. He was 62.

The revolution will not go better with Coke

The revolution will not fight the germs that cause bad breath

The revolution will put you in the driver’s seat

The revolution will not be televised

IT’S CHRISTMAS EVE, almost 40 long years after he wrote these immortal lyrics, and it’s a workday for Gil Scott-Heron. On this bright, bone-chilling afternoon, the pioneering urban poet and musician is holed up in his humble East Harlem office, hunched over an ancient, floppy-disk-driven word processor. An episode of Gunsmoke plays on the TV. Scott-Heron moves a bit slow, but he’s racing to meet a self-imposed deadline of New Year’s Day to complete a rewrite of The Last Holiday, the 600-plus-page memoir of his 1980 tour with Stevie Wonder that campaigned for—and ultimately helped secure—the creation of Martin Luther King Day.

The curtains are drawn in the ground-floor apartment; a few days’ worth of newspapers are scattered across the floor. Posters from some recent gigs in Europe are taped haphazardly to the walls. It’s this modest setting from which Scott-Heron, 60, is launching I’m New Here, his first new album in 16 years. Returning after such a long hiatus doesn’t seem to faze him. “Every one of my records is new if you ain’t heard it,” he says, leaning back on the ratty, yellowish couch, “so I got a lot of new music out there.”

At this point, Scott-Heron’s work is familiar only to those with long memories or extensive record collections. In the ’70s and ’80s, though, his groundbreaking blend of insightful spoken-word meditations and music in such songs as “Home Is Where the Hatred Is” and “Whitey on the Moon” (“A rat done bit my sister Nell / With whitey on the moon”) was a crucial element in the development of hip-hop. Public Enemy’s Chuck D once said that “rhythmic message music started with him,” and in a recent blog post Kanye West wrote that he’s taking the inspiration for his new songs from Scott-Heron, whom he called a “true poet” who “documented what was happening in culture.”

Perhaps most memorably, Scott-Heron contributed a phrase to the general vernacular with his 1970 poem “The Revolution Will Not Be Televised.” Rage Against the Machine guitarist Tom Morello recalls that when he first heard the song, “the title alone gave me a different understanding of the world—that everything is not brought to you by existing cultural channels, and you’re going to miss it if you’re sitting on your couch.”

Born in Chicago, the son of a professional soccer player (his father, known as the “Black Arrow,” was the first black member of Celtic, a team in Glasgow, Scotland), Scott-Heron was raised in Tennessee. After moving to the Bronx with his mother, he was given a full scholarship to the elite Fieldston School. At Pennsylvania’s Lincoln University, he started a band, Black and Blue, with his longtime collaborator, keyboardist Brian Jackson. He dropped out of college after a year, published two novels, and began his recording career in 1970. His early, and perhaps best remembered, works were spoken-word pieces. But in 1975, Scott-Heron became the first artist signed to legendary record executive Clive Davis’ Arista Records label, which took him in a more musical direction. He appeared on Saturday Night Live—at Richard Pryor’s insistence—and alongside Bruce Springsteen, Tom Petty, and James Taylor at the Musicians United for Safe Energy “No Nukes” concerts.

But since 1982, Scott-Heron has only released one album of new material. He has spent much of the last decade in and out of jail on drug possession charges; at one point, an ex-girlfriend appealed directly to a judge to send him to rehab, saying he had a $2,000-a-week cocaine habit and that she feared for his life.

He is guarded, but not apologetic, about this chapter in his story—a painfully ironic twist for the man behind “The Bottle,” “Angel Dust,” and other fervent anti-drug songs. “I should have done 30 days or community service, but I got my charge adjusted like I was some special person,” he says, adjusting the cap on his gray hair. “I lost a lot of momentum when I was carrying it and trying to take care of business. Justice is bought and sold down at the lunch tables when the DAs and public defenders make deals over who they’re gonna send to jail and who gets to go home. I always believe there will be more deals made than justice done.”

Richard Russell of England’s superhip XL Recordings (home of Radiohead, M.I.A., and Vampire Weekend) first visited Scott-Heron at Rikers Island in 2006, and began the lengthy and hard-fought process that led to the recording of I’m New Here. The album sounds markedly different from the jazz-inflected work of Scott-Heron’s classic period. It’s sparser, more purely rhythm based. And instead of reviving what he’s best known for—a scathing critique of America’s racial attitudes and social policies—it concentrates on family and more personal concerns. “What better place to go when really frightening things surround you?” he says. I’m New Here also contains a harrowing version of Robert Johnson’s “Me and the Devil,” which may seem an odd choice for this urbane voice of protest. He says that the fit was a natural—and hearing Scott-Heron cry out “Me and the devil / Was walking side by side” certainly serves as a stark reminder of his own demons.

“I’m a bluesician, a bluesologist,” he says. “I was raised up down in Memphis and was part of that lifestyle because that’s how you live down there. We were all poor, but nobody knew how poor they were because everybody was doing the same. I had no idea how poor I was until I had to compare myself to other people who took that more seriously—and up here they take it much more seriously.”

Rappers from KRS-One to Mos Def have followed in the path he blazed—he’s even been called the godfather of rap—but he has sometimes been quoted sounding critical of the genre. Today, he emphasizes that it’s too early to judge these artists’ true accomplishments. “They’re kids, man,” he says. “Let ’em be, as long as you can. I didn’t want anybody asking what my ultimate anything was when I was 19, 20 years old—I was ultimately just trying to make the next one.”

Nor is he frustrated by the endless uses and misuses of his most famous axiom. “The Revolution Will Not Be Televised” has been adapted, adopted, celebrated, cannibalized, and co-opted by everyone from Elvis Costello to Prince. The Wu-Tang Clan rapped that “the revolution should be televised,” and the song was even reworked into a hip-hop all-star Nike commercial in the mid-’90s. (Since the song was rewritten by KRS-One, Scott-Heron wasn’t entitled to a full royalty check.) “They use it literally, and I was talking about changing your mind about how you look at things,” he says. “No bother. A phrase doesn’t die when somebody misinterprets it—it just sits there where it was for the next person to come along and get it right. As many got it right as got it wrong. So you broke even—that’s the best way to leave a casino.”

Over the course of a conversation, Scott-Heron’s humor comes through far stronger than any sense of bitterness. He makes corny jokes (“We lived next door to this funeral home, and people were dying to get in there”) and veers off into digressions about the history of jazz or the pleasures of listening to radio broadcaster Vin Scully call a Los Angeles Dodgers game. But he has lost none of the incisive, pragmatic sense of outrage that fueled his greatest work. He dismisses the word “militant,” so often attached to his words and actions. “All men are supposed to be created equal,” he says. “Well, let’s have that! I paid for this with tax money. I’m going back like you go to Macy’s the day after Christmas—’You didn’t bring me the right shit!'”

Scott-Heron hopes that the release of I’m New Here will draw some attention to his considerable back catalog (which he owns) and the forthcoming book. But it’s hard to know whether a challenging, genre-defying project can find an audience now in the ways that his music was able to a generation ago.

Regardless of an uncertain future and a difficult past, Scott-Heron says that he is at peace with his legacy. “I don’t regret having done what I did, or the way I did it,” he says. “I know if I would have shut up about a couple of things, I could have probably made a little bit more money, but I wouldn’t have made no more sense than I did. And I wouldn’t be able to say to my kids, ‘Yeah, I stood up for that.’ You had a choice—stand up or lay down. And I didn’t lay down, so I’m all right.”