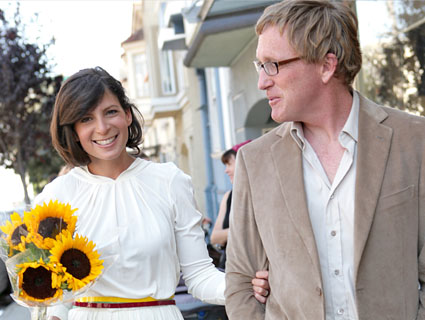 Elizabeth Weil isn’t a marriage therapist, a sex therapist, or a marriage educator, though she talked to plenty of all three in preparation for her book No Cheating, No Dying. She’s just a woman who was willing to put pressure on an already sound relationship in hopes of revealing some deeper truths about love and matrimony. Though the particular contours of her marriage are unique–her husband Dan’s penchant for sawing open pig’s heads to make stock, for example, or her dislike of French kissing–ultimately the issues she tackled are ones that all couples face. Who gets to decide where to settle? How do you handle tension with the in-laws? Why do you keep having the same argument in an endless loop?

Weil’s honesty and willingness to invite readers to peek into the difficulties of her union brought her 2009 New York Times Magazine cover story, “Married (Happily) With Issues,” the prequel to this book, four million page views (and counting). Mother Jones sat down with Weil in a cafe near her San Francisco home to talk about experimental counseling, quibbling over cereal, and making intimate details public.

Mother Jones: Of all the crazy experiments, viewpoints, and exercises you subjected your marriage to, like one workshop where the goal was to pretend your spouse was your father, which do you continue to incorporate into your life?

Elizabeth Weil: Marriage education. It was the thing that Dan and I were most reluctant to do mostly, because it sounded like driver’s ed. It is not intellectually glamorous. It is not fun and sexy. There are these very general programs and you get these booklets about “communication skills.”

We wound up doing these really goofy exercises that are really about empathy. And I wound up thinking about them all the time. They’re just these little conversation tricks or habits of the mind that I think about most days.

One thing they told us in the marriage education class is that if you exaggerate, you lose the goodwill of the person you’re talking to. They start to disbelieve you. And now that I have that in my mind, I’ll notice how prone I am to want to exaggerate, how prone Dan is to exaggerate, even with small inconsequential things. And I’ll notice the effect they have on the conversation.

MJ: How has your idea of what you love about Dan changed?

At the end of the day it is you and your partner. And you just have to create a good life for the two of you. Sometimes we saw outside wisdom that wasn’t positive for us. It was us trying to conform to someone else’s idea of what our marriage should be like.

MJ: That reminds me of what Dan Savage often says, about how non-monogamy is okay, even though it’s not socially acceptable, as long as it’s an arrangement that both parties are comfortable with.

EW: There’s so much debate about who should be married. Those discussions are incredibly important politically, but we live it on the opposite end of the spectrum. We live it in the most privately personal way possible.

Giving gays marriage doesn’t impact any specific couple’s marriage one tiny bit. That is something between the two of you. The more I looked into it, the more intensely I came to feel that way.

MJ: You really pull back the intimate details of your marriage in this book. Is there anything that you were particularly embarrassed about?

EW: You can’t write about marriage without writing about sex. It’s not embarrassing to me with strangers and I’m also not embarrassed with Dan. But it’s embarrassing with my sister and the other parents at the school my children go to. But if the book was going to resonate from readers, I couldn’t shy away from it.

One thing Dan and I have been joking about—he doesn’t think we should have any processed foods in our house. So there is not a box of cereal in our house. And he falls asleep whenever we watch a movie. He found the idea that I would write a sequel called “No cereal, No movies” so much more embarrassing, because he felt they were the kind of things people wouldn’t relate to. Most people don’t relate to, “No cereal.”

MJ: What advice would you have to the unmarried/divorced?

EW: My main advice is don’t wait until something feels really bad to try to make it feel better. It’s much easier to fix a problem when you’re doing great and you haven’t hurt each other by being angry and you haven’t become estranged. Do I wish we didn’t do it? No. Do I think everybody should go do this? Also, no. But I do think the attitude of “not waiting until it’s broken to fix it” is really positive in marriage.

MJ: What do you think makes people so interested in the story of your marriage?

EW: We have a very typical marriage. And I think people were really interested in it because as a culture we’re very private about marriage. We don’t know very much about other people’s marriages. We know so many more difficulties people are having with their children or parents or work lives. You tell people you’re going to couple’s counseling and people think, oh, they’re going to divorce. So there’s something cathartic to have people read a detailed personal account of a marriage. We need stories because they help us think about our own lives.