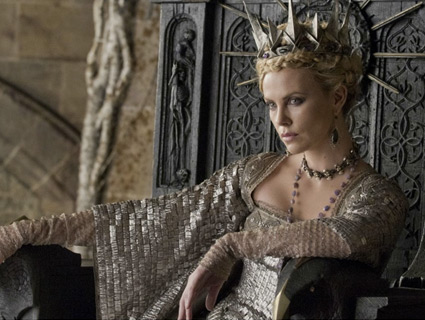 If you’re in the mood to see Thor and a teenage fang-banger team up with wily, axe-wielding dwarves in an effort to overthrow Æon Flux (a.k.a., Mr. F from Arrested Development), then this movie is practically crying out to your cinematic sensibilities. Otherwise, you should consider passing.

Snow White and the Huntsman—the latest non-Julia-Roberts-career-killing adaptation of the Brothers Grimm fable—starts off the way most old-fangled yarns from the 19th century do: blood-soaked usurpation.

Snow White’s dad—newly minted widower King Magnus—meets Ravenna (played by an electric Charlize Theron). The king is so spellbound by her unparalleled bustiness that he forgets all about his dead wife and marries Ravenna literally within 24 hours of meeting her. Alas, the king’s horniness backfires: Ravenna Basic Instincts him on their wedding night, initiates a hostile takeover of the fiefdom, and indefinitely detains Snow White. The new queen deploys medieval storm troopers all across the kingdom’s districts, and begins repressing and mutilating minority populations. She also makes preserving her hotness the No. 1 political priority of the nation, wretched masses be damned.

Flash forward a few years into Ravenna’s reign: Poverty and disease are rampant, hope is moribund, and Ravenna’s goons keep on keepin’ on with the extrajudicial killing. On the bright side, though, Snow White (played by K. Stew) is all grown up and ready to mount a campaign of insurgency. She breaks out of jail and bolts into the unforgiving wilderness, thus prompting Ravenna to send Eric the Huntsman (no relation) to track her down. Eric (played by Chris Hemsworth—naturally) soon finds out that she’s the daughter of the dead beloved monarch and joins her in fomenting the glorious coup. He also coaches her on how to most effectively murder things:

“Look into their eyes, and do not pull it out until you see their soul,” Eric advises while teaching her how to stab regime troops with sharp objects.

When you hear that line, you immediately think that shit is about to get real. And shit does indeed get real—for roughly four minutes. The final battle scene when Snow White goes mano-a-mano with Queen Ravenna is a tightly executed, exciting showdown. Other than that, the crucial set pieces drag like a spout of narcolepsy.

The same could be said for the rest of the movie.

The film’s intentions are certainly appreciated: It’s always worthwhile to try to resuscitate a fairy tale using grit and gloom. And the film couldn’t be clearer about its feminist edge if it starred Maggie Gyllenhaal as a socialist. Whether Snow White is scaring off a Wrath of the Titans-esque creature with the power of yelling, or riding into battle on a noble white steed, it’s obvious that this young woman requires a wheelbarrow to cart around her humongous balls. But it’s tough to fully absorb the message when its obscured by so much limp action and even limper storytelling.

The epic battles—swords, arrows, balls of fire, chain mail, etc.—generally have all the choreography and pow of Final Fantasy gameplay—a disappointment from skilled commercial whiz and first-time feature director Ruper Sanders. The visceral shortfall, however, takes a back seat to the by-the-numbers dialogue, flat tone, and paper-thin characters. Just when you think the film is building up Ravenna as a tragic figure and sympathetic arch-villain, the issue gets dropped as if character development were a grave nuissance. The rugged contingent of pro-Snow White dwarves (played by misused talents including Bob Hoskins, Ian McShane, Ray Winstone, and Toby Jones) are way more irritating than charming. And Ravenna’s sycophantic brother Finn (Sam Spruell)—whose haircut and pigmentation make him look like an Aryan Toadette—is a one-man crash course in disposable, flavorless supporting roles.

The lackluster characterization and development strangle the suspense and anticipation out of the main narrative thrust. So by the time the movie gets around to hinting at a fierce love triangle involving Snow White, her childhood crush, and the Huntsman, there’s little to no reason to care about that tension coming to full bloom in the inevitable sequel.

There is one upside: the performances—particularly Theron’s convincing, icy portrayal of lunatic vanity—are all-around solid. And the film also serves as a helpful reminder to those who keep forgetting that (when she’s not saddled to the Twilight saga) Kristen Stewart is an impressive young actress. In The Runaways, Into the Wild, Adventureland, and now this clunker, Stewart has proven herself to be a commanding lead and an adept physical performer who can easily outstrip the reputation of a dud franchise.

Let’s hope she does the same with this one.

Snow White and the Huntsman gets a wide release on Friday, June 1. The film is rated PG-13 for intense sequences of violence and action, and brief sensuality. Click here to get local showtimes and tickets.