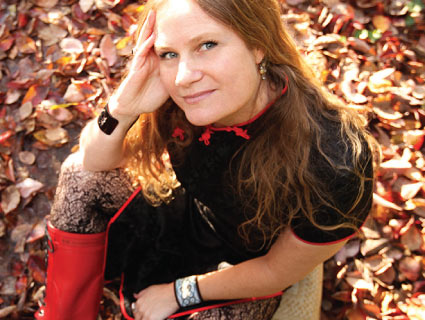 It might seem a bit out of character for Lidia Yuknavitch to find inspiration in a kiddie cartoon. Best known for her 2011 memoir, The Chronology of Water, the 49-year-old author and English professor is revered for her raw, revelatory approach to tough themes—sex, desire, addiction, and abuse. She’s been featured in sex writing anthologies, kicked it with badass writers (Ken Kesey, Kathy Acker, and Cheryl Strayed, to name a few) and even pole-danced (recreationally). Yet some years ago, while watching Nickelodeon’s Dora the Explorer with her toddler, it was in this innocent, animated character that Yuknavitch found the key to a book idea she’d been incubating for decades.

Back in college, Yuknavitch and her classmates were asked to read Sigmund Freud’s 1905 case study of “Dora.” The report follows an 18-year-old girl in 19th century Vienna. She’s romantically inclined towards both men and women. She’s been fending off sexual advances from a family friend for years—and manifests the trauma through spates of muteness and coughing fits. The famed shrink deems Dora “neurotic” and “hysterical.” “It just blew my mind that not everyone in the room was filled with rage reading this,” Yuknavitch remembers. The advent of cartoon Dora, who is Latina, “was total destiny!” she adds. “She was both a really popular cartoon in mainstream America—and an outsider figure at the same time.” In other words—a Dora whose differences don’t make her any less socially acceptable.

Ida, the 17-year-old heroine of Yuknavitch’s new novel, Dora: A Headcase (out yesterday), is based on Freud’s Dora. When Ida’s father sends her off to therapy with Dr. Freud (“Siggy,” or “the Sig,” in Ida-speak), she brings along a vinyl Dora the Explorer purse she’s had since childhood but has remade to match her loud, raunchy adolescence: Dora now has safety pin eyes, a blow-up doll’s blood-red lips, and a tiny gun—and her blue monkey sidekick is “a death skeleton.” Inside the purse, Ida keeps a Zoom H4N audio recorder, which she uses to tape everything—her therapy sessions, restaurant rendezvous, everyday sounds—for later tinkering on her gadgets. And gadgets she has many, and she introduces each one with an obsessively detailed explanation of its function.

The tricked-out purse is just one of Ida’s rebel antics: There’s the time she strips naked in the middle of Nordstrom (she calls it “Nordfucks”); her snarky pushback to Siggy’s diagnoses (“You really do have the synaptic wizardry, Herr Doktor, that’s for damn sure.”); or the time she gleefully shaves her head with her dad’s razor. She’s at war with the conventional girl script—not unlike Yuknavitch herself.

“I want to create new girl myths,” she says of Dora. “Instead of always talking about how women struggle in the face of certain models, what if we spent more energy highlighting all these great other possible girl-paths, and turned away from the dominant culture?”

It’s not just alt-girlhood that Yuknavitch is defending: Ida’s dearest friends are a black trans woman, a bulimic girl, a wheelchair-bound teen, a Native American rape victim, and a gay boy named Little Teena—a marginalized crew intended to critique how society deals with difference. “We point at someone and say ‘sick’ and point at another person and say ‘healthy’ in ways that are hypocritical and disgusting to me,” Yuknavitch told me. “I am trying to attack that.”

Some reviewers are calling Dora: a Headcase the female Fight Club, maybe because both tales take on alternative therapies and multiple identities. Or maybe it’s simply because Yuknavitch’s pal, Fight Club author Chuck Palahniuk, wrote the intro. Even so, she worries about the book’s reception: “Girl anger is really easily misinterpreted,” she says, “but I’d rather there be a novel out there with a girl voice like this, and have the book bomb, than to not write that kind of voice and act like it shouldn’t be in literature.”