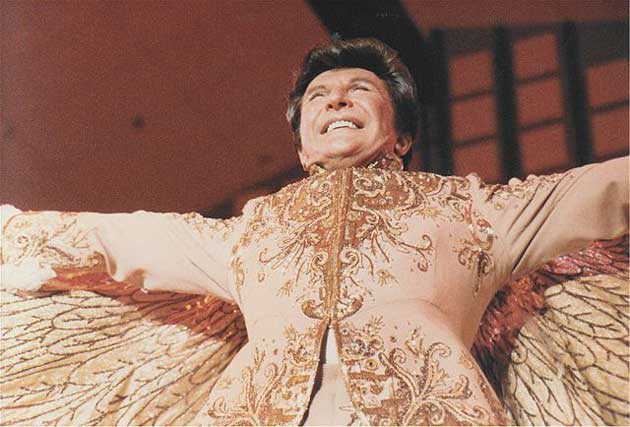 When I met Liberace in 1986, I tried to eat his diamond rings. He was making an appearance at Caldors in Riverside, Connecticut, promoting a coffee table book of photos of one of his fantastic homes. My mom tells me he held me in his famously bejeweled hands and we exchanged grins. I was two.

“He was an absolute sweetheart,” Mom recalled the other day. “Beautiful in his ermine sweater. Big dimples, big diamonds.”

I don’t remember the encounter, but as an “older millennial” I have an awareness of who Liberace was: a flamboyant pianist with a taste for furs and jewels who was the butt of many a terrible late-show joke. Wladziu (Lee) Liberace was a child prodigy born of humble Midwestern roots who gained fame by combining exceptional musical talent with personal charm and a flair for showmanship.

He went on to host his own TV program (The Liberace Show) in the 1950s, made countless appearances in film and television through the ’60s and ’70s, and still packed houses coast-to-coast during the ’80s. While he was one of the most popular and highest-paid entertainers in the world, most young people today don’t really know who Mr. Showmanship was—they were either babies or not yet born when he died of AIDS in 1987.

Tonight, Liberace reenters the pop-culture mainstream via Steven Soderbergh’s HBO biopic, Behind the Candelabra. With Michael Douglas as Liberace, and Matt Damon as Scott Thorson, the spurned lover who wrote the book the film is based on, the movie explores the fabulous lifestyle and tumultuous relationship of the older entertainer and his blonde and becoming young boyfriend.

Liberace once sued a newspaper for implying that he was gay—and won.

Liberace, who was raised Catholic, never publicly admitted that he was gay. In fact, he won a libel lawsuit against an English newspaper for a column implying as much—famously telling reporters that he “cried all the way to the bank.” But as Liberace is reintroduced to a country whose majority now favors gay marriage, and where coming out has been transformed from taboo to typical, it’s interesting to think of how he who begat Elton John, Madonna, and Lady Gaga might have lived his life today. One thing’s for certain, he’d still be a star.

In any case, here are some of the most fabulous recollections of this would-be YouTube sensation, with an imagining of what he might do in similar circumstances today.

Liberace house-trains the Incredible Hulk: In 1980, during an appearance on the Mike Douglas Show, he joined the Incredible Hulk Lou Ferrigno onstage and dressed him in fine linens and sequins before giving him a piano lesson. A master of the modern musical, Joss Whedon most definitely would have found a role for him alongside Mark Ruffalo’s hunky hulk in The Avengers.

Liberace’s fashion sense: He may have remained in the closet, but it was a fabulous closet. The original King of Bling would have given Beyoncé (and Lady Gaga for that matter) a run for her money with his wild getups, which incorporated capes and jewels, feathers and furs.

Liberace meets the Muppets: In 1978, Liberace stopped by The Muppet Show where he goofed around with Kermit and crew, singing and dancing and having a silly good time. Though made for children, the Muppets were often subversive, introducing characters and plot lines that promote positive social change and taking stands against bigotry. In 2002, the South African version of the show introduced an HIV-positive character that probably would have made a good foil to the music man.

Liberace appears on Oprah Winfrey: Frail, but still burning bright, only weeks before his death, Liberace made his final public appearance on The Oprah Winfrey Show on Christmas Day in 1986. He played a medley of holiday songs, which Oprah has called “the most beautiful I’ve ever heard.” With his wit and warmth, Liberace would undoubtedly have been a regular on the TV talk circuit.

Behind the Candelabra debuts Sunday, May 26 at 9 p.m. on HBO.