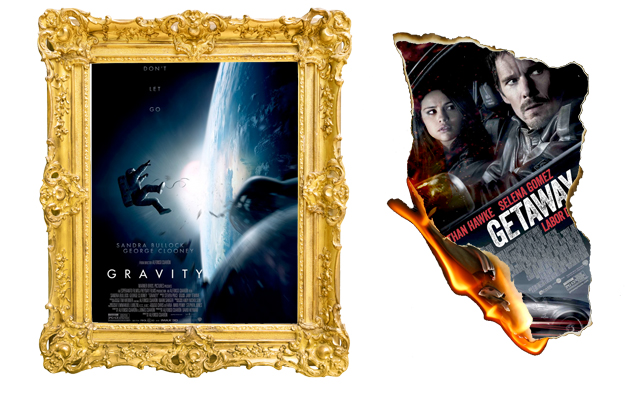 I have long believed that film criticism is a pointless, wildly unnecessary profession. The longer your review of a movie, the truer this becomes.

For instance, my favorite movie (and therefore what I considered the “best”) of 2010 was the gore-sodden and sleazy Piranha 3D. This is a fact I disclose in my Mother Jones bio. I’m going to go out on a limb and say that your tastes are vastly different from mine, and that Piranha (3D or otherwise) was not your favorite film of any year. So why do you care what I think about the movies? Why do you care what any critic thinks of anything, anywhere, ever? You’re right. You shouldn’t. It’s a scam profession.

Having said that, here is my list of the greatest, most wonderful films of 2013. For good measure, I’ve also included my annual “worst of” ranking. Do with it what you will. (Here are my lists from last year, by the way.)

1. The Wolf of Wall Street  (Directed by Martin Scorsese)

On Wednesday, Martin Scorsese and Leonardo DiCaprio flew to Washington, DC, to hand-deliver a screener of their new film The Wolf of Wall Street to President Obama—meaning the legendary director and his star personally gifted the president a DVD that is filled with boobs and quaaludes.

Due to an embargo currently in place on reviews, I can’t tell you much more about this film. But it’s at the top of this list. So infer from that whatever you’d like. 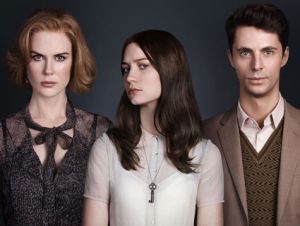 Stoker is gorgeously insane family drama (written by the star of the defunct Fox series Prison Break) full of murder and sexual awakening. The acting is uniformly strong (Mia Wasikowska, Matthew Goode, Nicole Kidman, Dermot Mulroney). The fluid camerawork and striking shot composition evoke a latter-day Goya. The dialog is riveting, with pitch-black humor that lacerates. I won’t spoil any of the surprises for you. The film unfolds like a slow-burn, psychotic fever dream.

3. Gravity (Alfonso Cuarón)
Holy shit. Those are two words you were probably thinking a lot if you saw Gravity in IMAX 3D. Sandra Bullock and George Clooney play astronauts stranded in space after satellite debris turns their mission into harrowing hell. The visuals are remarkable, and the drama inspiring. Director James Cameron called it “the best space film ever done,” featuring the “best space photography ever done.” I could argue with that. But why raise a fuss when the film is so damn good? Here’s a taste: 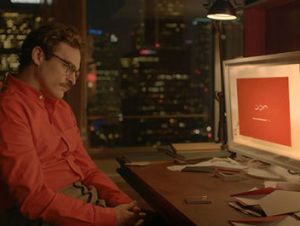 This sci-fi romance is set in futuristic Los Angeles and tells the story of Theodore Twombly (played masterfully by Joaquin Phoenix), a recently heartbroken man who falls in love with “Samantha,” the disembodied voice and personality of his computer and smartphone operating system (Scarlett Johansson). It’s also the only movie you’ll see all year in which Joaquin Phoenix has sex with a computer.

5. This is the end (Seth Rogen and Evan Goldberg)
Hands down, this is the funniest film of the year. This Is the End is pretty much Left Behind for potheads—but instead of bizarre and awful politics, there’s Emma Watson brandishing a scary ax.

The film stars a bunch of celebrities and Apatow-crowd comedians, mostly portraying oblivious, mean-spirited versions of themselves. Jay Baruchel; Seth Rogen; a cocaine-addled, over-sexed Michael Cera; Rihanna; Jonah Hill; Danny McBride; and Craig Robinson are partying at James Franco‘s house when… the Rapture commences. The result is an amazingly funny, densely vulgar ensemble comedy that features a killer soundtrack. It also includes the single funniest scene of the year. The prolonged and creative nature of the crudeness here is something to behold. Observe (NSFW):

6. 12 Years a Slave (Steve McQueen)
Yep, you can buy the hype: 12 Years a Slave is likely the finest film ever made on the moral travesty of American slavery. It tells the true story of Solomon Northup (a stellar Chiwetel Ejiofor), a free man who was drugged and kidnapped in Washington, DC, in 1841 and sold into slavery. Northup, a violinist and family man based in Saratoga Springs, New York, was forced to work on Louisiana plantations for a dozen years. The movie, written by John Ridley, is based on Northup’s 1853 autobiography Twelve Years a Slave.

All of the elements—the sublime performances, the music, the unflinching depiction of slavery—conspire to create a classic in the making. Here’s the most memorable song from the film, the spiritual “Roll Jordan Roll“: 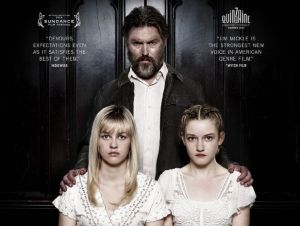 This horror film from writer/director Jim Mickle is influenced heavily by David Lynch and hardcore J-Horror. It’s a loose remake of the 2010 Mexican feature of the same name. Both versions tell a story of a family of cannibals, with the American incarnation bringing us into the life of the Parkers, a strictly traditional and twisted clan. Frank (Bill Sage), the hyper-religious patriarch, and his teen daughters Rose and Iris (the mega-talented Julia Garner and Ambyr Childers) live in a quiet town in upstate New York where they have long kidnapped, killed, and devoured in the name of god.

We Are What We Are is intelligent, emotional, and wickedly exciting stuff—and it has one of the most jaw-dropping climaxes in recent horror-flick history. I won’t ruin it for you, but let’s just say it’s a poetically filmed and surprising episode of chomped skin and open arteries. “It’s all about the character; the gore and extremity of it is the second priority,” Mickle told me earlier this year. “Beautiful girls, with beautiful dress, with beautiful music—feasting. It’s that catharsis. I want people leaving thinking, ‘What did I think of that ending?'”

There’s nothing about American Hustle that isn’t cool. The film—starring Christian Bale, Bradley Cooper, Amy Adams, Jeremy Renner, and Jennifer Lawrence—is loosely based on events surrounding Abscam, a sting operation the FBI launched in the late ’70s, originally to combat the trafficking of stolen property. The bureau recruited a convicted scammer named Melvin Weinberg to help craft and execute the operation, which involved setting up Abdul Enterprises, a fake company funded by fictitious Arab sheiks who offered to bribe people to pave the way for a new casino in Atlantic City. The operation morphed into an investigation of political corruption when politicians started approaching Abdul Enterprises for money. By the early ’80s, Abscam had led to the conviction of one senator and six congressmen. (The late Democratic congressman and Vietnam War vet John Murtha was also embroiled in the scandal, but escaped indictment and prosecution.) David O. Russell’s fictionalization is a compelling, briskly paced ride. 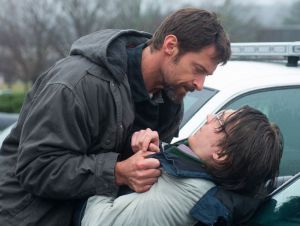 Director Denis Villeneuve and screenwriter Aaron Guzikowski‘s film is superbly acted and smartly made. It also happens to be the strongest anti-torture argument to come out of the movies in ages. Prisoners focuses on the Thanksgiving kidnapping of two daughters, one from the Dover family and one from the Birches. Hugh Jackman commands the screen as Keller Dover, a father who abducts and terrorizes Alex Jones (Paul Dano), a mentally impaired young man whom Keller is convinced took the girls and knows where they’re being held. Very quickly, Keller starts looking more like a villain than a sympathetic family man, as he tries to beat, scald, and bleed the information out of Alex.

The torture sequences are hard to watch, but I’d advise you to stick it out. The movie scores high marks as a gripping mystery, and as a terrifying human drama.

10. The Conjuring (James Wan)
The Conjuring is the scariest film of the year. It’s a fiendishly thrilling haunted-house/possession flick that’s miles above Saw, the 2004 indie horror film that brought fame to the director James Wan.

Here are a couple of scenes. See if you can get through them without freaking out:

The worst, lamest, most despicably terrible films of 2013 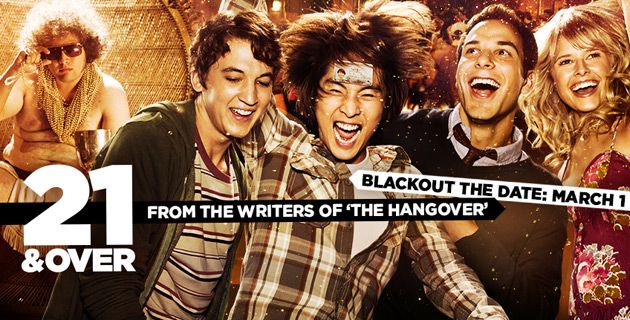 This college sex comedy is cinematic empty calories—an inexcusably tiresome romp showcasing hormonal drunkards, sorority girls, and dick jokes aplenty. But unlike all the other awful movies this year, this dumb little thing was actually at the center of a Chinese human rights controversy, making it a moral disgrace as well as an artistic one. 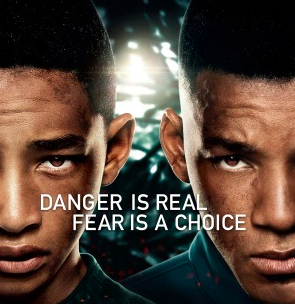 The marketing team of this film thought so highly of its writer/director M. Night Shyamalan that they went out of their way not to mention his name in advertising. 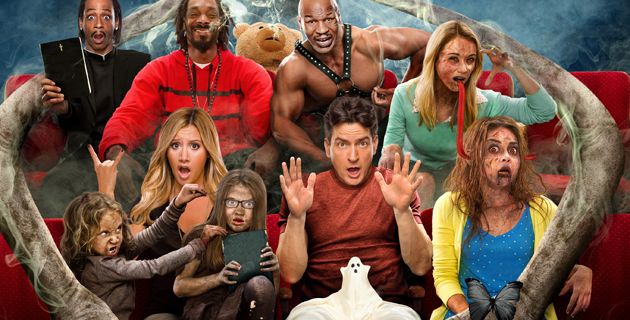 Why in god’s name?

The Coen brothers bring the folk and the poignancy.

A terrifically charming, love-conquers-all romantic zombie comedy (“RomZomCom“) that includes the best use of a Bruce Springsteen song in film that I’ve seen in a long while.

Fun fact: Canary Islands government officials pretty much issued director Justin Lin carte blanche to take over their highway and start blowing up everything in sight—from bridges to staged oncoming traffic—with a tank. (And, of course, RIP Paul Walker.)

If this HBO movie indeed marked Steven Soderbergh’s retirement from films, it was a lovely note to end on.

James Franco’s ridiculous “LOOK AT MY SHEE-YIT!” monologue should on its own win all kinds of honors.

A thoroughly enjoyable summer action-comedy—and Barack Obama and the NSA were cleverly incorporated into its marketing at the last minute.

This one has beautifully choreographed mayhem and a small-town sheriff played by Arnold Schwarzenegger. It had me smiling like an idiot all the way through it.

A hugely underrated film about Ryan Gosling and Josh Brolin forming a death squad in order to crush organized crime in Los Angeles.