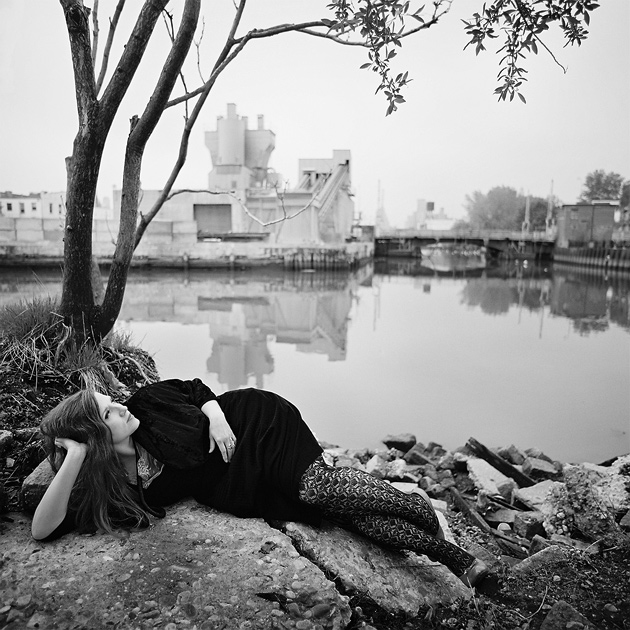 Since the release of her 2003 album, Catalpa, Jolie Holland‘s music has evolved from close adaptations of pre-war blues and ballads into deeper, more complex works. Holland grew up in Houston, boxed up inside a strictly religious family. She left home after high school and was essentially homeless for more than years, squatting and bouncing between Houston, Austin, and New Orleans. In this environment, her musical education was direct and unmediated—the music of Blind Willie McTell as influential and intoxicating as that of John Cage.

Holland has often been pigeonholed as a folk-blues-soul singer, but even from the beginning there has been something experimental and immediate about her approach. With Wine Dark Sea, her just-released sixth album, Holland exerts more control as a bandleader, setting her voice, as serpentine and wily as a rattlesnake at a Pentecostal meeting, against a more improvisational ensemble consisting of two drummers, three additional guitarists, bass and reeds. Photographer Jacob Blickenstaff spoke with Holland recently in New York City. The following is in her words.

I have a really tight relationship with the I Ching. You can see the lyrical influence all over the record. One of the basic statements of the I Ching is there’s a time when the most effective thing is to just do nothing. It’s really enormous. It’s about the flow of circumstance and of seasons. Songs like “Waiting for the Sun,” “All the Love,” and even the Joe Tex cover, “The Love You Save,” say that:

I want you to stop! Find out what’s wrong
Get it right or leave love alone
Because the love you save today
May very well be your own

“When you’re an undeveloped musician or artist, learning too much about theory can put the cart in front of the horse.”

Observation and engagement with ideas without explicit teachers is the global norm of how to learn things. So many people aren’t ready to go to art or music school, because it destroys their own agency in the work. I remember that feeling when I was a young teenager and was learning how to play. When you’re an undeveloped musician or artist, learning too much about theory can put the cart in front of the horse.

The voice is at the center of the compositions. You have to make sure that the band is augmenting that while expressing themselves, but at the same time not flattening out that complexity. Indigo Street takes the first solo on the record on “On and On.” When I gave her direction for that solo, I said I just wanted her to sound like she didn’t know what a guitar was, like something started a fire in her hand. I’ve been playing with her for a long time and I was trying to get her to play more noise. But with the absence of drums, it was harder for her to feel like she could go there. She said that me having a “pretty” voice held her back.

The approach on this album is more about bandleading than anything else. On past albums, I couldn’t get people to do what I wanted them to do. More volume helped; getting more people on stage and not being polite. A track like “Out On the Wine Dark Sea” is totally huge. There are no overdubs on that song, we’re playing live. To make this album we had to find the right room to get two full drum sets in with enough separation to record but still together. There are three electric guitar players in that same room. I was in the isolation booth with piano or guitar. Recording it was a real challenge. Douglas Jenkins, my co-producer, had never engineered something like that before.

We developed the sound during a weekly residency at a small place called the Jalopy Theater in Brooklyn. We’d have two drum sets on the stage and we’d go through the songs, and then we’d also have an improvisation set. I would tell stories from the book that I’m working on—true ghost stories and strange occurrences told to me by friends—and the band would play behind me so they could get used to moving together. I think some of my nerdier fans didn’t like it but fuck it.  I warned them, “This is not a normal show.”

“I just wanted her to sound like she didn’t know what a guitar was, like something started a fire in her hand.”

My friend Stefan Jecusco has a great saying: “It’s impossible to be sexy and nostalgic at the same time.” Most people listen to old music and they experience it as nostalgic; they can’t get inside it and don’t have a nonlinear sense of history. When I first heard Blind Willie McTell, I just had a crush on him, it just felt real even though he was speaking and playing in a different way than people do now. I hear melody in a more complicated way than other people do—so much of it comes from Blind Willie McTell. He is the guy who taught me how to sing. It’s all about microtones and internal phrases.

One thing about old songs, if we are listening to them now, then we know they’re good. They went through the filter, they stood the test of time: McTell, Stevie Wonder, Prince, Beyoncé—a good song is a good song.

“If you are playing a song that you wrote, then you are still covering that song.”

With singing covers, it’s not nostalgia; it’s happening right now. Being on stage is a responsibility, an opportunity. All of these people are paying attention to you. Your present psychological experience will be affecting everyone. The more you can release your resistance to being in the present moment, the more you are providing people an opportunity to do the same. If you are playing a song that you wrote, then you are still covering that song.

I love what Tom Waits said: “We all love music, but what we all really want is music to love us.” That kind of unity in your being on stage is what has that power. ­­

“Contact” is series of portraits and conversations with musicians by Jacob Blickenstaff.