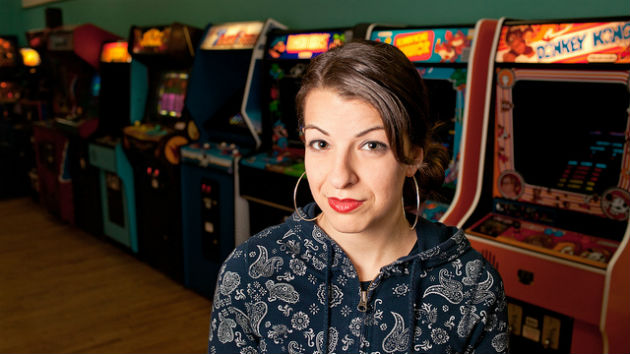 Anita Sarkeesian, 30, was raised on computers. Her dad was a networking engineer, and she spent the majority of her free time as a kid rocking a Game Boy. But once it hit her that the pop culture she consumed often stereotyped girls and women, she decided to devote much of her education to studying gender. In 2009, she launched Feminist Frequency, a video blog that deconstructs how girls and women are shortchanged and generally dissed by the makers of video games and other pop-culture offerings. In 2012, she launched a project that specifically targets sexism in video games. Among other topics, her videos, which attract hundreds of thousands of YouTube views, have taken on Ms. Pac Man, the Manic Pixie Dream Girl meme, Smurfettes, the 2011 movie Damsels in Distress, and the lame way Legos are marketed to girls.

While her insights have made her a hot ticket at TED talks and tech conferences, Sarkeesian’s ongoing “Tropes vs. Women” series sparked a ruthless backlash (which, naturally, she documents). Among the haters’ ignoble acts: vandalizing her Wikipedia page with degrading slurs, sending her illustrations of her being sexually assaulted, and even creating an online game titled “Beat Up Anita Sarkeesian.” Internet to the rescue, though: Sarkeesian met her $6,000 Kickstarter goal for the series in less than 24 hours, and has since raised more than 25 times that much to expand it. Game over for the trolls.

Mother Jones: You were already looking at how women are portrayed in popular media more broadly. What made you decide to really zoom in on video games, and do it as a video series?

“I’m no stranger to a bit of sexist backlash, but I was surprised by the level of vicious and misogynist hate I received.”

Anita Sarkeesian: I wanted to make feminism more accessible. And I really wanted to engage with my own generation, one that is increasingly speaking in an audio/video multimedia language. It also provides me the opportunity to directly integrate visuals of the games, movies, comics, or TV shows I’m discussing.

MJ: So how many video games have you played in the name of “research”?

AS: A few hundred so far.

MJ: Did you expect some harassment from your project?

AS: I’m no stranger to a bit of sexist backlash, but I was surprised by the level of vicious and misogynist hate I received, which included a loosely organized campaign of death threats, rape threats, and attempts to collect and publicly distribute personal information such as my home address and phone number. I continue to be subjected to sustained, daily harassment even now, a year and a half later. My detractors have worked together to flag my YouTube videos in attempts to get them taken offline. They have created hundreds of slanderous videos spreading misinformation about me and my project, and they regularly fabricate fake quotes and attribute them to me in an ongoing effort to discredit my series.

MJ: Why do you think this happens?

“Some male gamers with a deep sense of entitlement are terrified of change.”

AS: The gaming industry has been male-dominated ever since its inception, but over the last several years there has been an increase in women’s voices challenging the sexist status quo. We are witnessing a very slow and painful cultural shift. Some male gamers with a deep sense of entitlement are terrified of change. They believe games should continue to cater exclusively to young heterosexual men with ever more extreme virtual power fantasies. So this group is violently resisting any movement in the direction of a more inclusive gaming space.

MJ: They’ve kind of proven your point, haven’t they?

AS: I wouldn’t wish this kind of harassment on anyone. My team and I made the difficult decision to document it and strategically share examples to demonstrate how invasive and dangerous it can be, the hope being that my situation could bring wider attention to the issue. And it did: There have been scores of articles, news stories, and TV and radio interviews on the topic. The downside was that the harassment targeting me increased exponentially.

MJ: Have you seen any positive signs?

AS: I wouldn’t call it a silver lining, but with more women speaking up, online harassment is beginning to be taken more seriously. Pressure is being put on services like Facebook, Twitter, and YouTube to take responsibility for their communities, and for news sites to have stricter moderation of their comment sections. Demands for law enforcement and government agencies to take digital threats of violence seriously are just now starting to gain wider exposure. We’re also seeing a small handful of game developers and publishers who are actively exploring ways to create less-toxic online gaming environments.

MJ: How do you choose which games to analyze?

“We’re already seeing the impact: It’s now not uncommon for developers to be challenged directly about their portrayals of women.”

AS: We identify titles we believe might include the trope in question and then play as many as we can. We like to show a wide range of examples—the most popular mainstream franchises as well as lesser-known or indie games. Originally we set out to create five short videos, but due to the success of the Kickstarter fundraiser, we expanded to 13 longer, more in-depth videos. We are also producing a free classroom curriculum to accompany them. I felt it was important to illustrate that it’s not just an issue with a handful of games or developers, but that the negative ways women are portrayed is actually a deeply systemic problem. We’re already seeing the impact: It’s now not uncommon for developers to be challenged directly about the portrayals of women in their games. I’ve also heard from industry insiders that developers are starting to have conversations about how to improve the representations of women in their upcoming releases.

MJ: What’s the most ridiculous trope you’ve come across?

AS: They are all pretty bad, but I think “Women as Reward” is near the top of the list for most depressing. It’s when women are used as an incentive or reward for the player’s accomplishments. An early example is the classic 1986 Nintendo game Metroid. The better a player does, the less clothing the female protagonist is wearing at the end.

Watch below as Sarkeesian deconstructs what she calls the “Ms. Male character,” and also read our sidebar, “How Sexist Is Your Favorite Video Game?” wherein she briefly outlines more of the most annoying and insidious pop-culture tropes.