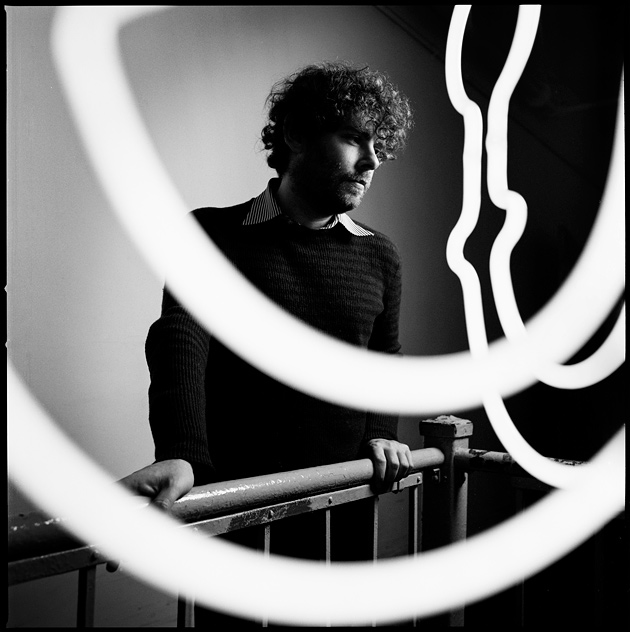 Gabriel Kahane grew up in a world of classical music. His father, Jeffrey Kahane, is a concert pianist and director of the Los Angeles Chamber Orchestra. With his new album, The Ambassador, this week, Kahane takes a big leap in his transition from classical polymath to pop songwriter and rock musician.

He hasn’t given up any of the complexity of his music; several songs are intricate contraptions of poly-rhythm, odd time signatures, harmonic shifts, and deft melodies that weave through it all. Conceptually, The Ambassador examines Los Angeles through its architecture. (Los Angeles Times architecture critic Christopher Hawthore wrote the liner notes.) The album delves into themes of darkness, light, culture, and history, using a street address as a starting point for each song. Kahane’s website even features an interactive map.

The album is a marvel of musical engineering and a swirl of cultural references, but the real achievement is that it is an engaging, exciting, and approachable rock record—the musical and conceptual devices serving the songs well. It helps to have a great band, too, propelled by drummer Matt Johnson, the rhythmic engine behind Jeff Buckley’s Grace—as well as Sufjan Stevens collaborator Casey Foubert, and Rob Moose, who was involved with Bon Iver. I spoke with Kahane in Brooklyn, where he currently resides. The following is in his words.

I was born in Los Angeles but I didn’t grow up there. As I started to go back as an adult, I found all the clichés be false; besides the sunshine and the film industry, there is this whole other texture to life that is so deeply felt and poignant and aching. This record was an effort to unpack those feelings and to juxtapose the mythological representation of LA in film, TV, and fiction with a physical city that is incredibly prone to earthquake and fire and flood. The buildings this album is based on sit at the intersection of those two LA’s, because buildings are a aesthetic projection, a mythology, but they also burn down and crack in earthquakes.

“I build things in layers. I sometimes have a vague grand vision, but it’s very blurry.”

There is also a kind of etude element in that a lot of songs that I’ve written are studies in some technical problem, like can I sing in three while my right hand is playing in seven, but then also trying to bring it back to something human and emotionally direct. The great etudes of Chopin or Ligeti or Debussy, they transcend the technical problem they are trying to deal with and become incredibly beautiful pieces of music. Lyrically, they are like etudes too: How do I tell this novelistic story in three stanzas? If you don’t set yourself a limitation in art, it’s so overwhelming. To me, there is incredible freedom in setting a rule as an organizing principle to get started.

I build things in layers. I sometimes have a vague grand vision, but it’s very blurry, almost like I’m squinting at this thing that is 50 feet away. With orchestration, I do what probably the painter would do by first, making the pencil drawing and then going to the canvas. When I’m making a record, I do the skeletal stuff first. We recorded the basic instruments and scratch vocals, lived with that stuff for a few weeks, then went back and wrote the string and horn arrangements. There are so many things we are juggling in our lives subconsciously, but we continue to breathe as we are having this conversation. That’s why we study and why we practice, so that those things can become second nature. With writing, there is usually a single emotional or intellectual impulse that is driving the thing I’m making, and then it’s about figuring out how to put all that stuff together.

The musical devices are really secondary to trying to get inside the characters that inhabit these buildings. I’m inventing an interior monologue for characters that exist in other pieces of popular culture, and there are characters who are invented who come out of an idea that is more sociopolitical or geographical. There’s a book by Mike Davis called Ecology of Fear that talks about catastrophic fire in Los Angeles. He discusses this amazing, horrible phenomenon where in Malibu every year you have these terrible fires because the land naturally wants to burn to renew itself, and all these homes built in these vulnerable places prevent these natural fires from happening. All this natural energy is stored up, so when the fires do happen, it’s a huge mess.

“I thought, ‘What if there was this arsonist character who stands in for that discursive discourse.'”

In 1994, When Newt Gingrich was Speaker of the House, he rammed through this legislation to change FEMA’s policy so that every dollar in disaster relief had to be offset in social spending. When these fires were happening after the Northridge earthquake and Richard Gere’s house burned down, essentially what happened was that FEMA was rebuilding Richard Gere’s house on the backs of poor people. In Downtown LA, you had slum hotels that had horrific fires because there was no fire code and the slumlords wouldn’t fix it. At the St. George, the address for “Slumlord Crocodile,” four fires over a period of 60 years killed a total of 150 people. I thought, “What if there was this arsonist character who stands in for that discourse,” because it’s hard to write a pop song and deal with all of that discursive stuff—you try to humanize it.

One of my explicit goals is to make music that sounds simpler than it is. Part of that probably has to do with my father. I watched his continued frustration at getting young audiences into the concert hall. In college, I had this English professor whom I really loved, and I was taking some pretentious class on postmodern literature. He told me about this idea that comes from Jacques Derida. His idea was that the text inside the frame is received differently depending on what the frame is. So if I go to Rockwood Music Hall and I play this complicated song but I’m singing in an unadorned non-vibrato way, it reads very differently to people in that club drinking a beer than if it was a jewel box concert hall.

When I finished school I came to New York and was writing songs—not classical music. It was not until after I made my first record of songs that people in the classical world started taking note and saying, “Oh, you can do all these things! You should write a string quartet.” Sometimes there’s this perception that I’m a classical composer who decided to write songs, but it’s actually the other way around. I think the the classical music world has just paid more attention. If I were to be really frank, I’d hope that this record would give me more credibility in the world of songwriting. It feels like that’s happening.

“It’s like constructing a meal…The basic chords are spaghetti and meatballs…but there’s going to be a beet salad, and then a crostini of sardines and salsa verde.”

When I look at the songwriters I really admire over the past 200 years, whether it’s Paul Simon or Judee Sill or Charles Ives, Lennon and McCartney, Franz Schubert, or Benjamin Britten—no matter how complicated things get in the arrangement, the melodies are always good. There is an aggressive sleight-of-hand for me in songwriting: Keep the melody totally accessible. It’s like constructing a meal. I like to cook a lot. For me, the basic chords are like spaghetti and meatballs, but I’m not going to serve that as every course. There’s going to be a beet salad, and a crostini of sardines and salsa verde. In music theory, the British terminology for “chorus” is the “release.” Take Brian Wilson’s “God Only Knows.” It’s so fucking good because the harmony starts off so thorny and chromatic and angular and then suddenly it hits the chorus and it’s the four chord, to the minor three, to the two and it’s like the sky opens up. So much of pop music is only the release, and it stops feeling like anything.

One of the the things about Los Angeles that became clear to me was an understanding of what “noir” means. Film Noir could really only be invented in Los Angeles; the juxtaposition of sunshine with the shadowy underbelly of the city. There is this image in “Empire Liquor Mart,” which is based on the the story of Latasha Harlins, a 15-year-old black girl shot to death in a liquor store by a Korean woman 13 days after the Rodney King beating.  I was reading a book called The Contested Murder of Latasha Harlins and started doing a free-write. I imagined her in the moment after her death as she moved into another consciousness, rising up over the city and watching the riots unfold. An amazing part of flying into LAX at night is seeing the lights of the basin, I had this image of the electric lights of the city and the fires of the riots. That inspired the line “now two kinds of light from fires and fixtures they fill the sky.” That became a rallying cry for the album.

The record is trafficking in all these different qualities of light: the neon of the Bradbury Building that inspired Blade Runner; the opening song, which is about standing on this vista and seeing the light of the city; “Slumlord Crocodile” which is all about fire; “Veda” which is an homage to that incredible Joan Crawford film Mildred Pierce.

I think about the Ambassador Hotel, the basis for the title track, and the tragedy of its demise. It was really the first place where after it closed Los Angeles had a sense of its own history. And that by tearing it down they were standing to lose a piece of their history—it had so much history of the early Hollywood stars and their mayhem and bacchanalia. I imagine this hotel fading like photograph that has been exposed to sun over time. The album for me starts very dark, not in terms of mood but in imagery, and as it progresses it lightens. Not like in a happy, positive way, but like the whole thing is fading to white.

“Contact” is a series of musician portraits and conversations by Jacob Blickenstaff.