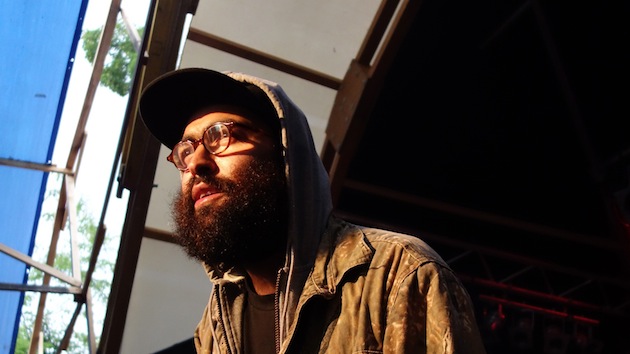 A lot of musicians can’t run fast enough from their first big hit. Led Zeppelin wouldn’t play “Stairway to Heaven.” Madonna hates “Like a Virgin.” And if you ask Radiohead to play “Creep,” Thom Yorke might tell you to fuck off (if he deigns to respond).

Not so the guy who broke through as one-third of Das Racist, the rap group behind “Combination Pizza Hut and Taco Bell,” which was memorialized by The New York Times in 2009 as “an entrancing but numbing track based largely on the repetition of the title phrase.” Victor Vazquez, the 30-year-old rapper, punk rocker, novelist, and visual artist also known as KOOL A.D., parted ways with Das Racist in 2012, but says he tries “to think of everything I do as part of a continuous idea—I guess because it is all one continuous idea, in that all human life is one continuous idea.”

Peep the artwork, and you’ll get what he means. Maybe.

Vazquez is quick to point out that the hooks for Pizza Hut/Taco Bell and “Michael Jackson,” another of Das Racist’s hits, both came from a song he wrote in 2006, before the rap crew existed. Broadly speaking, his work feels remarkably consistent across his various media—a strong sense of unity emanates from beneath the seeming chaos. Vazquez’s mind is sensitive and humanistic, preoccupied by the philosophical challenges and existential absurdity of living in American society, yet nonetheless living as a part of it. 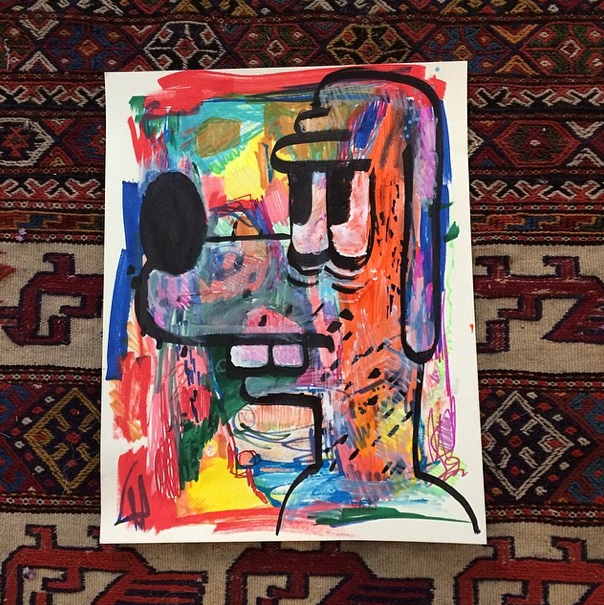 He’s also absurdly prolific. A few months ago Vazquez married Saba Moeel, a fashion designer/musician he’s known since he was 15. A baby is on the way, and so is a book: O.K., A NOVEL, due out this fall, is a 442-page experimental narrative done as 100 fragmented episodes. Vazquez frequently switches up the narrators and breaks from standard prose into lists, screenplay-style scripts, dictionary entries, tweets, and fake ad copy.

His drawings and paintings, which gained some prominence in a 2009 “cartoon-off” with The New Yorker‘s Farley Katz (widely deemed to have ended in Vazquez’s favor), have shown in galleries in Oakland, California, and New York City. An internet-age artist through and through, he also sells visual art pieces via Instagram—some go for hundreds of dollars in seconds. The KOOL A.D. Twitter feed is itself a spectacle, and its oblique comedy and wild musings were partially compiled in Joke Book, his 33-page chapbook of “axioms and aphorisms,” such as: “NPR is to Fox as Starbucks is to Dunkin’ Donuts in that who cares” and “If you’re using a French word to describe it, it can’t be all that ‘avant-garde,’ now can it?” You can almost feel his mischievous smile.

“NPR is to Fox as Starbucks is to Dunkin’ Donuts in that who cares.”

The records keep dropping, too: Vazquez’s Bandcamp page now advertises 12 solo releases, with six full-length albums since 2012. He plans to make his latest, WORD O.K., a “visual album” (a la Beyoncé) with videos to accompany each track.

It’s hard to get much further from Beyoncé than WORD O.K., though. The video for one song, “WORD,” is a three-and-a-half minute, highly NSFW animated short that feels like an acid-fueled journey through a dystopian corporate carnival. It pans smoothly from Bart Simpson wearing a McDonald’s tee and smoking a joint to a sexualized, anthropomorphized rabbit doing the same. Yin-yangs, peace signs, and other pop symbols breathe in and out of cartoon orifices.

His associations might seem offhand, but really they are part of a thoughtful effort to deconstruct and rearrange cultural objects in ways that challenge our deepest assumptions. “We are all part of one universal organism, but at the same time we’re also distinct individual creatures,” he says. “It’s a paradoxical duality that, say, the yin-yang, as one of many symbols or combination of symbols, describes in a sort of shorthand.”

O.K., A NOVEL comes out this fall.

The ability to perceive the universal in particular moments and places, creating heightened impressions that encourage broader, often subversive, considerations, is where Vazquez’s work shines brightest. In “Open Letter,” the five-minute opener of WORD O.K., he raps: “The ice might melt and drip away / But picture yourself rolling in a Lincoln / Seeing pawnshops slink in your peripheral vision / And drift away.” On “Special Forces,” the final track, he takes a completely different rhetorical tack, bluntly repeating “Polo is owned by Nestle,” three times in a row.

In conversation, Vazquez is more explicit about how he relates to the world, artistically and politically. A proud San Francisco Bay Area native (three of his recent releases, 51, 19, and 63, are named after local bus routes), he’s outspoken about the impacts of gentrification.

“You’re trying to develop products…that are ostensibly going to enrich those people’s lives? When you don’t know a single thing about them?”

“There’s nothing wrong with a couple new coffee shops or bars or restaurants,” he says. “But the rich people that move to a spot because it’s ‘cool’ often enough don’t really understand the politics of their being there.” He points to the tech industry: “You might take a private bus line to your software development company or whatever and essentially live a life that’s completely segregated from the majority of people in the world, and in the meantime you’re trying to develop products and concepts that are ostensibly going to enrich those people’s lives? When you don’t know a single thing about them? Don’t even ride the bus with them? Eat at a restaurant that replaced the restaurant they used to eat in and is now too expensive for them to go to? That kind of atmosphere breeds resentment and contention.”

When I ask if any particular political label suits him, his answer is characteristically circular: “I mean, I appreciate art and music and religious and spiritual concepts and, like, even drugs and socializing and sex and conversation and mediation as means of learning and acting that are less hampered by the seemingly inevitable dogmas you tend to find when you follow any argument about how people are supposed to live to its ‘logical’ conclusion.” As for thinkers who have influenced him, he sends me a list of more than a hundred names, including Swizz Beats, Jay-Z, Andy Warhol, Frantz Fanon, John Zerzan, Chimamanda Ngozi Adichie, and Walter Benjamin.

So it’s hard, perhaps even for KOOL A.D., to predict exactly where he’s headed. Will his fans age with him, and stay along for an unpredictable ride? “I have a feeling some of my fans aren’t aging at all. Some might even be growing younger,” he says. “I’m trying to crack the immortal demographic.”