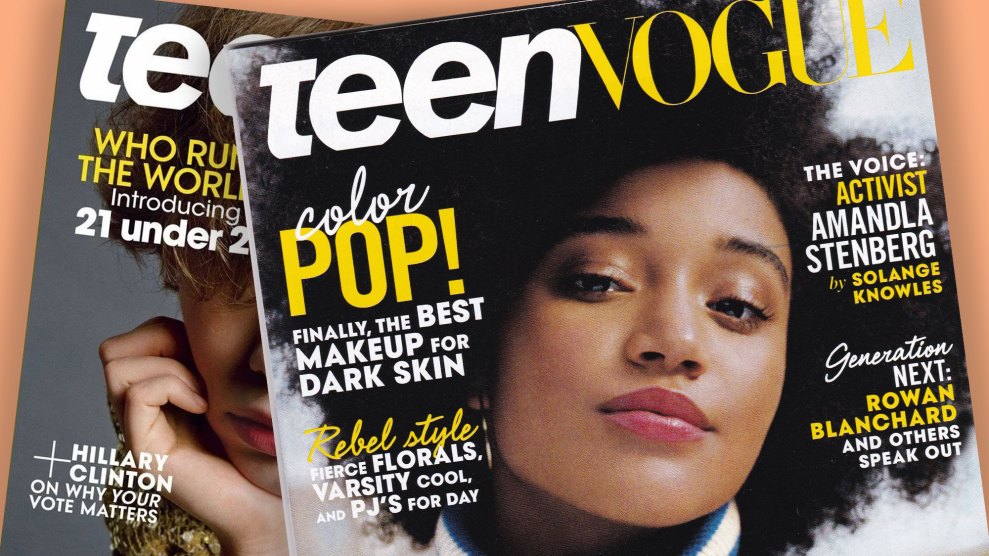 Over the last few months, Teen Vogue‘s clear-eyed, accessible coverage of the Trump administration has caught the collective attention of the internet. A major force behind Teen Vogue‘s recent work is Lauren Duca, the magazine’s weekend editor. Her piece on Donald Trump’s gaslighting of the American people went viral back in December, as did her powerful response to Fox News host Tucker Carlson, after he suggested on air that instead of writing about politics, she should “stick to the thigh-high boots.” Cringe.

But Carlson’s comment was actually less annoying to Duca than the fawning masses who seem so surprised that a magazine for teenagers can also produce great news commentary. I talked to Duca, whose new column launched last week, about her role in shaping Teen Vogue‘s work—and why the magazine’s political coverage reaches far beyond its target demographic. 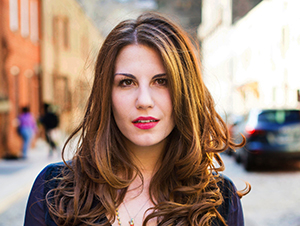 Mother Jones: How did you start writing politically opinionated pieces for Teen Vogue?

Lauren Duca: Their mode of coverage has been really rigorous and committed to informing their audience since I started [in January 2016], and also earlier. I was on the weekend that the Pulse shooting happened. It was really a high level of support editorially for taking these things on in a way that was unflinching and honest. So it was honestly kind of an organic segue into becoming more political as things took on more urgency. My job on the weekends was just to be deciding what the coverage was for the weekend. So that meant everything from Selena Gomez has a new Pantene ad to Donald Trump is lying to the American public. That was the scope of possibilities.

I think the reason they hired me, too—it wasn’t just a random thing. I had a culture column called Middlebrow at HuffPost and a reporting background. But weekend editor is typically a more starting-level position, and they took someone who they knew did a lot of cultural analysis. And when I say “they,” I mean specifically Phil Picardi, the editorial director. So hiring me was a very deliberate choice. It was kind of like, these are the ethically driven people with skills that are already in place. And this was kind of the work that Teen Vogue was already doing. So people being shocked is a little annoying.

MJ: It seems like just since Trump was elected, Teen Vogue has really ratcheted up the coverage. Was there a particular moment that you felt a real shift at the magazine?

“It’s all, ‘Ugh, millennials and selfishness and narcissism,’ and ‘oh my god, they’re taking selfies.’ It’s like, ‘No, this is how we’re interacting with our world, and it’s different from the way you interact with your world, and by the way, thanks for the mountains of debt.'”

LD: When I came on, it was already the kind of place that was doing that kind of thing. The wellness stuff, for example, is political in a nontraditional way. LGBTQ work and mental health work and being frank about sexuality—all those kinds of areas where they’ve been “woke” for a long time. It’s just taking on that mode of informing young women, and just a natural segue into traditional politics.

MJ: So it’s annoying that everyone is kind of fawning and surprised that Teen Vogue is showing up with political coverage.

LD: Yeah, there’s a spectrum of those responses. There’s definitely a mode of stealthy condescension sometimes, where I’m almost relieved by the Tucker Carlson comment in a way. Because the sort of “stick to the thigh-high boots” denial of access to a political conversation is such an explicit version of what I was already kind of itching over with the response. Other versions of the Tucker Carlson comment: “Her last post was about Selena Gomez’s makeup.” And it’s like, yes, it’s possible to do both those things, especially because I was on weekends. That’s part of why I didn’t have a specific beat. But the moment we’re living in right now, a politically active voice is required of everyone, and they’re still allowed to have nonserious interests. And I don’t see why that’s not true for young women.

LD: It’s so frustrating. Especially because there’s so much political potential for young people. Millennials are now as big of a segment of the population as baby boomers. If we can actually can get everyone to show up and vote and be active, there’s a potential to shape elections for the next 35 years based on those statistics. I think young people absolutely care. They care in different ways. That generational divide, how it shows up in political discussions is especially ugly. It’s all, “Ugh, millennials and selfishness and narcissism, and oh my god, they’re taking selfies.” It’s like, “No, this is how we’re interacting with our world, and it’s different from the way you interact with your world, and by the way, thanks for the mountains of debt.”

MJ: So when you write, are you writing for millennials or teenagers?

LD: The audience for Teen Vogue is young women specifically. I think the reason the [Trump] gaslighting article did so well was that it wasn’t like, “Hey, teen girls.” It was like, “hey everybody.” I think the idea of political coverage that’s accessible to young women, the reason it took off so much is because so much of political coverage—people feel alienated from it, they don’t necessarily have the news literacy to make sense of everything. Everything is legitimately confusing. I think that things that are accessible to more people are just going to empower more people with information. And I think there are more people reading Teen Vogue now. I certainly get a lot of letters like, “I’m a 64-year-old man, and I certainly never would have read Teen Vogue before.” It’s like, relax. In the column I’m starting, I’m hoping it can be breaking things down and providing resources on what to read and what to prioritize in thinking about all the drain clogging and disinformation from this administration. I would love if that went beyond the typical readership.

MJ: What are you hearing from the actual teen readers of Teen Vogue?

LD: I’m hearing some really cool stuff. I have people doing school projects on me, which is insanely amazing. Yesterday I got an email from a high school junior who was doing a speech on me and my work, and do I have a message for her audience. I was like, this is insane, this is incredible. So yes, it’s reaching the people it’s meant to reach, too.