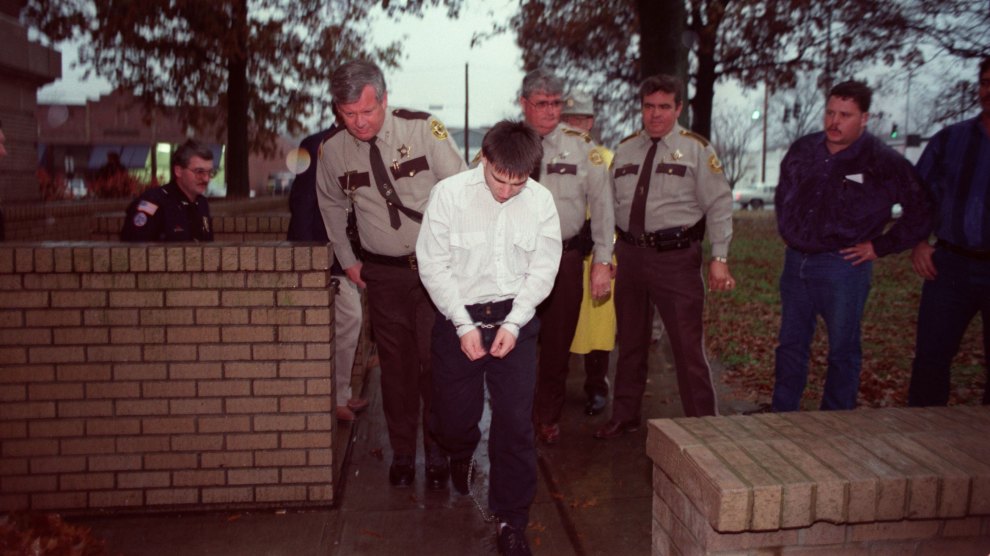 When Mara Leveritt looks back on her time covering the West Memphis Three case, she is reminded of her favorite quote from Joseph Conrad: “The belief in a supernatural source of evil is not necessary; men alone are quite capable of every wickedness.”

In the mid-1990s, sensational headlines about the West Memphis Three, the group of teenagers accused of killing three young boys in a satanic ritual, were seemingly everywhere. Leveritt, then a reporter for the Arkansas Times, took a more measured approach. While prosecutors and journalists chased paranormal explanations of evil, she examined the very human systems of corruption in front of her. Leveritt became an authority on the case—she wrote two books, continuing her work into 2011, when DNA evidence surfaced that led to the release of the three men who were accused of the murders.

Now, the West Memphis Three case is back in the cultural lexicon. Season three of HBO’s crime drama True Detective is set in the fictional “West Fingers”; the plot involves Dungeons and Dragons, bikes, and the disappearance of children; and the mysterious death of a mother complicates a previous prosecution. Leveritt has been cited as a potential inspiration for Cameron Ejogo’s character, Amelia Reardon, who writes a “true crime” book about the show’s case.

The similarities end there. Whereas Reardon seems to harbor an obsession, if not an outright connection, with the crime, Leveritt’s careful reporting is less about the sordid details and more about the shortcomings of public officials. She says she has no plans to watch the show. “I figure I’ve had enough true ‘true crime,'” she notes. “I don’t want to go there for entertainment.”

I called her to discuss her work in the real West Memphis Three case and how it reflects broader injustice within the criminal justice system.

Mother Jones: Reproductions of your reporting on the West Memphis Three tend to be preoccupied with satanism or mysticism. But how did you think about the story? Do you consider it “true crime”?

Mara Leveritt: I think of it as “true corruption” writing—the corruption of the criminal justice system.

You know, it’s easier to talk about “the bad guys,” “those nasty killers,” “those nasty people.” Somebody does a horrible thing; we get ’em. But if it’s darker than that, if it’s somebody on our own side who’s done it, that’s far scarier to me, far more problematic, far more important that we look at it and know it.

MJ: Did you realize that at first? What attracted you to dig deeper?

ML: The FBI had released a report about its inability to confirm any of the cases of “recovered memories” and “occult ritual murders,” because that was a big deal nationally in the early ’90s. I wrote an article confronting this bogus science. And so that was the background for me when these murders happened. Plus, I had a son at the time who was interested in Dungeons and Dragons, and he had suffered a lot of criticism in his rural high school for even going near that game. I had a daughter who liked heavy metal music—the same thing. So I was aware of these sensitivities.

Once the verdict came down, I became very curious about the basis for those guilty verdicts. When I began to examine that more, I began to think it was just air: It was rhetoric from the prosecutors, it was manipulated and withheld evidence from the police, along with some very helpful rulings that the judge made, that led all this to go the way it did.

MJ: Often we talk about the West Memphis Three case as a small town swept up in satanism. But wasn’t it more about how the officials accepted those suspicions and trotted them out at trial?

ML: Yeah, well, we talk about the town and its susceptibility. But I think if you look at the leadership of people who are on the public payroll—who the town looks to take care of these things—then that’s where the problems lie.

The police were not able to do an effective job: A month passed and the police there still had not gotten autopsy reports from the state crime lab. The chief detective said, basically, “We’re working blind; our hands are tied.” And then there was the willingness of the police to question Jessie Misskelley, the 17-year-old, the way they did, under the terms that they did. They knew very well his educational background and his handicaps and they only recorded half of his interrogation. In that recording, for instance, they began leading him. Jessie started saying, “Well, we went to the woods in the morning.” And the police knew that the boys were all in school at that time. You hear the police saying, “Well Jessie, could it have been closer to noon? Well, Jessie, what about was it after dark?” Because he could be led like that.

Then in step the prosecutors who were willing to accept these problems with the testimony. The judge signs an order for midnight arrests of the other two boys. From then on, it was a matter of what could be taken to the jury and how all of this could be played.

MJ: There’s a lot of narrativizing done by prosecutors, right? How can a prosecutor’s ability to tell a story change a case?

ML: It is all about the story. For this case, the story in court began with the two bicycles that were taken out of the creek where the bodies were found. The prosecutor had those two bikes, and the judge allowed those two bikes to sit right in front of his bench the entire time. Imagine the emotional impact that might have on the jury—to always remind the jurors about who had been killed here and their size. If you’re talking about how they formed a narrative, that was a visual imperative for the prosecutors.

The prosecutors did not have a clear motive to show why these teenagers had gotten up one day and gone to the woods to kill these three little boys who they had never met. It was a big, big hurdle. So they had consultations with the judge about introducing a satanic motive. In the second trial, for Damien Echols and Jason Baldwin, there’s a point where the prosecutor and the defense are having an on-camera meeting in front of the bench with Judge David Burnett. They’re discussing what’s going to happen. “Are you going to introduce motive here?” And the judge says to the prosecutor something like, “I won’t mind if you bring up the satanic thing.” That comment did not make it into the transcript, even though those little sessions in front of the judge’s bench are supposed to. But that comment—which is so volatile—was not caught until years later.

Then they bring in an expert on the occult. Well, how do you even get certified in the occult? The defense had researched this guy, Dr. Dale Griffis, and determined that his doctorates had been obtained from a mail-order university. So he got on the stand and the defense shredded any claim he had. Then the prosecutor had their linchpin witness whose whole credibility has been shown to be fraudulent. But Judge Burnett said, “That’s okay, I’m going to allow Griffis because I think in Arkansas you don’t even necessarily need to have a third-grade education to be qualified as an expert in the occult.”

His testimony ended up being very powerful and very necessary for the prosecutors’ plans. And it was persuasive.

ML: Yes, that’s right. There are very few places that have any checks on prosecutors, other than that it’s an elected office. The theory is, we won’t reelect them if they’re no good. But who is checking up on the prosecutors? How do we even check on prosecutors? And how can we hold them up to any kinds of standards? Most states have no laws about anything like that.

MJ: Even elections can be misaligned. At the time, success was measured by how many people a prosecutor puts in prison. The prosecutor on the West Memphis Three case needed to get a prosecution to stay in his job, right?

ML: Absolutely. Your career path, generally, is from prosecutor to judge. If you want to end up being a judge, starting off as a prosecutor is a good way to do that. David Burnett, the judge in this case—that was his career path. John Fogleman, the prosecutor, had judicial ambitions. He ran for Supreme Court judge here and lost, I think in large part because of the publicity about this trial.

But another insidious part of the judicial election is that once we adopted the language of tough-on-crime in the ’70s, then it was about who could be the toughest—it became like this self-fulfilling race. “I’m tougher than you are so I need to be the judge, I’ve got more wins in my column, I have shown how tough I am.”

MJ: Your book is often brought up as an emblem of the satanism craze in the ’90s. Now, satanism is considered ridiculous to bring up in a trial, but judicial and prosecutorial misconduct isn’t so ridiculous.

ML: I leave it to other people to get into the minds of psychopaths and the people who do terrible things. As a reporter, I’m more interested in where the government becomes involved in furthering crimes. If you throw on a betrayal of trust by your elected officials or the people you’re paying to do a job—your police, your judges, whoever—then it becomes exponentially worse.