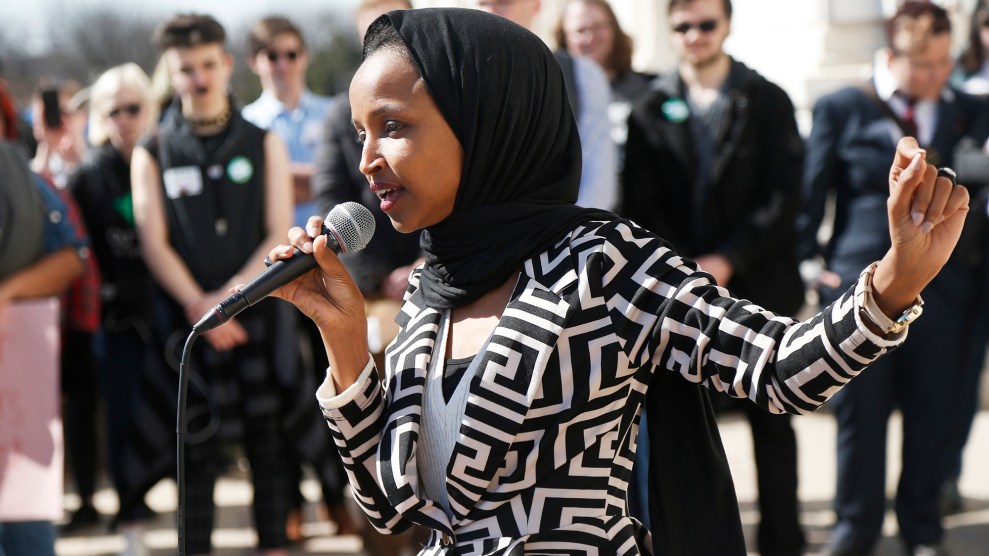 Two years ago, about a thousand Yemeni American corner-store owners in New York City closed their businesses and gathered to protest President Donald Trump’s ban on Muslim travelers to the United States. The stores, known as bodegas, can be found across the city and help keep New Yorkers ticking with morning coffee, deli lunches, and newspapers.

Now these bodega owners are flexing their political muscles again to show their solidarity with Rep. Ilhan Omar (D-Minn.), who continues to face attacks from the president and Republican pundits for her recent comments about 9/11.

On Thursday, the New York Post published a front-page image of the Twin Towers up in flames alongside a snippet of a quote from a recent speech by Omar that, out of context, appears to suggest she does not appreciate the seriousness of the tragedy at the World Trade Center. On Saturday, bodega owners with the Yemeni American Merchants Association, which formed after the travel ban protests, announced they would stop selling the newspaper because of the coverage of Omar.

As I wrote in this piece, during Omar’s full speech, at a March banquet for a Muslim American civil rights organization, the congresswoman was urging Muslim Americans to stand up for their civil liberties, which she argued had come under attack in the years since 9/11. “Far too long we have lived with the discomfort of being a second-class citizen, and frankly, I’m tired of it, and every single Muslim in this country should be tired of it,” she said in the speech. “CAIR was founded after 9/11 because they recognized that some people did something and that all of us were starting to lose access to our civil liberties.”

The New York Post, owned by Rupert Murdoch, was not the only outlet to take her comment out of context. Trump tweeted a video of her sound bite juxtaposed with footage of a plane flying into the Twin Towers, and retweeted a comment that asked, “How is this woman walking the halls of Congress.” On Fox News, also owned by Murdoch, “Fox & Friends” host Brian Kilmeade said he wondered whether Omar, a Somali refugee and American citizen, was “an American first.”

In an open letter on Saturday, the Yemeni American Merchants Association said the Post‘s front-page display “provoked hatred” and “aims to harm Omar and her family and other people of the Islamic faith.” The Minnesota congresswoman has faced death threats over the past week, with a man in New York arrested after he said he would shoot her in the head. “This rhetoric threatens the safety and wellbeing of Omar, Muslim leaders, and the larger Muslim American community at a time when Islamophobia is at an all-time high,” the group added. Indeed, the two most recent FBI reports on hate crimes showed that anti-Muslim assaults are at record levels in the United States, hovering at three times higher than they did a decade ago.

The Yemeni American group told the Guardian its boycott of the Post was indefinite. “It’s not the first time that the New York Post basically spreads hate and fear in their newspapers,” Ayyad Algabyali, the group’s director of advocacy, said. “This might be for good.”

Today, that same community is banding together to reject sales of the NY Post at bodegas citywide.

This is what real unity (& NYC solidarity) looks like ⬇️ https://t.co/mj8vtA4Pv5