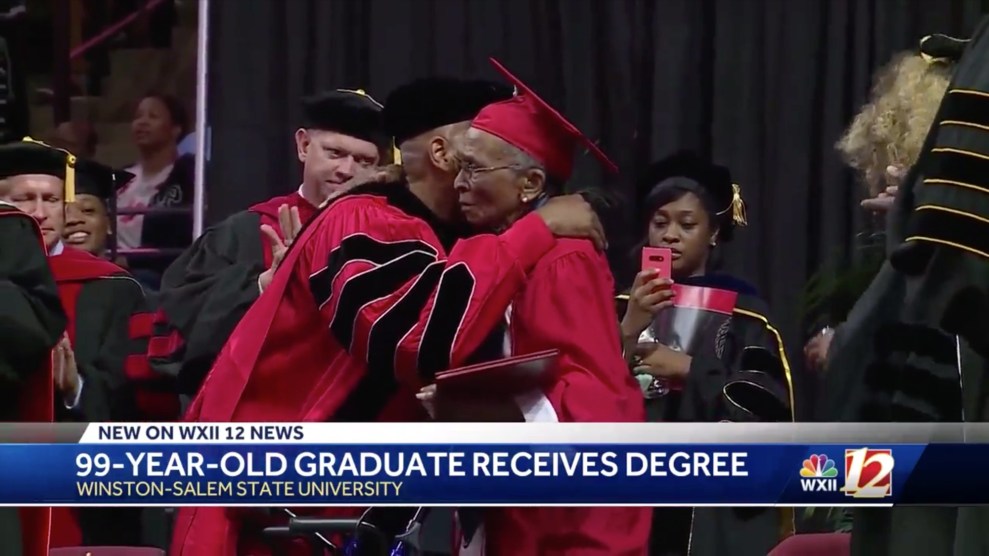 On the day of her college graduation in 1949, Elizabeth Barker Johnson had to teach and missed her ceremony. Though she eventually received her diploma in the mail, she often wished for a proper graduation.

Last Friday, at 99, she joined more than 1,100 graduates at Winston-Salem State University and walked across a commencement stage in full graduation regalia: robe, cap, tassel and all. She received an honorary degree in special education.

“I can’t explain how excited I really was,” Johnson, who taught in Virginia and North Carolina schools for more than three decades, told WXII 12 News.

A World War II vet who drove trucks and worked in a military post office in Europe, Johnson returned to the United States and was one of the first people on campus to enroll through the GI Bill. Her passion to help others propelled her through studies and a teaching career.

“To begin with I felt like dropping out, but then there were so many children who were not getting the help they needed,” Johnson said. “I felt like teaching school, I could reach more people who would listen to me than if I tried to choose a job among adults.”

On Friday, when Johnson rose to grab her walker, walk across the stage, and turn her tassel, she was greeted by a roar from row after row of college graduates. Not only was Johnson having her moment—she was also getting a standing ovation.

Here are some other Recharge stories to get you through the week.