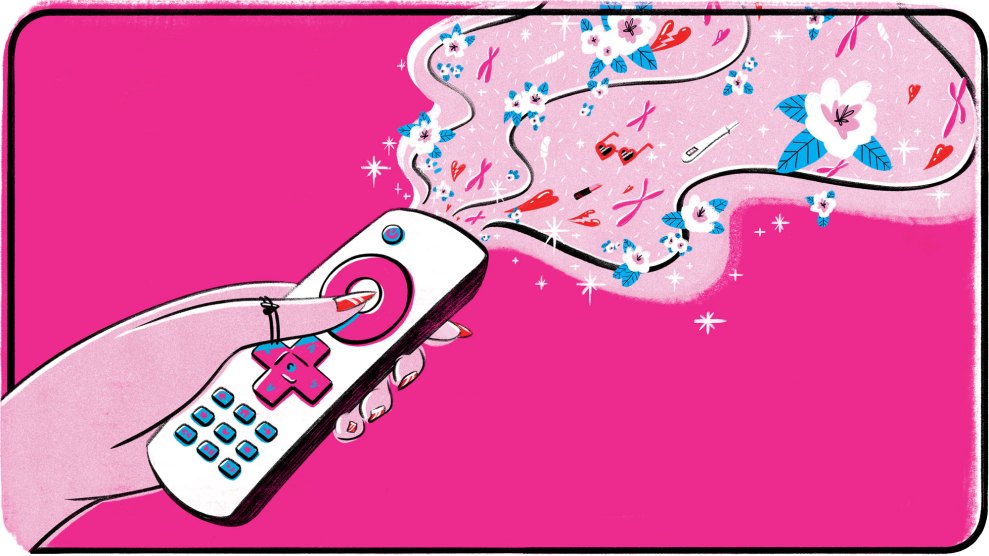 In 2016, I interviewed the showrunner of Jane the Virgin, Jennie Snyder Urman. She was smart and candid, and we had a good conversation about Jane, one of the most inventive, emotionally layered shows on television. But in my write-up, I said that Jane, which is about a 23-year-old Catholic virgin who is accidentally inseminated at a gynecological appointment, has a “silly premise.” I wrote that I’d called Snyder Urman up for a “little chat.” Even in the course of making the case for Jane’s seriousness of purpose, my language was trivializing, infantilizing. Would I have said that Mad Men has a silly premise? Would I have had a “little chat” with David Chase or Vince Gilligan?

Jane the Virgin is the sort of television that often gets called a “guilty pleasure,” code for “women watch this.” Jane lives with her religious grandmother and freewheeling mother; the three of them share a deep, enduring love of telenovelas. The show plays with telenovela tropes and themes, which means it’s heavy on the plot twists, but Jane’s genius is that for all the clever involutions and sweeping plots, it never loses touch with its essential humanity.

“It’s a show about a certain kind of TV that I feel like people often refer to in condescending ways,” Emily Nussbaum, the TV critic for The New Yorker, tells me. “I don’t think that people always have the language to talk about how they love the show without having that reflexive condescension—‘Oh, you know, it’s just for fun, it’s very silly, it’s a girlie show,’ and things like that.”

Listen to Pulitzer Prize-winning TV critic for the New Yorker, Emily Nussbaum, talk about loving television without shame, on this episode of the Mother Jones Podcast:

Nussbaum is the author of a new collection, I Like to Watch: Arguing My Way Through the TV Revolution. The book is full of that language she thinks we’re lacking in this Quality Television era: the language of loving wholeheartedly something to which the culture will only condescend. The essays add up to a necessary revisionist portrait of the past two decades. Sure, there were all those brooding, brilliant shows about difficult men—such shows always win the sort of accolades they are afforded by virtue of their masculinity. But Nussbaum’s unspoken project is to steer the “girlie” stuff into the realm of critical acclaim—shows like Crazy Ex-­Girlfriend, a clever meditation on mental illness whose tone shifts easily between heartbreaking and hilarious without giving the viewer emotional whiplash. Or Grey’s Anatomy, the seemingly endless medical drama that gave us Cristina Yang, who never apologized for her consuming ambition, not to mention its namesake, Meredith Grey, who evolved in ways an actual human might change over a 15-year period (give or take a plane crash). Or even Sex and the City, which deconstructed the romantic comedy as surely and as deftly as The Sopranos took apart the mob show, with an antihero to match. Here were the television programs doing what we might call the invisible labor of the revolution.

Jane lies at the spiritual heart of I Like to Watch. “There’s a level at which the entire book is created because of Jane the Virgin,” Nussbaum tells me. She likes the show so much that she’s watched the series through twice—once in real time, and again with her children, in preparation for the show’s fifth and final season. Her essay on Jane bristles with outrage that the world has taken “all this perfection for granted.” Nussbaum writes that the show is a “joyful manifesto” against the very idea of a “guilty pleasure,” a “bright-pink filibuster exposing the layers in what the world regards as shallow.”

But Jane was doomed to a niche audience, having been derived from art forms traditionally coded “female”—not just the telenovela but the soap opera, the rom-com, reality television, and the romance novel. The title is a woman’s name, followed by the word “virgin.” Jane the Virgin never stood a chance of being anything but a “guilty pleasure.”

So much of the history of the medium is contained within the self-repudiation of that phrase, “guilty pleasure.” The serial broadcast was historically girlie stuff, first on the radio and later on TV. Advertisers recognized that women were the main buyers of household consumer goods, and serial storytelling kept those women tuning in day after day. A great deal of regular programming was thus geared to the tastes and habits of housewives. As the sociologist David Morley has pointed out, this created a split in cultural attitudes about television consumption that reflected the split in the middle-class American home, which was and remains a sphere of leisure for men and a sphere of work for women. For the men, TV could be an uncomplicated pleasure, to be enjoyed freely after the workday; for the women, it was a pleasure to be sneaked throughout the day, distractedly, while doing household work—or even, yes, guiltily, while the housework went unattended. And when the family came together, guess whose tastes ruled the remote. Here’s how one woman explained it in Morley’s 1986 book, Family Television:

I feel guilty if I push for what I want to see, because he and the boys want to see the same thing, rather than what a mere woman would want to watch…If there was a love film on, I’d be happy to see it and they wouldn’t. It’s like when you go to pick up a video. Instead of getting a nice sloppy love story, I think I can’t get that because of the others. I’d feel guilty watching it, because I’d think, I’m getting my pleasure whilst the others aren’t getting any pleasure, because they are not interested.

Out of these domestic fault lines emerged the television “guilty pleasure.”

Popular criticism has only reinforced the gender dynamic. Anything pitched too frankly at women, and certainly any bit of daytime programming, was held to be lesser, frivolous. No form of TV has gone in for as much abuse of this kind as the soap opera, which was produced once upon a time to literally sell soap to housewives. But Nussbaum sees the soap as a sort of unappreciated mother of modern prestige TV. “Soap operas ran during the day, they were their own strata of TV,” Nussbaum says. “But the stories changed from episode to episode, the stories went on, and the characters changed over time and over years. That’s the model for a lot of modern ambitious television, and I often think that it’s kind of cut out of the story, and I think part of the reason is because it is marked as a shameful, feminine medium.”

A lot of Nussbaum’s criticism revolves around the ways that smart shows that take interesting risks are devalued, if not dismissed out of hand, if they have a female protagonist. She writes about falling in love with Buffy the Vampire Slayer in the late ’90s, a heady, joyful affair that set her on the path of television criticism. Buffy was an important show for reasons beyond its demon-hunting teenage-girl lead. It challenged the norms of what television could do. There was the silent episode; the musical episode; the decision to kill off the main character and then resurrect her; the entire sixth season, during which the Big Bad is a group of teenage boys propelled by a feedback loop of misogyny; the upsetting, complicated portrayal of a sexual assault attempt by a main character. The series is not without its flaws, but the mere fact that it was taking such big swings while building a mythology that still holds up in 2019 suggests there should be no guilt in enjoying its pleasures.

Except, as Nussbaum points out, “there’s this complicated thing about audiences and the perceived audience for a show. Even if a show is watched widely, sometimes there’s a sort of primal audience member—for a show like Buffy, it’s a teenage girl, and for a show like The Sopranos, it’s a middle-aged man.” And there is no group that mainstream culture takes less seriously than teenage girls.

Over the span of Nussbaum’s essays, an alternative canon begins to take shape. The shows that she celebrates tend to have overcome the burdens of genre conventions, say, or the critical condescension deployed along hidden contours of gender. Buffy, like Jane, like Sex and the City, is Nussbaum’s kind of TV. Circumscribed by genre, boxed in by the assumptions surrounding their audiences, these shows nevertheless used those limitations to do something brilliant and culturally significant. Think of The Good Wife and its deeply satisfying spinoff, The Good Fight; think of the Johnsons in black-ish; think of anything by Phoebe Waller-Bridge.

You can start to make out, in Nussbaum’s reconfiguring of the canon, a struggle for a different sort of liberation from a different sort of convention. Squint a little and the book starts to look like an allegory for women’s rights in the 20th century. She writes: “But when, as the years passed, TV began to warp—as comedies got sadder and dramas funnier; as primetime stories absorbed the serialized daytime model, allowing characters to change and stories to take bigger leaps; as dramas began to wrestle with worldly subject matter—TV didn’t abandon those tight, seemingly repressive genres. Instead, it worked off their restraints. It both resisted them and exploited them.” Like the women to whom it pandered and peddled soap and entertained all the while, popular television itself is the story of limits imposed and—on glorious occasion—limits transcended.