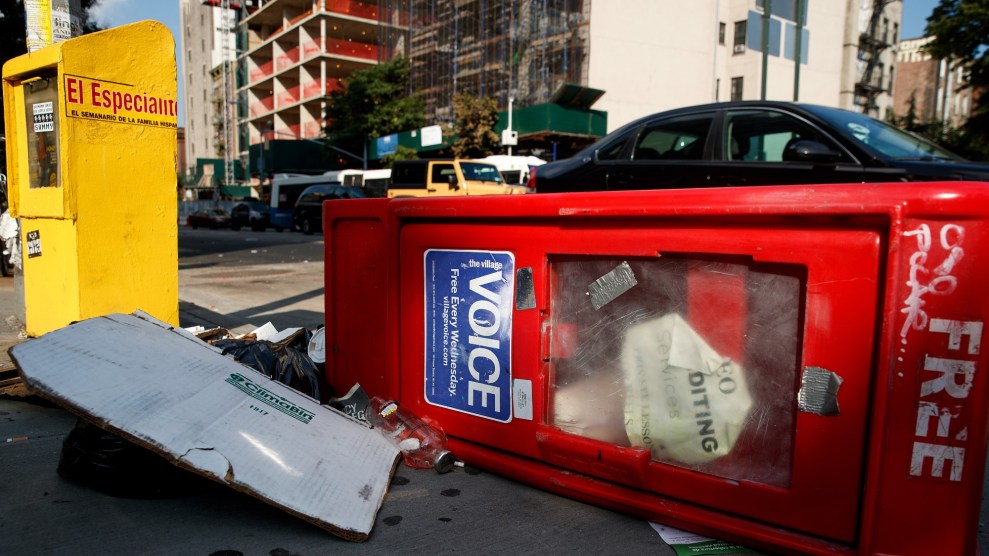 It only took a week for the novel coronavirus to ravage the alt-weeklies. In Portland, Oregon the Portland Mercury announced on Saturday that it would be temporarily ceasing its print edition and laying off 10 staffers. Reno News & Review announced last week that it is suspending publication indefinitely. Seattle’s The Stranger was forced to temporarily lay off 18 of its employees. The Coast, one of the very last alt-weeklies left in Canada, stopped its print edition and laid off 20 staffers. “It turns out, COVID-19 also makes for a nearly perfect weapon against alternative weeklies,” wrote Doyle Murphy, the editor-in-chief of the Riverfront Times, St. Louis’ alt-weekly. On Wednesday, the Riverfront Times temporarily laid off most of its staff and halted its print edition. Chris Keating, Riverfront Times’ publisher, summed up the whole situation appropriately: “This is absolutely fucking horrible—the worst-case scenario.”

Small businesses and workers are being completely devastated by the economic fallout caused by COVID-19. In the past week, bars and restaurants around the country have been forced to close doors and fire employees, as local governments implement mandatory closures to stop the spread of the virus. So many people have lost their jobs so suddenly that state unemployment websites have crashed as applications surge. But for alt-weeklies—the edgy, fearless muckraking weekly alternative newspapers that once dominated the local media landscape and often gave the more robust and resourced daily newspapers a run for their money—the end may be nigh. In just the past week, nearly 30 alt-weeklies have suffered severe financial losses. Many are asking their readers for direct support. Some have had to lay off staff, cut salaries, and scale back publication. And a few are looking at the end of years of invaluable local journalism.

Just last week, Lisa Cunningham, the editor-in-chief of Pittsburgh City Paper, and her staff were working hard to put out their annual Spring Guide. It was supposed to be 56 pages full of the best upcoming events for yinzers to get excited for as the seasons turn. It was also supposed to be a big money maker for the City Paper who, like most alt-weeklies these days, derive most of their revenue from advertisements from local businesses. “Not only did the events start canceling and we didn’t know what to do with our coverage, but a majority of our advertising pulled,” Cunningham told me.

In less than a week, City Paper lost more than 90 percent of the ads in its paper, Cunnigham says. The paper ended up printing a 32-page paper full of stories about how COVID-19 is affecting Pittsburgh, along with a desperate editorial from Cunningham: “Our entire city is facing the devastating results of the pandemic, and Pittsburgh City Paper is no exception,” she Cunningham wrote. “I’m gonna be totally honest: City Paper is in trouble.”

With the existential threat that the economic fallout from coronavirus poses for alt-weeklies, City Paper launched a membership campaign for readers to support the paper while it takes a huge financial loss, staving off layoffs or a complete shuttering of the 30-year old newspaper. That’s a model that a number of alt-weeklies have recently turned to as a way to stay afloat—even before the coronavirus crisis—but are now relying on as a stop-gap for more dire measures. Cunningham says City Paper had already been planning to launch a membership campaign, but the current situation forced them to put it together and make it public in a matter of hours. “The response has been overwhelming,” she says, estimating that they’ve reached about $10,000 in membership donations so far. “But we have a long way to go.”

Even before COVID-19 came around, the state of alt-weeklies was grim. “Well, things were already rough,” Cunningham told me, with a deep sigh. “So we’re used to overcoming some obstacles, but this one really hit us hard.” In 2017, after the Baltimore City Paper shuttered in a gross display of bottom-line consolidation by its corporate mega-owners, Tribune Publishing (then known, famously, as Tronc), Politico’s Jack Shafer eulogized the death of alt-weeklies, citing the decline in local ad revenue as the instrument of their demise. “Once the lowest-cost advertising vehicle in many cities,” he wrote, “alt-weeklies have lost that status to Web advertising, most notably in the classified ads and personals categories, where the mass migration from print to online has sapped all newspapers, alt-weeklies and dailies alike.”

To truly understand the tragedy of a future without alt-weeklies, it’s important to understand the role they serve—not just in local communities but in the journalism landscape. They’ve become outlets known to hold powerful people accountable (often times, when other outlets won’t), dogged investigations, eye-opening reporting, and the kind of off-color commentary and essays you really can’t find anywhere—on newsstands or on the internet. But they’ve also become something of a breeding ground for journalists, where some of the best writers and reporters in this business cut their teeth. At the Washington City Paper, where I was before I joined Mother Jones, an intimidating number of incredible journalists launched their careers or spent time in the newsroom—Ta-Nehisi Coates, David Carr, Katherine Boo, Jack Shafer, Jelani Cobb, and Kara Swisher, just to name a few. (And, of course, quite a few of my Mother Jones colleagues, including Aaron Wiener, Stephanie Mencimer, and Mother Jones’ Editor-in-Chief Clara Jeffery).

“We’re used to overcoming some obstacles, but this one really hit us hard.”

That’s the kind of loss that worries Chris Faraone, the editor-in-chief of DigBoston. “We do work that certainly can hang with any national outlets, and is often followed up on by those publications,” Faraone tells me. “But this stuff has to come from somewhere, people have to learn somewhere.” Faraone adds that the potential loss of alt-weeklies would be devastating—not just for the thousands of people who could be out of work, but for the role alt-weeklies serve in local communities. He cites the deeply reported, daring investigative features alt-weeklies have become famous for, like his long-shuttered alma mater the Phoenix, which reported on the Catholic Church sex abuse scandal a full year before the Boston Globe published its Pultizer-winning investigation.

Like most other alt-weeklies, DigBoston is also taking a big financial hit because of the coronavirus pandemic, and this week decided to indefinitely halt its print edition. “It’s really tough to see all these people in so much trouble,” Faraone says. “I don’t know if we’re in a better situation or a worse situation because we’re small,” he adds, noting that they’ve got a relatively small editorial staff of three, and instead rely on “a galaxy of freelancers” for their coverage*. DigBoston also partners with the Boston Institute for Nonprofit Journalism to help fund much of its journalism.

It’s a similar sentiment that’s keeping Cunningham and her staff going during this stressful time. And the outpouring of support City Paper has received since they launched their membership campaign has been heartening. “We’re having trouble sleeping,” she says, “and then we wake up and see the public telling us how much they support us, it’s really pretty much the only thing keeping us going right now.”