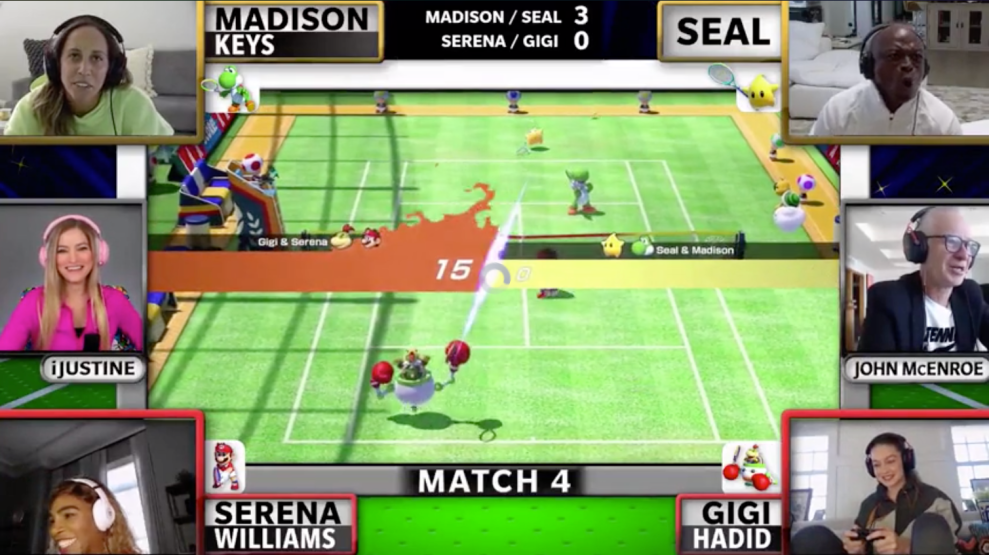 Screenshot of the Stay at Home Slam, an all-star tournament for COVID-19 charity on Facebook Live this weekendFacebook Gaming and Mario Tennis Aces

Like everyone else in the world, Venus and Serena Williams can’t play tennis to thousands of stadium fans right now. But they can play Tennis to millions of them. The superstar sisters lit up this weekend’s Mario Tennis tournament for coronavirus relief in doubles showdowns with fellow pros Maria Sharapova, Naomi Osaka, and Kei Nishikori, along with Seal, Steve Aoki, and other entertainers and fashion figures. The top team won $1 million toward a charity of their choice, and all other participants received $25,000 toward charities.

Seal kept shouting “boom!” each time he hit the ball, with live commentary from John “You Can’t Be Serious” McEnroe and YouTube’s iJustine. But the key highlights were the ballooning lobs, overhead smashes, lagging whiffs, and cartoonish unforced errors, everything a contest should be. The battle of thumbs, called the Stay at Home Slam, was livestreamed to 3 million viewers.

The big dollars went to No Kid Hungry, thanks to winning serves by Taylor Fritz and TikTok sensation Addison Rae. One day earlier, Serena gave an inspiring speech to students in an online graduation ceremony with stories about overcoming obstacles and taking risks. The 23-time grand-slam champion, despite not claiming Sunday’s title, is a supremely talented Tennis player.

The Catch. The most mythologized and celebrated grab in baseball history is just one piece of the sprawling puzzle that makes Willie Mays’ legacy: Game 1 of the 1954 World Series, a towering 450-foot drive to the wall, Mays sprinting back, fans erupting as the ball drifts overhead and lands in his outstretched glove. His over-the-shoulder catch-and-throw has been replayed millions of times. Play it today: Happy birthday to Mays, who turns one shy of 90. His new memoir is due out next week. Here’s that highlight. Watch below and let me know how you view it, and the catches after it, at recharge@motherjones.com.

On a roll. Enough with the fancy sourdough starters for homemade bread. Cinnamon rolls are the thing: A Portland family’s jumbo rolls raised $30,000 for a food bank after Whitney Rutz and her 7-year-old daughter posted a time-lapse video of a massive roll baking in their kitchen, to the salivating attention of friends, who wanted a sample. The first roll was auctioned off for $300; the second, $750. All proceeds go to Oregon hunger relief, with enough cash for 90,000 meals so far.

Nurses now. National Nurses Week starts today with stores and restaurants giving freebies and deep discounts to front-line workers on everything from burritos to beverages and shoes. The wave of support comes after the largest union of nurses protested in front of the White House to stand up for the thousands of health care workers infected due to the lack of protective gear.

#SolvingIt. The new weekly show #DearWorld Live is on a hot streak, last week tackling obstacles and opportunities for people with disabilities during the pandemic with guests Maysoon Zayid and five-time Paralympic athlete Tanni Grey-Thompson. Yesterday’s livestream focused on climate action, and next week’s episode takes on mental health and coping strategies in the era of COVID-19. Host Nelufar Hedayat highlights practical, on-the-ground solutions to global challenges every Tuesday at 10 a.m. ET.

Recharge salutes: Composer Anthony Davis for winning the 2020 Pulitzer for music for The Central Park Five, his operatic tale of racial injustice and the long march toward results; journalist Nikole Hannah-Jones for winning a Pulitzer for her essay “The 1619 Project”; Daily Show host Trevor Noah for paying his furloughed staff’s salaries out of his own pocket during the pandemic, including 25 staffers, from camera operators to stage managers; saxophonist Rudresh Mahanthappa, whose birthday was Sunday and who inspires new generations of improvisers with thunder; and 11-year-old Emerson, whose father tweeted about Em’s letter-writing penpalship with USPS carriers, with hand-decorated notes and creative envelopes thanking them for their service.

Recharge gets a recharge: We’re turning this newsletter into a daily blog next week! And we’re rolling out a daily newsletter with bits of everything, Recharge included. Stay tuned. I’ll leave you with these serene sands in Colorado from the National Park Service. Remember to say hey to Willie Mays today, and let me know how his catch holds up at recharge@motherjones.com.

#ParkedAtHome? Listen to the sounds of parks! From singing sands, to bugling elk, and claps of thunder, each park has a unique soundscape!