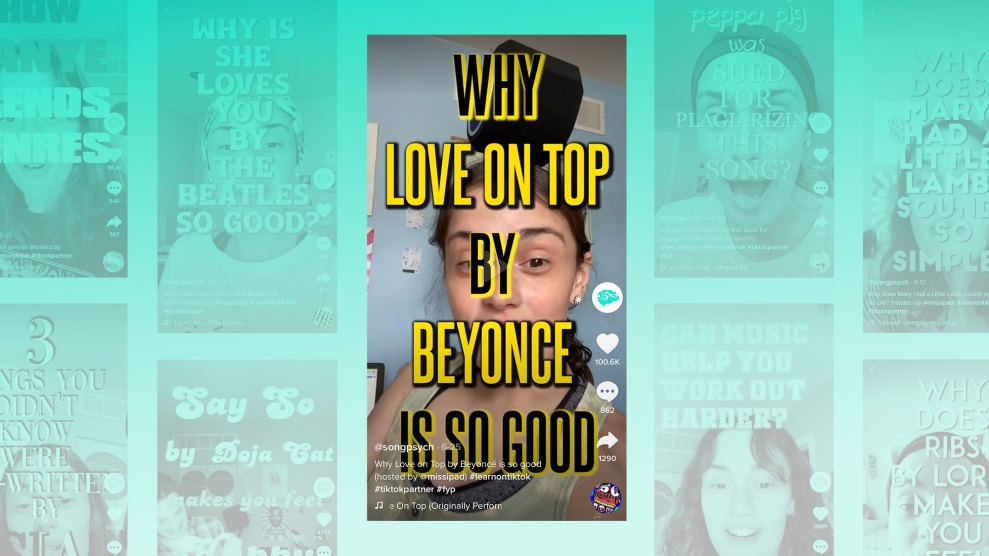 What is it about “Say So” by Doja Cat that makes you want to dance? Why does “Ribs” by Lorde make me feel nostalgic? What makes “Love on Top” by Beyoncé so good?  Music bombards our brains, causing us to feel—shaping our interactions with content, people, and ourselves—and, most of us, don’t know why any of it happens.

But Devon Vonder Schmalz does.

Schmalz runs @SongPsych, a popular TikTok account that is “breaking down your fav songs.” (It’s one of two social series under the production hub Good Content.) Each “episode” is a 60-second analysis of Big Music Questions—investigating the science and musicology behind TikTok hits like “Stunnin'” and “Say So” and old hits like The Beatles’ “She Loves You” and even “Mary Had a Little Lamb.” It’s also more than just song breakdowns. The 21-year-old also dives into questions like “How does music grow on us?” or “Can music help you work out harder?“

“Music is the type of thing that’s so intimidating to learn about,” she tells me over a video chat. “There’s so many complicated terms, people are pretentious about it—gatekeepers—and I just want to share music knowledge with people so that they can not think of it as something so inaccessible and hard to understand because it’s really not. Everyone loves music.”

How Music Grows On Us: Hosted by @missipad #tiktokpartner #learnontiktok #musictheory

Music is essential to TikTok. Users pick 15-60 second audio clips (“sounds”) to make dances, create trends, share jokes, and push videos onto others’ pages. Songs, cut up for content, go viral, sweeping through the app like wildfire—launching sometimes new, or even old, music into the Billboard charts. It makes sense that users would clamor to someone explaining the power of what they’re hearing.

Some of Schmalz’s work even directly addresses how TikTok is changing the way we listen. Ear worms result from using the platform, she explains in a video, because of the short nature of the loops you hear watching TikToks.

Today on SongPsych: How Music Gets Stuck In Our Heads (hosted by @missipad) #learnontiktok #tiktokpartner

TikTok’s reliance on music and sound is part of what made the app blow up so abruptly. When I asked Devon how, or even if, she thought music would change with TikTok, there was no doubt in her mind. “So much is gonna change,” she says. “The length of songs alone—no one’s gonna sit down and listen to a four minute song anymore.” Songs have already gotten shorter, and Devon thinks it’ll only continue. But song length isn’t the only thing she thinks will be changing. “The structure of when you need to hook people [will change],” she told me. “You have to start at 100 percent and then go to 200 percent.”

All this knowledge isn’t just going to this account: In a week from now, Devon will be dropping her debut EP, Rotisserie Pigeon. “What I’m doing for SongPsych has helped me sort of become more aware to like, what I should focus on in my music,” she says. “Making music has helped me look for things to analyze and other people’s music. Like, ‘Oh, how are they keeping my attention? How are they switching up their structure and vocal delivery? How are they pacing their songs that makes me want to listen to the whole thing?'”