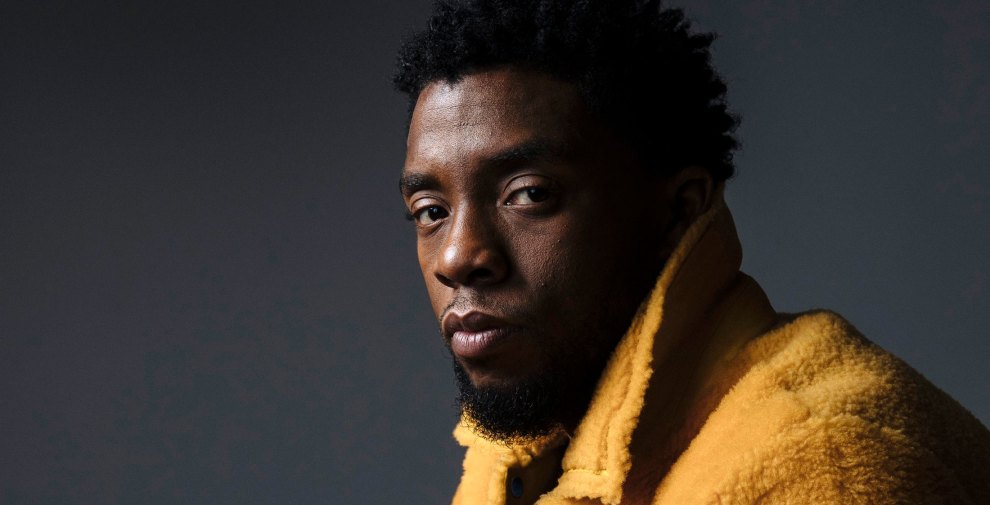 In this Feb. 14, 2018 photo, actor Chadwick Boseman poses for a portrait in New York to promote his film, "Black Panther."Victoria Will/Invision/AP

On Friday, I caught the TMZ alert no pop culture devotee wants to see.

Will 2020’s collective trauma never end? As if the nation’s mourning of the escalating 180,000 deaths from a virus that has disproportionately hit Black and Latino families the hardest wasn’t enough. As if the sudden death of basketball legend Kobe Bryant, his daughter Gianna, and their friends in a helicopter crash didn’t penetrate the soul of a young man who grew up watching Bryant’s highlight reel. A photo popped up on my Twitter feed of Boseman standing next to Kobe, two Black legends, the latter with a dark stain that complicated perceptions of his life’s accomplishments and legacy.

But Boseman’s life hadn’t been beset by scandal; the Hollywood tabloid world left his personal life untouched. We learned that he was born in Anderson, South Carolina, in 1976, the youngest of three. His father had worked for an agricultural conglomerate, his mother was a nurse. Boseman’s brothers were his role models. One became a preacher, the other a dancer who performed with the Alvin Ailey dance troupe.

One can tell just how startling Boseman’s death was by watching the unraveling of collective mourning. Writers and celebrities alike recall Boseman as a man of dignity, a gentle soul, a superhero, a Black man driven by conviction, coolness, and solemnity, his life cut short by a devastating disease.

Like many others, it left me wondering, “What could have been?” After learning of Boseman’s death, I watched Black Panther for the gazillionth time like so many others. Then I dug back into his catalogue: his stoic depiction of firebrand Jackie Robinson in 42—Boseman landed this first leading role at 35, a late-bloomer by Hollywood standards. And he soon landed several more. A sly, forceful portrayal of the brilliant Thurgood Marshall, and a rollicking yet complicated act as James Brown. At the time, I, naively cynical, saw his marathon of Hollywood features as Hollywood’s way of exploiting the attractive leading Black man to fulfill the biopics of our nation’s historic Black figures. Who was next, a revival of Muhammad Ali?

Yet I learned that Boseman loved Ali, and would have loved to play that role. As I look back on these characters, I’m realizing that, in a marker of his subtle brilliance, Boseman looked past the facade of those historical figures and accessed what lay beneath, the complications of lives lived. As New York Times writer Reggie Ugwu wrote in a 2019 profile of Boseman:

Boseman told me his method of humanizing superhumans begins with searching their pasts. He’s looking for gestational wounds, personal failures, private fears—fissures where the molten ore of experience might harden into steel.

For the role of T’Challa, a.k.a. Black Panther, that meant conceiving of a childhood squeezed by the weight of an ancient unbroken dynasty. When it came to becoming Jackie Robinson, he focused on formative years as a Negro League firebrand that crystallized the baseball pioneer’s polished exterior. James Brown: a meditation on irrepressible self-confidence, long starved by years of deprivation and insult in Jim Crow South Carolina.

“You’re a strong Black man in a world that conflicts with that strength, that really doesn’t want you to be great,” Boseman told Ugwu. “So what makes you the one who’s going to stand tall?”

In each of his roles, even in Black Panther‘s fictional King of Wakanda, Boseman, through his big, pearly white smile and intriguing energy, illuminated the depths of men pursuing justice and upending the status quo in his own way.

His Jackie Robinson, in one moment, would at the plate silently take the vile racist animus spewed by an opposing manager in front of a raucous crowd, and in the next would burst into the dugout, slam his bat into the wall, and bellow this guttural scream that shakes one’s soul. Boseman tapped into the unending pain Robinson must have felt.

And he just as easily embodied Thurgood Marshall’s settled rage as he’s mandated by a white judge to stay silent in the courtroom while he represents a Black man wrongfully accused of raping a white woman, a frustration that gives way to his powerful damning of injustice on the courthouse steps to reporters and, later, a memorable soliloquy that became his co-counsel Sam Friedman’s closing arguments. It marked an important snippet of time in Thurgood Marshall’s tale, one perhaps known more so for the other cases he pursued (like Brown v. Board of Education) and his tenure as the Supreme Court’s first Black justice.

In his compelling role in Da 5 Bloods, he served as Stormin’ Norman, the stand-in for the radical Black Vietnam-era soldier who fought for a country that hated him for the color of his skin. As the New York Times’ Wesley Morris wrote, Boseman “was in his way a historian—of other people’s magnetism and volition. Excellence and leadership spoke to and sparked him.”

And as T’Challa on Black Jeopardy on Saturday Night Live, in one of the funniest SNL segments in recent history, he taught us truly what a Karen was.

If his side-eye at Green Book was any indication, he made for an astute contemporary historian.

This look he exchanged with Michael B. Jordan when Green Book won best picture is the moment I realized Chadwick Boseman wasn’t just a beautiful and gifted performer, but also a shady king. We’ll miss you. Rest easy. pic.twitter.com/XrGp8Rejrf

It’s almost fitting that his role as the Black Panther most gripped the public consciousness. Boseman’s journey morphed from heroes of history into the literal fictional superhero that Black and Brown children could look up to. In T’Challa, Boseman found a complex figure who straddled between protecting Wakandans by keeping them isolated from the rest of the world, and offering the imaginary country’s innovations to aid in global progress. We saw a Black man lead a superhero franchise without parody, unifying people who desperately wanted to cross their arms and shout “Wakanda Forever.”

Little did we know Boseman had battled colon cancer while he shot that film, just as he would with Marshall and Da 5 Bloods. Little did we know that, like T’Challa, he took the hits and, in ways we couldn’t yet understand, sacrificed his well-being for public awe and happiness. (Neither Da 5 Bloods director Spike Lee nor Black Panther director Ryan Coogler knew about Boseman’s illness. Coogler wrote in his emotional tribute to Boseman that, “Because he was a caretaker, a leader, and a man of faith, dignity and pride, he shielded his collaborators from his suffering.”) If nothing else, his influence in such a short time is clear by the looks of joy and awe seen in Black and Brown fans who got the chance see him in person, as seen in a viral Jimmy Fallon clip:

This was amazing. @chadwickboseman surprises #BlackPanther fans while they say what the movie means to them. pic.twitter.com/ZXnfLuV83f

There’s a moment in Black Panther that will now and forever break my heart. As T’Challa, Boseman lay unconscious in a mound of snow after being thrown off a cliff in a battle against Killmonger. T’Challa’s mother, his love interest, and his genius sister praise the ancestors as they covered his bloody face in snow in the hopes he could be revived. He ventures off to a mystical ancestral plane, its once-deep purple skies now bright. T’Challa, adorned in white, turns to his fictional father, T’Chaka, who tells him: “The time has come for you to come home, to be reunited with me.” But T’Challa refused and condemned the ancestors for turning their back on the rest of the world. He decided he must return to right the wrong.

In just eight years, Boseman expanded the way we think about men who loomed large. So few leading actors can transform from the embodiment of the civil rights struggle to a costumed pursuer of justice in an unjust society, marked by his own complications and expectations. Questions swirled as I marveled at what could have been—a young John Lewis? James Baldwin?—and what was supposed to have been—T’Challa part deux? As I watched Black Panther once more over the weekend, I kept sincerely wishing Boseman could wake up again from this terrible dream just as T’Challa had.