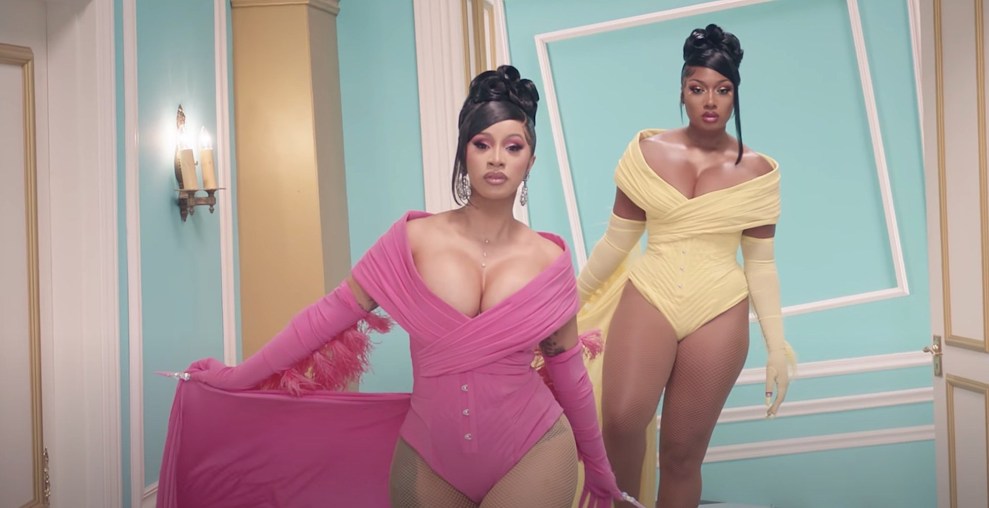 Last week, rappers Cardi B and Megan Thee Stallion released a collaboration called “WAP,” which stands for “wet-ass pussy,” and American Flag Emoji Twitter went apocalyptic. The rap superstars’ latest song was a celebration of vaginas, sexual arousal, and their use of either to get men to buy them rings and pay their tuition. Many people streamed the song and watched the music video lamenting the fact that the virus would keep us from properly enjoying it with our friends. Conservatives treated the song as some kind of personal affront.

This was odd. Surely “WAP” wasn’t the first explicit song they’d ever heard. Why the meltdown when there is so much other stuff going on? I think I have an idea, and it has something to do with all that other stuff. The song was about Black bodies, and in the past few months white conservatives have made it clear that our bodies are supposed to be for labor, not for our own enjoyment.

Just look at these responses. DeAnna Lorraine, who previously ran for Congress against Nancy Pelosi, called the song “disgusting and vile” and linked Cardi B to Democratic senators.

The Democrats support this trash and depravity!

James Bradley, who is currently running for Congress in California, claimed he “accidentally” heard a song that had yet to be released on the radio and decided to drop some racist tropes about Black dads.

Cardi B & Megan Thee Stallion are what happens when children are raised without God and without a strong father figure. Their new "song" The #WAP (which i heard accidentally) made me want to pour holy water in my ears and I feel sorry for future girls if this is their role model!

Perhaps most comical of all was Ben Shapiro, conservative talk show host and avid tweeter, reading the lyrics aloud on his show. Shapiro was so horrified by such a brazen display of women enjoying sex that he censored the word pussy, giving meme makers the gift of the phrase “wet-ass p-word.”

The message seemed to really offend the talk show host. “Pay my tuition just to kiss me on this wet-ass pussy,” Megan Thee Stallion raps. “This is what feminists fought for!” Shapiro says incredulously. “This is what the feminist movement was all about.”

While Shapiro and the others were busy wringing their hands about feminists indoctrinating children with scary rap lyrics, the country remains in serious crisis, especially for Black and Brown people.

The coronavirus has killed approximately 165,000 people and infected 5 million more in the United States. The federal government has done little to slow the spread and instead has punted on unemployment benefits for the millions out of work, demanding that local governments open their businesses and their schools with almost no regard for who will be disproportionately impacted by these catastrophic failures.

Some schools have already opened their doors to students, and early results have provided a glimpse into potential outcomes for administrators that have not yet decided on how to start the academic year. And while much of the focus has rightly been on how teachers will fare once they are forced to spend eight hours indoors with a large group of students, there are also the maintenance staff, cafeteria workers, and bus drivers to consider—people who skew Black and Brown who will likewise be forced to expose themselves to the virus.

On the college level, it’s more of the same. Republicans, conservatives, and school officials are pushing for college football to start on time, as if it’s the single thing that can beat the coronavirus, as opposed to a violent sport that many young Black men play for free while other people get rich off of them.

America needs College Football! It’s important for student-athletes, schools, and our Nation. These Great athletes have worked their whole lives for the opportunity compete on the college gridiron and they deserve the chance to safely get back on the field! #WeWantToPlay 🏈🇺🇸

In Florida, according to the New York Times, the virus is killing young people at an alarming rate. But not because they’re out drinking at the bars or partying on the beach—the preferred narrative since the beginning of the pandemic—but because they’re working. And just like the virus is having a bigger impact on communities of color, the number of young Black people killed by the virus because they were unable to enjoy the luxury of working from home is disproportionately higher than that of their counterparts.

People of color are more likely to have jobs that are considered essential and require coming into contact with others throughout the day. They’re more likely to be transit workers, letter carriers, restaurant servers, delivery drivers. They’re also more likely to get sick and die compared to their white counterparts.

And all of this is fine to the conservatives. In fact, it has been central to all their clamoring for “reopening” the economy. In their ideology, we should all be thrilled to go back to work and sacrifice our bodies for the stock market. People who don’t want to risk their lives to serve expensive cocktails or wrangle children all day are deemed lazy. Needlessly getting sick and dying for your country is an honor. But rapping about sex is “disgusting and vile.” Rapping about sex while being women is a national crisis. White reactionaries don’t mind when disgusting and vile liberties get taken with a Black or Brown body so long as they’re the ones taking them.

You can almost understand the freakout. Their worldview is being contested on a daily basis by millions of people, each new revelation like a knife to the heart of their ideology. For months, they watched as communities of color took to the streets to demand racial equity. Their monuments to white supremacy are being toppled, and their police force is being questioned. White hegemony over American institutions—the workplace, the schools, the media—is being challenged. And now here were two Black women rapping about their own sex appeal when we’re supposed to be risking life and limb to prop up a country collapsing in on itself. What else could it feel like to the white conservative but yet another wound?