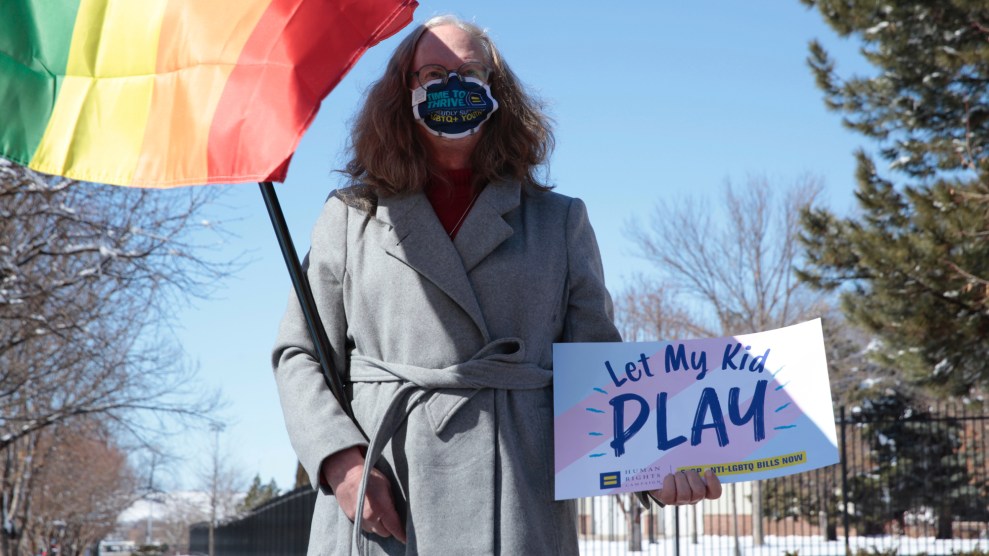 On Thursday, the governor of Mississippi signed into law a bill that prohibits transgender athletes from competing on women’s sports teams, making it the only state with such a law in effect. According to the Human Rights Campaign, there are more than 100 anti-LGBTQ state-level bills up for debate this year. At least 44 of those would bar trans women from sports.

As I previously reported:

Though the Mississippi proposal isn’t explicit about how it’d be enforced, other states’ bills call for athletes to undergo blood tests and examinations of primary and secondary sexual organs to prove they belong on the women’s team. Not only is this discriminatory against trans athletes, advocates say it could lead to invasive genital exams being forced upon any female athlete who doesn’t look “feminine” enough.

Gillian Branstetter, media manager for the National Women’s Law Center, says cisgender women with naturally higher testosterone levels could be targeted (case in point: Caster Semenya). Tall women could be targeted. Black and Brown women who don’t fall within the western aesthetic of femininity could be targeted. “It’s all in the name of hurting trans people for a perceived political gain,” Branstetter says. But “there is no crisis that these bills are seeking to address.”

A similar sports ban is currently sitting on the governor’s desk in South Dakota. On Wednesday, Gov. Kristi Noem signed a “religious freedom” bill into law, which critics say is likely to be used as a shield for the religious right to discriminate against the LGBTQ community. There’s little doubt she’ll also sign the sports ban.

Idaho passed its own law banning trans kids from athletics last year, which was promptly challenged in court. A federal court has temporarily blocked the law, while lawyers on both sides debate its constitutionality. LGBTQ advocates, nearly 200 athletes, and the NCAA are all vocal opponents of the law, arguing that it’s discriminatory toward transgender athletes.

Other bills currently working their way through state legislatures are seeking to prohibit transgender kids from accessing gender-affirming health care, such as hormone therapy or puberty blockers. At least two states are still considering “bathroom bills,” which were largely defeated in the wake of North Carolina’s ill-fated 2016 bill.

Sasha Buchert, senior attorney and co-director of Lambda Legal’s Transgender Rights Project, described the spate of anti-trans legislation as “the latest in a vicious and unending campaign to strip our communities of their rights and dignity. Having failed to ban us from bathrooms and to deny us equal protection in the workplace, they now have turned to going after transgender children, a new, but sadly unsurprising, low.”

You can read more about these bills, their origins, and the folks most affected by them, here.