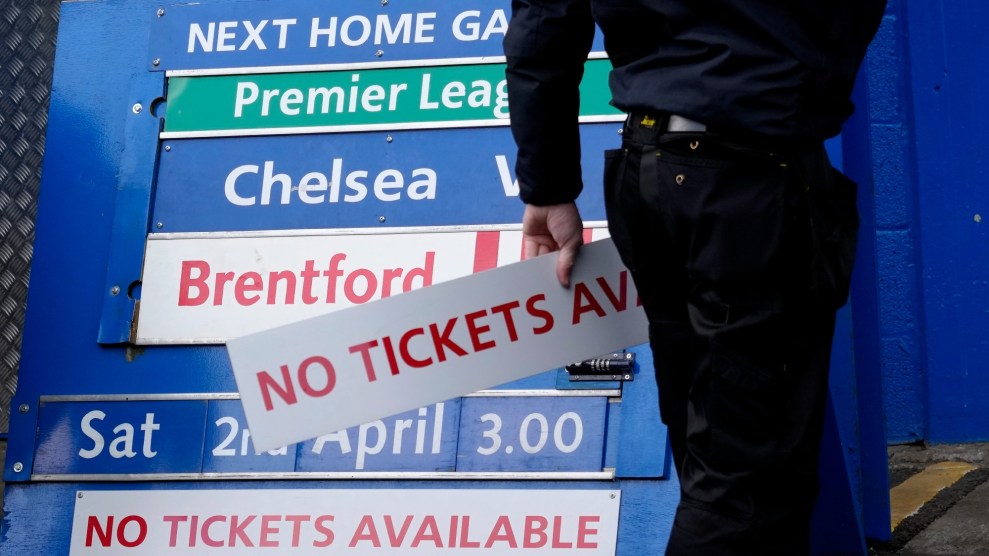 There is no shortage of people whose lives have been upended by the Russian invasion of Ukraine. Nearly 3 million Ukrainians have had to flee their country. More than 1,000 of them have been killed. Tragedies of this magnitude affect every corner of our interconnected world and demand, at best, a healthy dose of empathy and, at worst, some kind of reality check.

Unless you are Chelsea, the London soccer club owned—until recently—by Russian oligarch Roman Abramovich, who tried (and failed) to pull off one of the most callous moves of sports bullshit in recent memory today.

First, some context. In 2003, Abramovich bought the English football club Chelsea. In the years after, his goal and timeline were clear: “World domination by 2014.” And, basically, it has worked.

Over the last twenty or so years, Abramovich has poured money into Chelsea. His wealth has transformed it from another contender in the English soccer pyramid to a perennial champion. Chelsea have won 18 major trophies since then, the most of any English club during that time. And it’s redefined how football works. Abramovich’s fortune—built from Putin’s kleptocracy—set the model for a slew of nation-states to buy football clubs. Just ask Manchester City, or Paris Saint-Germain, or Newcastle. (Or, actually, don’t ask Newcastle: Their manager wouldn’t even answer if the killing of 81 people in Saudi Arabia was wrong because, well, Newcastle is now basically owned by Saudi Arabia.)

This rush of other nation-states into football has somewhat dulled Chelsea’s supremacy. But not too much. They are currently champions of Europe. Their last major trophies was just a few months ago, back in February. On that day, as Abramovich looked down from the stands, the club won the FIFA Club World Cup, completing “the lot” under the Russian—they’d won every single major trophy during his reign.

Less than two weeks later, Russia invaded Ukraine. And since then, it’s all gone to shit.

Abramovich’s ties to Putin have always been hard to write about. As David Klion describes in an excellent profile in Jewish Currents:

The reserved, gray-bearded Abramovich is notoriously litigious toward critics who seek to detail his close ties to Putin. Last year, he successfully sued the British journalist Catherine Belton, who claimed in her 2020 book Putin’s People that the Russian president dictated Abramovich’s major purchases, including his decision to buy Chelsea. He also extracted an apology from a British newspaper for calling him a “bag carrier” for the Russian president.

But, since the invasion, Abramovich’s free reign in London came to an end. After intense pressure, the British government finally took action.

Last week, the United Kingdom sanctioned Abramovich, meaning his various assets, including Chelsea, were effectively frozen. With its financial backer in legal limbo, Chelsea was permitted to keep playing games and paying its players, but could not sell tickets or merchandise.

Now, here’s the part where, if you are Chelsea, you eat it. You take the hit and move on. You’ve lived and been rewarded—as fans and as a club—by the money that is fueling a war and you admit, hey, that was fucked up.

But, no. They did not do that. Chelsea instead acted like idiots. They drew a line in the sand over a domestic cup match this weekend against Middlesbrough, a club in the second division of English soccer. The club sent out a public request that Middlesborough not invite their fans, too. “It is important for the competition that the match against Middlesbrough goes ahead, however it is with extreme reluctance that we are asking the FA board to direct that the game be played behind closed doors for matters of sporting integrity,” read a statement on Chelsea’s website.

Oh, an unfair advantage? Of having less fans than the other side? That’s an insane statement from  Chelsea, a club still (technically) owned by a Russian apparatchik, a club that last year tried to launch a breakaway league, a club with quite possibly the most shameless fans on Earth—that now suddenly cares about “sporting integrity.” Give me a break!  As Steve Gibson, the Middlesbrough chairman, said: “Chelsea and sporting integrity do not belong in the same sentence.”

Chelsea’s appeal was so remarkably tone-deaf that it did something not even Abramovich’s billions could do: make Boris Johnson’s government look good! In response to the club’s bizarre demand, an anonymous UK official told Politico that, in short, Chelsea should get lost.

Get lost, they did. After “constructive talks” with the FA, England’s governing authority for professional football, Chelsea quietly rescinded its request.

With apologies to the many fans who were dying to watch the Blues take on the eighth-ranked squad in the EFL Championship, there are bigger problems in the world. Take a cue from your government and “spend less time” worrying about one game and more time rooting for your team to not be run by a warmonger.

The best kind of sporting integrity is not punishing your opponent for your oligarch owner’s bill finally coming due.