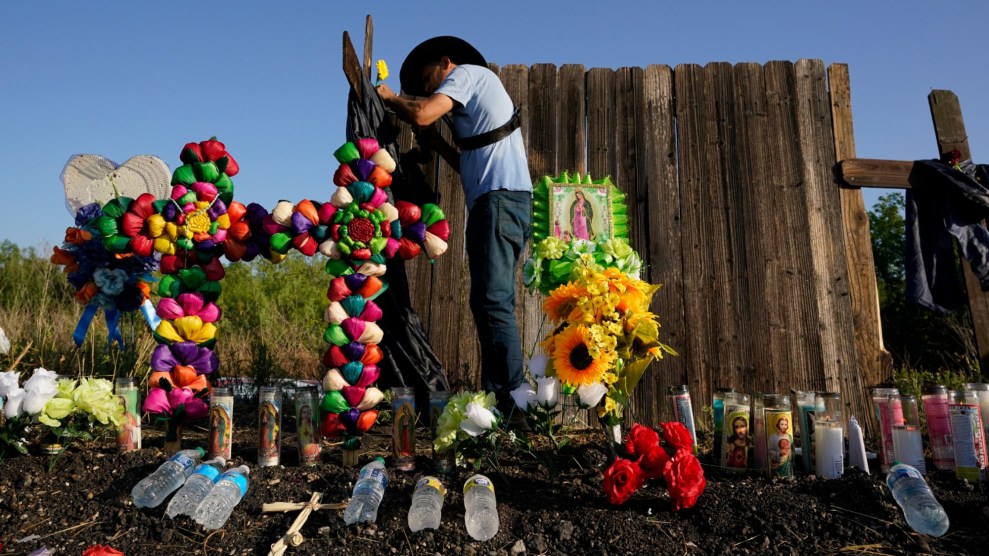 Makeshift memorial at the site where officials found dozens of people dead in an abandoned semitrailer.Eric Gay/AP

On Monday, at least 46 bodies were found inside a tractor-trailer near the Lackland Air Force Base in San Antonio, Texas, and another 16 people were hospitalized in what authorities have characterized as the deadliest migrant-smuggling operation in US history. By Wednesday, the death toll had reached 51. “They were suffering from heat stroke and exhaustion,” San Antonio’s Fire Chief Charles Hood said about the victims, who were migrants from Mexico, Guatemala, and Honduras. Three people were taken into custody in connection with the incident and Homeland Security Investigations is leading the probe into the case.

Not the first time migrants have died in a tractor-trailer in Texas. Probably won't be the last time. pic.twitter.com/3FKVU0i5w2

“Exploiting vulnerable individuals for profit is shameful, as is political grandstanding around tragedy,” President Biden said in a statement about the migrant deaths, “and my administration will continue to do everything possible to stop human smugglers and traffickers from taking advantage of people who are seeking to enter the United States between ports of entry.”

But that hasn’t stopped Republican politicians and anti-immigration demagogues from seizing on the dreadful event to blame the loss of lives on President Joe Biden’s immigration policies, which they describe, inaccurately, as “open borders.” It was, in fact, another inevitable consequence of the deadly and ineffective legacy of decades of both Republican and Democrat policies of “prevention through deterrence” and militarized borders. Nonetheless, Stephen Miller, Donald Trump’s former senior adviser and a heartless anti-immigrant crusader who fostered the infamous zero-tolerance policy that separated families at the border, attributed the “incomprehensible tragedy” to “vile, monstrous and utterly depraved” open border policies that, according to his twisted reasoning, are somehow “pro-smuggling, pro-cartel.” It goes without saying, but I’ll say it anyway: this line of reasoning makes no sense.

As Mother Jones has previously reported, strict border policies such as the Trump-era Title 42 health order sealing the border for most migrants and asylum seekers forced people to take increasingly dangerous and riskier routes and have fueled smuggling activities. Albeit belatedly, the Biden administration has tried to end the harmful policy implemented by Trump at the outset of the pandemic, but court challenges have forced the government to keep it in place. According to Aaron Reichlin-Melnick, policy director at the American Immigration Council, 2022 already has been the deadliest year at the border:

2022 is the deadliest year at the border ever. At least 46 dead just in this one truck. Hundreds have already sided crossing the border so far this year, including children.

And with a renewed rise in boats from Haiti, mass casualty events will become more common. https://t.co/nEAXE2NOTx

Still, the chorus of Republicans exploiting this event included a number of those whose very policies and anti-immigrant stance have contributed to a deadlier border. Texas Gov. Greg Abbott, for instance, who has repeatedly targeted immigrants, including by busing them to Washington, DC, in various stunts that backfired, and who funded a failed operation to “secure” the border, said, “These deaths are on Biden.” Meanwhile, Texas Sen. Ted Cruz, no friend of immigrants who has introduced legislation to transfer migrants from Texas to places “where Democrat elites host their cocktail parties,” asked, “How many more people have to die before Dems give a damn?”

Not to be outdone, Sen. Marco Rubio from Florida tweeted “There is nothing compassionate about Biden’s open border policies that encourage human trafficking.” Fox News also focused on compassion as if the network’s programming didn’t rely on the dehumanization of immigrants on a regular basis. The Border Patrol Union, whose president recently spread conspiracy theories surrounding the racist idea of “great replacement,” also jumped on the outraged bandwagon.

“Loud anti-immigrants who peddle false info about the border share responsibility for this tragedy,” Monika Langarica, a staff attorney with UCLA’s Center for Immigration Law and Policy, wrote. “So do the Republican states that brought the case that blocked the end of Title 42, which has closed safe pathways to the asylum system, and funneled people into deadly non-choices.”

To be clear: closed borders are causing people to die. That has been the case for decades as violence and death as a means to prevent migration have been factored into policies that have largely failed to manage migration flows in the long run, but have succeeded in producing casualties. As long as anti-immigrant hardliners and different administrations continue to advocate for tough-on-border policies and further militarization, the same outcome will repeat itself. As Jean Guerrero wrote in the Los Angeles Times, “The border has become a mass grave and a testament to the decades-long inhumanity and irrationality of US border and immigration policies.”