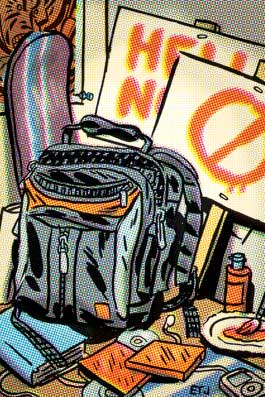 Protest of the Year When Senate majority leader and Princeton alum Bill Frist threatened to go nuclear in the battle over judicial appointments, students at his alma mater responded by staging the mother of all filibusters. It began quietly enough, with eight students in cheap suits gathering in front of the Frist Campus Center to give dramatic readings of the campus phone book. The filibuster soon took on a life of its own, attracting a stream of students, professors, and a Nobel laureate, who ran down the clock reading Waiting for Godot and reciting pi to 3,500 digits. Within a week, the phenom had gone national, with copycat protests on 50 campuses in 35 states, from UCLA to Bates College. Even the theatrically challenged Democrats were quick to recognize the value of a good publicity stunt. The 384-hour gabfest wrapped up with a “fili-bus-tour” to Washington, D.C., where guest bloviators Senators Chuck Schumer (D-N.Y.) and Jon Corzine (D-N.J.) joined in.

Student Activist of the Year Appalled at the Bush administration’s foot-dragging in the face of genocide, last September Georgetown junior Nate Wright cofounded Students Taking Action Now: Darfur (STAND) and quickly launched a movement. By February there were 80 STAND chapters in 24 states, with thousands of students raising relief funds and lobbying Congress to pass the Darfur Genocide Accountability Act. After traveling to Chad to make an MTV documentary on refugees fleeing Darfur, the 21-year-old history major is confident that STAND’s combination of political pressure and direct aid will save lives. “It doesn’t take a whole lot,” he says, “to really make a difference.”

Victory of the Year A penny a pound was all they asked. After a four-year, nationwide boycott in which the University of Chicago, Notre Dame, and 19 other schools forced Taco Bell off their campuses, the “Boot the Bell” campaign declared victory in March as the fast-food chain finally agreed to boost the sub-poverty wages of the Florida laborers who pick its tomatoes. The 3,000 members of the Coalition of Immokalee Workers will now receive an extra cent for every pound of tomatoes picked—pocket change for the chain but a big boost for the pickers. Coalition leader and Mother Jones‘ July/August 2004 Hellraiser Lucas Benitez called off the boycott that had targeted Taco Bell’s core consumers, officially freeing socially conscious college kids to eat MexiMelts guilt-free.

Kicking the Can Things got shaken up at Coca-Cola’s annual shareholders meeting in April when 15 students from Hofstra, Smith, Rutgers, Union Theological Seminary, and other schools challenged the company’s human rights record. Speaking as shareholder proxies, the students demanded that Coke CEO E. Neville Isdell address a recent lawsuit linking the company to the murder and harassment of union leaders at its bottling plants in Colombia. Hofstra junior Vanessa Cudabac spoke for several minutes over Isdell’s protestations. “And there was nothing [he] could do about it,” she recalls. Like “Boot the Bell” before it, the “Killer Coke” campaign aims to get colleges to kick their Coke habits. Rutgers and UTS have already canceled their contracts; more campuses are expected to follow suit.

Thanks a Million In early April, 20 students at Washington University in St. Louis launched a small protest against low wages for the school’s food-service and janitorial workers. This morphed into a five-day hunger strike, a three-week occupation of the admissions office, and a series of rallies that brought administrators to the bargaining table. The school agreed to commit $1 million to improving hourly employees’ wages and benefits over the next two years. “It’s a lot of money to raise in 19 days,” said 21-year-old organizer Danielle Christmas.

That’s Why They Call It the Blues University of Michigan students gave new meaning to their school’s rallying cry, “Go Blue,” by registering 10,000 voters in a monthlong registration drive in the lead-up to the 2004 presidential vote. The effort produced record youth-voter turnout in Ann Arbor, keeping Michigan in Kerry country, even though unprecedented numbers of college-aged voters across the nation failed to turn the crimson tide.

Home Court Disadvantage George W. Bush’s public appearances are usually tightly scripted love fests for the prescreened faithful, so he probably anticipated a warm welcome when he went to evangelical Calvin College in Grand Rapids, Michigan, to deliver a commencement address in May. Instead, respectfully defiant students turned out wearing buttons declaring: “God is Not a Democrat or a Republican.” And 800 students and faculty signed an open letter telling Bush, “Your deeds, Mr. President—neglecting the needy to coddle the rich, desecrating the environment and misleading the country into war—do not exemplify the faith we live by.”

Invisible Freshmen Last November, 250 African American UC Berkeley students staged a daylong “Blackout” to protest the precipitous decline in black student enrollment since Cal banned affirmative action a decade ago. Out of last fall’s 3,600 incoming freshmen, only 3 percent were African American. Dressed in black, the protesters silently interrupted classes to distribute fliers demanding the school step up its efforts to recruit black students. “It’s hard being the only black person in the class,” said senior Raniyah Abdus-Samad. “It’s not a good feeling.”

Violent In-Tent A peaceful protest took a nasty turn on April 18, when a couple hundred University of California-Santa Cruz students staged a camp-in at the university’s main gate to protest education cuts and rising tuition costs. That night, cops stormed the tent city, forcibly disabled resisters with painful neck holds, and arrested 19. Happy ending: “Tent University” was back up the next day, and no charges were filed against those pinched by the fuzz.

Unjust Desserts This year witnessed a rash of on-campus pie-ings of notable conservatives. At the Quaker Earlham College, an unpacifistic religion major pied William Kristol and issued a manifesto, “Why I Threw the Pie.” Pat Buchanan got gooped at Western Michigan University and David Horowitz was handed an excuse to decry “fascists” after he was splattered at Butler University. A University of Arizona student claiming membership in the tastelessly titled “Al Pieda” nearly hit Ann Coulter with a cream pie, making the half-baked claim that he was “throwing the pie at her ideas, not at her.”

The Thought That Counts Last fall, Stanford sophomore Quinn Wilhelmi and grad student Kai Stinchcombe were looking for a way for campus progressives to get out of the postelection doldrums. Their solution was to found the Roosevelt Institution, a student-run think tank modeled after their campus’ own Hoover Institution, but without all the right-wingers or buckets of cash. They soon found they weren’t alone: Fellow wonks on other campuses were putting together their own DIY policy shops, and by spring more than 20 campuses had opened chapters of the Roosevelt Institution. The budding brain trusts’ first assignment: getting beyond the drawing board